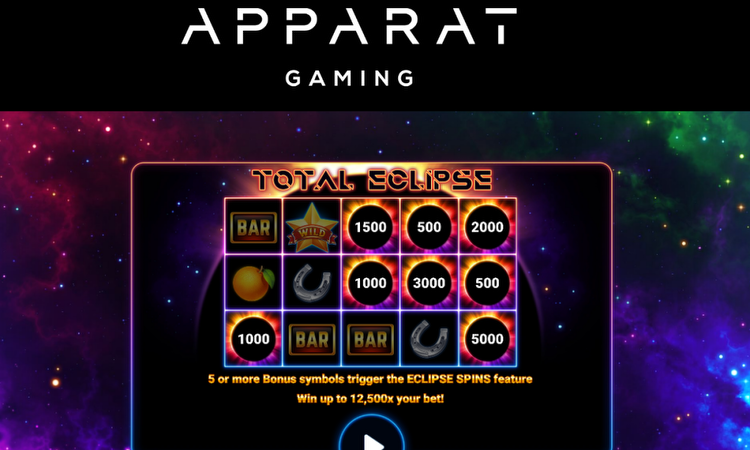 Apparat Gaming, the developer of slots with a German accent, is exciting players with a rare phenomenon in its latest release, Total Eclipse.

Total Eclipse combines the simplicity of classic fruit games with the power of the Hold-and-Respin feature to deliver an edge of the seat player experience.

The 5×3 reel, 10 payline game does away with complicated win lines so what you see is what you get. But that’s not to say there aren’t a few surprises in store, including a Star Wild symbol that substitutes for all other symbols for added big win potential.

Then there are the Eclipse Symbols that trigger the Eclipse Free Games feature when five or more land anywhere on the reels during the base game. Each Eclipse symbol has a prize value, and these continue to land while the Free Games play out. At the end, their value is combined and added to the win.

While the Free Spins feature is active, the reels transform from 5×3 to 15 single symbol reels. The player then receives three Respins and any new Eclipse symbol that lands will be held into position until the end of the feature. The respins counter is also reset to three.

Total Eclipse has been certified for launch in core regulated markets including the UK, Denmark, the Netherlands, Greece, Bulgaria, Isle and Man, Malta, Portugal, Romania, Spain, Sweden, Switzerland and of course Germany.

Alina Dandörfer, Co-founder and Director at Apparat Gaming, said: “Seeing a total eclipse is a rare and utterly incredible phenomenon, but with our latest game players can enjoy the same thrill and excitement whenever they like. Of course, it also provides plenty of big-win potential.

“We look forward to seeing players land those all-important Eclipse symbols and watch as the reels transition and the wins come in.” 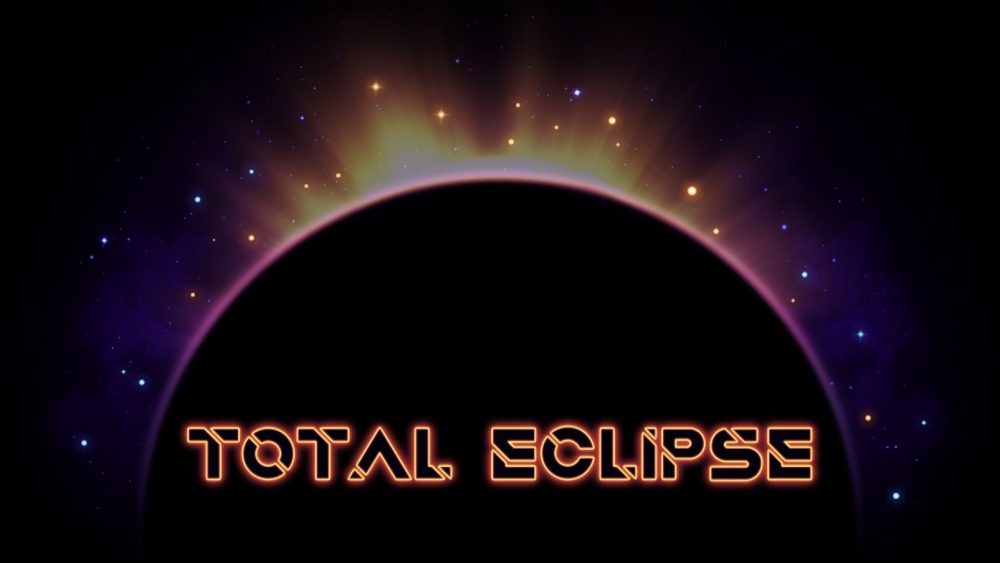 Relax Gaming is teaming up with German slot developer Apparat Gaming. Relax Gaming will be featured as part of the Powered by Relax platform. Apparat Gaming has a Malta Gaming License and launched in July 2021. The company has unique titles such as Pharaoh Princess, 40 Sevens, Total Eclipse, and Fruit Storm. It is planning to introduce its products to established and licensed German operators.
Law ・ 5 days
World Casino News

Pariplay Ltd has added German casino software developer Apparat Gaming to its Ignite partners. Pariplay has already launched two of Apparat's games, Fruit Storm and Pharaoh Princess. Two additional titles, 40 Sevens and Total Eclipse, are to be introduced later in June as part of the developer's roadmap for 2022.
Law ・ 9 days

iSoftBet has added a new game to its portfolio of proprietary titles. Rising Samurai: Hold & Win features expanding reels, free spins and a Japanese throwing star. iSoftbet is a provider of casino software and content. isoftbet has a portfolio that includes games for both online and mobile.
Bonuses ・ 15 April 2022
Super Slots Casino

iSoftBet has released a new game, Rising Samurai: Hold & Win. The game has 576 ways to win in the base game and 3,087 ways during the Free Spins round. Four Samurai Warriors are the top-paying symbols in this game. Five Samurai coins are required to trigger the Hold and Win Respins. There is a random Katana Modifier. iSoft Bet's games are inspired by Japan and the ways of its noble warriors. It follows Plunderin’ Pirates and The Magic Orb.
Bonuses ・ 13 April 2022
European Gaming

iSoftBet has added to its Hold & Win range of slots with its latest title, The Magic Orb. The game plays on a 7-reel, 7 row panel surrounded by a pastel haze of colors and rock formations. At the center of the reels sits a magical Orb that can fire on any spin.
Mobile ・ 17 March 2022

Yggdrasil and Bang Bang Games have released a new online slot sequel to Super Cash Drop. The game has a Gigablox kick and a win potential of up to 7,024x.
New Year ・ 17 February 2022
Big Spin Casino

Thai Emerald is a 3×5 reel, 25-payline video slot that is packed with bonus features. Features include Wilds, Mystery Stacks and Free Spins. Thai Emerald will launch at Springbok Casino on 16 February. It can be played via download, instant play and mobile. The game has the potential to become a firm player favourite. Spring bok casino manager, Daniel Van Wyke, looks forward to seeing players return from their travels with plenty of riches. He hopes the game will be a success. The games are available in download and instant.
Travel ・ 20 January 2022
Casino City Times

Booongo and Kendoo prowl for riches in Black Wolf

Booongo and Kendoo have released Black Wolf, a new slot game. The game is set in the American prairies and combines a free spins and respins round. It follows Pearl Diver and Book of Wizard.   The Boost feature is a cash-generating feature. There are three jackpots available. If every spot is filled, the Grand Jackpot of 1,000x is awarded. A spokesperson for Booongo said they are excited to see how operators react to the game and its partners.
Winnings ・ 10 December 2021
European Gaming

iSoftBet has launched Scrooge Megaways™, a Christmas slot based on A Christmas Carol. Scrooged Megaway's is the latest addition to iSoft Bet's Twisted Tales collection. It offers up to 117,649 ways to win and comes with two randomly triggered in-game modifiers. The Hauntings of Christmas feature sees extra scatter symbols added to the reels. If five or more Scatter symbols land on a single spin, the Scrounger Respins bonus round is triggered.
Christmas ・ 30 November 2021
World Casino News

iSoftBet has released Brides of Dracula Hold & Win, a new game in its Twisted Tale series. The game has a medium to high volatility, 25 paylines game with a 95.50 percent RTP and 6,040x max win. It is playable on any device including desktop, tablet and mobile.
Mobile ・ 10 October 2021

Booongo has expanded its Hold and Win range with the release of Tiger Jungle. The game features a new Collection symbol that significantly increases the win potential. If all 15 reel spots are filled, a Grand Jackpot of 5,000x is awarded. Yuriy Muratov, Head of Account Management and Business Development at Booongon is delighted to launch this game across their network of operator partners.
Bonuses ・ 23 September 2021
European Gaming

Booongo has expanded its Hold and Win range with the release of Tiger Jungle. The 3×5, 25 payline slot is packed with features, with a Tiger acting as a Wild in base play and ancient temples as Scatters. A new Collection symbol significantly increases the win potential. If all 15 reel spots are filled, a Grand Jackpot of 5,000x is awarded.
Bonuses ・ 23 September 2021
European Gaming

Booongo has introduced a new classic-themed casino game to its Hold and Win portfolio with the release of 3 Coins. The 3x3 slot features five paylines and combines the proven slot machine-inspired format with Hold & Win mechanics to create a gameplay that aims to appeal to a wide audience. Glistening diamond symbols may randomly appear during the bonus feature and offer massive wins of up to 500x total bet.
Games ・ 28 January 2021