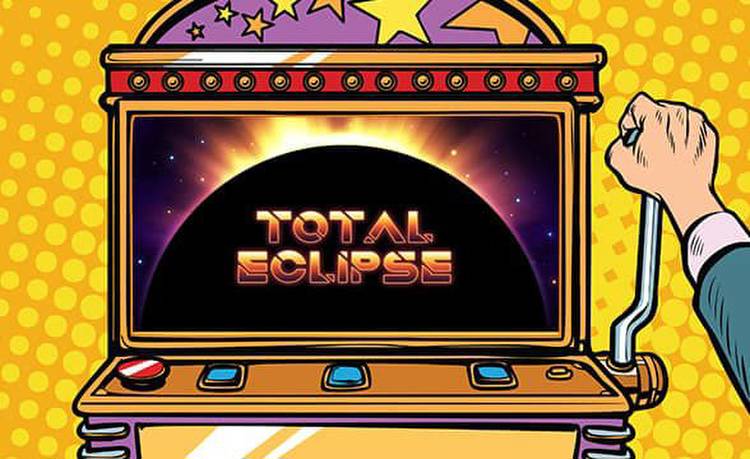 Slot developer with a strong focus on the German iGaming market Apparat Gaming has launched Total Eclipse, a fresh slot game that combines classic fruit machine and modern-day video slot vibes. The game comes with a series of captivating features, including the Hold-and-Respin bonus or the Eclipse Free Games features.

Enjoy the Rare Eclipse of Wins in the New Slot

Apparat Gaming’s freshest release introduces players to a classic 5 x 3 grid with 10 paylines that guarantee simple and unassuming action on the reels. Nonetheless, while the game might resemble a classic fruit slot machine, players will actually get to experience a few surprises. Among them, the wild symbol represented by a Star can replace the rest of the symbols and beef up the game’s overall winning potential.

The game’s action carries players to outer space, where they will come across a series of standard game symbols including lemons, oranges, BARs, horseshoes, and lucky 7s. The Eclipse symbols, however, add an extra thrill to the gameplay, especially when a minimum of five such symbols land on the reels during the base game. This is when the Eclipse Free Games round is initiated. Each of the symbols has a certain prize value attached to them.

The symbols will keep landing during the special feature. At the end of the round, the respective symbol values will be mixed and added to the win. Plus, during the same Eclipse Free Games feature, instead of the regular 5×3 grid, players will notice that every position on the grid will turn into an individual reel. Players will get to initiate the round with three respins. The counter will be reset to three every time an additional Eclipse symbol will land and be held in place.

Apparat Gaming’s co-founder and director Alina Dandörfer announced that the company is looking forward to seeing players from more than a dozen regulated iGaming markets enjoy the rare eclipse phenomenon on their engaging reels. The game has been given the green light for launch in Germany, the UK, the Netherlands, Denmark, Bulgaria, Malta, Romania, Sweden, Spain, Isle of Man, Portugal, Switzerland, and Greece.

Germany-based Apparat Gaming is deeply rooted in the online and offline iGaming market here where it continues to develop state-of-the-art games “with a German flavor” that constantly meet and exceed players’ expectations. The developer’s products also cater to the needs of the global audience with unique slots that embody German stability and quality. At the end of February, lawmakers from Germany’s largest state North Rhine-Westphalia approved online gambling legislation and gave the green light to a maximum of five licenses.

Apparat Gaming will integrate its suite of slots into Hub88's collection of iGaming titles.
Finance ・ 27 days

Hub88 has added Apparat Gaming's first four releases to its collection of iGaming titles. The deal came to fruition off the back of Hub88's parent group, Yolo Investments, acquiring a stake in Appararat.
Slot Name ・ 27 days

Peter & Sons and Yggdrasil have partnered up for a dystopian adventure where rusting wrecks border the reels in latest launch Wild One. Tom Horn Gaming, an igaming software provider, heats things up this summer with the roll out of Hawaiian Fever. R. Franco Digital has cast a spell with Witches South, a new online slot that adds voodoo spells to a world of adventure and enchantment.
Industry ・ 11 July 2022

7s Deluxe Wild Fortune Play is a new edition of the popular slot game. It has a fourth reel on the grid, cool game mechanics like Fortune play and Super Ways and 81 ways to win.
Payment Methods ・ 08 July 2022

Peter & Sons and Yggdrasil have partnered up for a dystopian adventure where rusting wrecks border the reels in latest launch Wild One. Tom Horn Gaming, an igaming software provider, heats things up this summer with the roll out of Hawaiian Fever. R. Franco Digital has cast a spell with Witches South, a new online slot that adds voodoo spells to a world of adventure and enchantment.
Industry ・ 08 July 2022

Peter & Sons and Yggdrasil have partnered up for a dystopian adventure where rusting wrecks border the reels in latest launch Wild One. Tom Horn Gaming, an igaming software solutions provider, heats things up this summer with the roll out of Hawaiian Fever. R. Franco Digital has cast a spell with release of Witches South, a new online slot that adds voodoo spells to a world of adventure and enchantment.
Bonuses ・ 08 July 2022

40 Sevens is a new slot from Apparat Gaming, creator of games ‘with a German accent’. It was launched on July 1. The game has a jazz-funk soundtrack and a bonus feature with the golden star scatter that offers 10, 15 or even 50 free spins. 40 Seven's has been certified for launch in core regulated markets, including the UK, Denmark, the Netherlands, Greece, Bulgaria, Isle and Man, Malta, Portugal, Romania, Spain, Sweden and Switzerland.
Bonuses ・ 05 July 2022

Apparat Gaming launches Total Eclipse. Developer’s latest title lets players enjoy a rare phenomenon in a classic slot. It also includes a powerful Hold-and-Repsin feature. The game is available in core regulated markets including the UK, Denmark, the Netherlands, Greece, Bulgaria, Isle and Man, Malta, Portugal, Romania, Spain, Sweden, Switzerland and of course Germany. Alina Dandörfer, Co-founder and Director at Apparat gaming said: “Seeing a total eclipse is a very rare and incredible phenomenon. With our latest game players can enjoy the same thrill and excitement whenever they like.
Bonuses ・ 09 June 2022