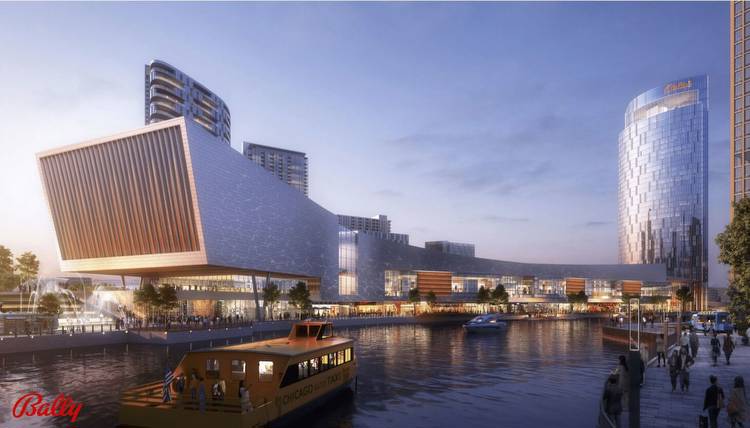 Mayor Lori Lightfoot’s race to secure $40 million in upfront payments from Bally’s to keep police and fire pensions solvent and stave off a pre-election property tax increase cleared a key hurdle Monday with committee approval of a long-sought Chicago casino.

Thanks to the lobbying muscle of organized labor, a special City Council committee stacked with the mayor’s hand-picked committee chairs approved an ordinance authorizing Bally’s to build a $1.7 billion permanent casino at Chicago and Halsted in River West, a temporary casino at Medinah Temple in River North and a host agreement with Bally’s.

That host agreement covers the labor deal and other financial, contracting and hiring commitments the company has made.

Monday’s 27-3 committee vote sets the stage for final City Council approval on Wednesday. The City Council met earlier Monday, recessed, then reconvened after the casino committee vote. The full council then voted to “defer and publish” the host agreement and final ordinance until Wednesday.

The frenzied and “unprecedented” schedule prompted downtown Ald. Brendan Reilly (42nd) to tweet a GIF of a woman in a bikini doing summersaults on a beach and landing face-first in the sand. Reilly said the rushed process is similar to what happened when the city struck a much-criticized deal to privatize its parking meters.

“I’m not saying this is the parking meter deal. I’m not even saying it’s the same kind of transaction. I’m saying ... this sprint to the finish and the gymnastics that we’re doing today” is similar, Reilly said.

“In speaking with [Ald. Edward] Burke, who’s been here for 50 years — he’s never seen anything like this. So in a way, this is actually worse than the process for the parking meter deal.”

Reilly and neighboring Ald. Brian Hopkins (2nd) failed to convince their colleagues to reject Bally’s bid. They had argued it will create an impossible bottleneck in an already congested area, and also that Bally’s has never built a casino from the ground up. Further, they pointed out, Lightfoot went around the City Council committee she created to give herself “political cover” for a decision she had already made.

When it came to a vote in the committee, Reilly, Hopkins and Ald. Michele Smith (43rd) were the only ones voting “no.”

Reilly has further argued Lightfoot’s eleventh-hour “switcheroo” to the landmark Medinah Temple as the site for Bally’s temporary casino will make an alarming spike in River North crime infinitely worse and that the already-congested area can’t handle the influx of traffic.

He is dead-set against the idea of turning Medinah Temple into a temporary gambling den, at least through the first quarter of 2026, or exempting Medinah from the liquor moratorium on that block.

Alderpersons who backed the casino cited its economic promise for the city and said its help for the pension funds reduces the risk of a property tax increase.

During Monday’s committee hearing, Reilly accused the Lightfoot administration of putting too much weight on the $40 million upfront payment and not enough on what he portrayed as Bally’s pie-in-the-sky revenue projections.

“This casino needs to generate about $550,000 a day in taxes. For that to happen, the casino would have to win $1.4 million-a-day, all 365 days-per-year, with no accounting for snow, protests, crime, January and February in Chicago every year, etc., etc. Assuming every patron wagers $3,000 daily, which is never gonna happen, the casino will need to see 9,300 patrons every day of the year. Given the number of casino positions, that’s not likely to happen,” Reilly said.

He said the casino would have to perform “on super steroids” to generate the $550,000 a day in taxes he said is needed to meet financial projections.

Chief Financial Officer Jennie Huang Bennett insisted Bally’s needs to generate “closer to $353,000 a day” to meet the city’s projections. The rest of the money is “generated by property taxes and the improved value” of the “underutilized industrial site” of the Chicago Tribune’s printing plant.

“Having a minimum annual guarantee and requiring an operator to provide us with a guarantee of revenues despite whatever the economy may be in the future ultimately has the detriment of reducing the up-front value to us as well as the ongoing percentage that the city makes. That’s why we negotiated a percentage,” Bennett said.

Reilly asked who at the city had ordered the last-minute shift to Medinah Temple as the site for a temporary casino and why.

Samir Mayekar, deputy mayor for neighborhood and economic development, said when the Chicago Department of Transportation looked closely at the original plan to put the temporary casino at a Tribune warehouse at 700 W. Chicago Ave., there was a “significant amount of overlap” with CDOT’s plan to widen Chicago Avenue, rebuild the Halsted Street viaduct and replace the Chicago Avenue bridge.

“Based on procurement timelines, supply chain issues and other factors, having that occur at the same time that a temporary [casino] site would be open while a permanent site was conducted would pose some transit challenges in that area during the construction phase,” Mayekar said.

He called the casino a “once in a generation opportunity” to help Chicago’s economy.

Bally’s proposal won Lightfoot’s backing May 5, before the casino committee even had a chance to weigh in.

She backed Bally’s over two other proposals for several reasons cited in her administration’s review. Among them were revenue estimates slightly higher than the competing projects and a projected turnaround time that beat the other proposals.

City officials also emphasized that Bally’s has no competing casino interest in the Chicago area. The other finalists in the process, Rush Street Gaming and Hard Rock Casino, operate in Des Plaines and Gary, Indiana, respectively.

For the River West site at 777 W. Chicago Ave., Bally’s has proposed 3,400 slots, a 3,000-seat entertainment center, a hotel with up to 500 rooms, a 1,000-seat outdoor music venue and exhibition space including a Chicago sports museum.

Bally’s Chairman Soohyung Kim promised the facility’s vendors, entertainers and restaurants would showcase “authentic” Chicago, giving visitors one stop to experience the diversity of the neighborhoods.

The 30-acre site has the Chicago Tribune’s newspaper printing plant, where the Chicago Sun-Times also is produced. The plant could move, or Kim raised the possibility of it remaining on part of the property.

The Rhode Island gambling company’s deal with the mayor’s office calls for it to start taking bets at Medinah Temple, 600 N. Wabash Ave. within a year of Illinois Gaming Board approval, and to complete its massive casino-resort at Chicago Avenue and Halsted Street within three years.

Bally’s would pay the city for lost revenue if that rigid timetable is not met.

The pick has generated intense criticism from nearby residents, who fear impacts in crime, noise, congestion and property values. In response, Bally’s has pledged a $2 million annual subsidy for public safety at the temporary site in addition to $5 million in casino security.

The $2 million payment would continue when the temporary casino opens. Bu, half the money would be earmarked for community benefits designated by local Ald. Walter Burnett (27th).

Prior to the final vote, South Side Ald. David Moore (17th) demanded to know what would happen if homeless Chicagoans attempt to enter either the temporary or permanent casino.

“They may not look up to par. They may not smell up to par. But, they may not be disrupting people. And they’re just saying, ‘I want to come in here and try to hit that million,’” Moore said.

“Is there gonna be some type of written policy for how we address and handle this so we’re not getting hit with discrimination suits saying who can and cannot come in?”

Ameet Patel, senior vice-president of regional operations for Bally’s, assured Moore there would be “no policy that discriminates” against homeless patrons.

“When people enter, they have to at least abide by the norms of dress codes and behaviors that we would demand from every patron. Whether you’re homeless or not does not necessarily constitute whether you can enjoy the casino or not. They’ll be allowed as any other patron would be.”

None of the casino applicants has agreed to negotiate with unions, labor leaders say. Robert Reiter Jr., president of Chicago Federation of Labor, wants aldermen to approve any proposal until a labor agreement for operations is in place. Unite Here Local 1, the Chicago union representing hospitality workers, and its president, Karen Kent, also want a unionized labor force. Bally's has engaged with the CFL and is working toward an agreement. The three active proposals have had community hearings and each has drawn heavy criticism from neighbors. A parade of alders wants to reach a so-called "labor peace agreement" they hope will result in higher casino wages.
Mobile ・ 26 April 2022