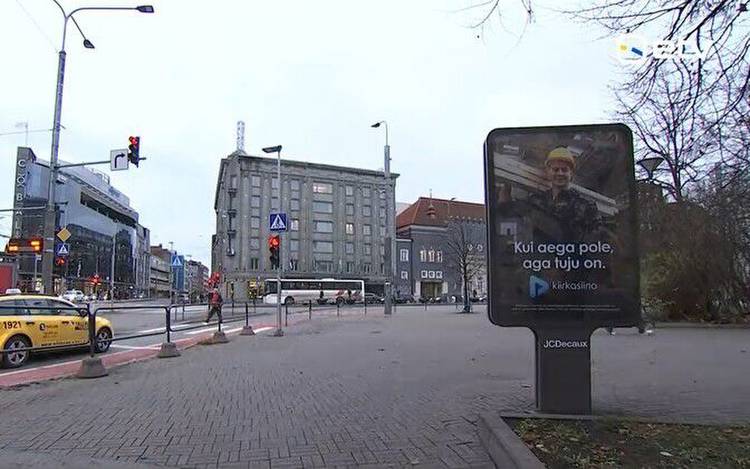 In an investigation launched following coverage last week by ERR, the Consumer Protection and Technical Regulatory Authority (TTJA) concluded that online gambling site Kiirkasiino's outdoor as well as digital ads are inviting people to gamble and thereby breaking the law. The ads in question have since been removed.

Last Monday, ERR reported that outdoor ads inviting viewers to gamble online have been up around town in Tallinn for several months already. The ads depicted men in various professions gambling on their phones in the middle of intense work environments and included the slogan, "For when you don't have the time, but are in the mood." Ads featuring similar content were published on digital channels as well.

The TTJA, which conducts oversight on advertisements, acknowledged that it hadn't received any previous complaints about Kiirkasiino's ads, but had launched an investigation into the ads in question following ERR's tip.

The TTJA said that Kiirkasiino has since removed both the outdoor and digital ads in question.

Holland Casino cannot advertise its physical locations via its online gambling business. The gambling watchdog Kansspelautoriteit (KSA) has urged the operator to discontinue the advertising. The KSA probed into the vendor’s operations back in October 2021. It found a possibility that the online business contained advertisements or links to the company's retail locations.
Industry ・ 4 days
World Casino News

Seven Network aired 49 betting promotions during its Olympics coverage last year. The broadcaster also made gambling advertisements available on its live stream of the Olympics. Nine Network also aired a gambling advertisement at 8.21pm during the half-time break of NRL grand final in 2021. Broadcasters are restricted from showing gambling advertising during their coverage of live sporting events aired between 5am and 8:30pm. The rules apply to live streams too. Acma chair Nerida O’Loughlin will write to the parliamentary inquiry into online gambling.
Sports ・ 21 October 2022
Urban Asian

ACMA has cracked down on 160 unregistered operators in the country. The regulator is also taking aim at affiliates and mobile apps. AU Online Casino, Ninja Spins, Pokies Parlor, AusCasino, and Pokie's Online are among the brands banned.
Mobile ・ 18 October 2022
Super Slots Casino

$12.83 Million Worth of Bitcoins Frozen by ED in E-nuggets Gambling Case

The Enforcement Department has issued a 12.8 billion dollar lawsuit under the provisions of the Prevention of Money Laundering Act. 30 million rupee worth of bitcoin has been frozen. Aamir Khan, son of Nesar Ahmed Khan launched the mobile game application E-Nuggets. ED says it was developed to defraud the public.
Law ・ 05 October 2022
ANI

The Ministry of Information and Broadcasting has issued an advisory on illegal online gambling sites. The All India Gaming Federation has been highlighting this menace since 2018. AIGF has more than 70 online gaming companies across esports, fantasy gaming, card games, casual gaming and other formats as members with a combined user base of over 400 million users. Roland Landers, CEO, Aigf hopes TV networks, OTTs and digital news publishers will take the advisory seriously. He hopes they will not support these anti-national websites and give them prime-time airspace.
Sports ・ 05 October 2022
Cardschat

The government reorganization has caused uncertainty for UK gambling reform. Liz Truss was appointed as Prime Minister on Monday. Michelle Donelan, a supporter of gambling reforms, will be brought into the government.
Law ・ 08 September 2022

KSA Tipped about Autoplay Feature in Dutch Online Casino. The Netherlands legalized gambling half a year ago. Since then, the country has been enacting slight changes to its laws.
Law ・ 14 April 2022
Programming Insider

Technology has greatly influenced the rise of digital hobbies. Some of these hobbies have become professions. Online sports betting and gambling are popular online hobbies, and you can take them up with depositing a cryptocurrency instead of real cash.
Sports ・ 31 March 2022
The Times Hub

A survey commissioned by the National Gaming Authority shows that 34.8% of young French players aged 15 to 17 are problem gamblers. This represents more than one in ten young people aged between 15 and 17. The problem players have health problems, financial difficulties and stress. They are influenced by social media and sports betting sites. i in France, gambling is forbidden to minors but accessible. It is also illegal in some places. In France it is possible to buy it in tobacconists and on the internet. There are also some social networking sites that promote gambling.
Gaming Authorities ・ 17 February 2022
Golden Casino News

Kansspelautoriteit has taken action against 15 gambling advertising affiliates for violating the terms of the KOA Gambling Act. The Dutch Gabbling Authority has conducted 22 investigations into the websites. 13 of them have been fined or will be fined in the near future, while two are still under investigation. Some of these affiliates immediately switched to advertising for licensed legal gambling firms. NOGA has criticised the rules regarding online gambling. They argue that the regulations give an unfair advantage to land-based companies.
Affiliate ・ 03 December 2021
Vegas Slots Online

Gambling is everywhere in Australia. It's part of the national identity. There are gambling ads everywhere. It has become part to what it means to be an Australian. The ads normalise gambling. They are everywhere you look. In sport, there is a blackout. But there are still gambling advertisements.
Sports ・ 02 November 2021
Gambling News

Foxtel was found guilty of breaching gambling advertising rules. The company self-reported the breach. Foxtels provided training to its staff to refresh them about their obligations under the advertising code and introduced new controls to prevent gambling advertisements from being broadcast during live sporting events. ACMA ruled against a complaint filed by the media operator regarding an incident in April 2021. It aired a betting commercial during a half-time discussion of a fixture from the Australian Football League (AFL).
Law ・ 14 September 2021
World Casino News

Unibet, trading as Betchoice Corporation Pty Ltd, was recently convicted in New South Wales of posting gambling advertisements that were illegal in nature. The company was fined $48,000 for its actions.
Law ・ 23 July 2021

Gambling is a big part of British culture. There is an increase in gambling addictions since the advent of online casinos. 1.4 million Brits are currently suffering from problem gambling. 9.2% of people who play online casino games become addicted. Experts wonder if gambling advertising regulations have slipped behind the technology.
Law ・ 01 July 2021
iGaming Business

GiG will relaunch Dutch language versions of TopCasinoBonus.com and CasinoTopsOnline. com in October 2021. The country's online market is scheduled to open at the start of October. GiG said both sites will offer reviews, bonuses and online games. The Netherlands’ Gaming Authority is starting a new round of action against affiliates. It is alert to illegal operators and advertisers who want to make a quick move.
Affiliate ・ 21 June 2021