Trump Plaza Hotel And Casino To Be Impoded Wednesday At 9 A.M. 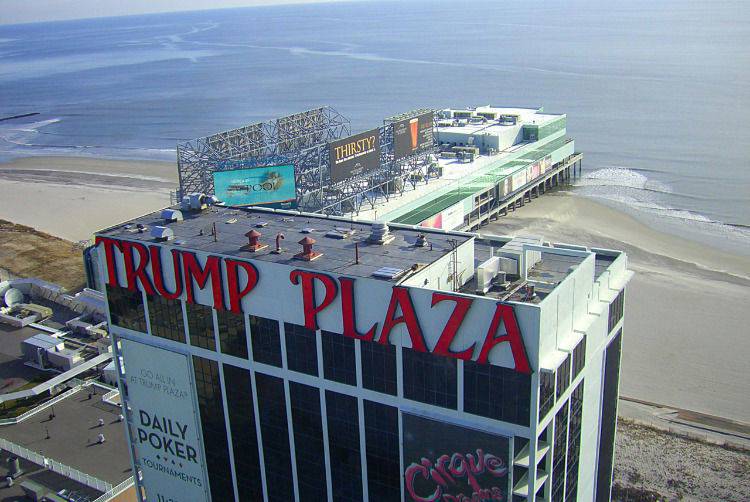 Trump Plaza Hotel and Casino in Atlantic City will be destroyed Wednesday at 9 a.m. The hotel was once owned by Donald Trump. It will meet its inglorious end after a series of events. The mayor of Atlantic city disparaged Trump, which led to a charitable auction that would have had the winner literally press the button to blow up the casino. Billionaire developer Carl Icahn's lawyers sent a cease-and-desist letter to the auction house, and Ichan himself donated $175,000 to Atlantic County Boys & Girls Club. Bette Midler tweeted that she was going to pay for the viewing rights of the implosion.

Trump Plaza Hotel and Casino will be demolished Wednesday at 9 a.m. All the money raised from the auction will go to the Boys & Girls Club. The building was declared a public safety hazard in 2020. It was originally scheduled to be destroyed on January 29, but the deadline was extended. The auction house owner is confident the bidding will rise and the building will fall. He is also confident that the amount raised will reach $500,000. Icahn's lawyers sent a cease-and-desist letter to Bodnar's Auctions.

Icahn Enterprises stopped the sale of Trump Plaza Hotel and Casino. The sale was cancelled. Icahn donated $175,000 and a second auction was held to have front-row seats to Wednesday's implosion. That raised $16,00. Trump's hotel and casino was one of three Trump-owned casinos in Atlantic City. It was the site of numerous pro boxing championship matches.

Hard Rock Hotel & Casino made donations to four local charities on Tuesday. The donations put the total charitable donations at $1 million in four years. Hard Rock International is owned by the Seminole Tribe of Florida. It bought the building in March 2017 from billionaire investor Carl Icahn. It is the former Trump Taj Mahal casino. it closed in October 2016.
Jobs ・ 29 June 2022

The boardwalk was built in 1870 along the Atlantic Ocean to keep sand out of the lobbies. The boardwalks were removed at the end of high season. By the beginning of 21st century, online casinos started appearing. iGamingNJ team considered how the casinos impacted the boardwalls architecture.
Lottery ・ 26 May 2022

Boys & Girls Clubs of Lincoln/Lancaster County will host its annual Casino Night fundraiser on April 22. The event will celebrate the organization's 15th anniversary in Lincoln. Tickets cost $75 and include dinner and $2,000 in play chips. There will be live entertainment, casino games, raffle drawings and celebrity dealers. All the money raised will go to Boys & Boys Clubs to continue offering resources and high-impact programs to youth and their families. It will also help Lincoln Public Schools students and the community.
Finance ・ 16 April 2022

Lucky Snake at Showboat is billed as the largest arcade in New Jersey at 100,000 square feet. Showboats casino was closed in 2014. The arcade games promised include crane game, basketball games, pinball, and skee ball. Miniature golf also will be offered. There will also be prizes. The rewards program is planned to be comparable to those found at casinos.
Movies ・ 27 April 2021

Ocean Casino Resort will reinvest $15 million into the property, employees and the surrounding North Beach area. The casino reported increased operating profits last year during the coronavirus pandemic. The owner, Luxor Capital Group, will donate $50,000 to local charities.
Travel ・ 19 May 2021

Would New President Change Online Casino Laws In The USA

Would New President Change Online Casino Laws In The USA? Gambling has been showing significant growth over both brick and mortar and online casinos. The Indian Gaming Regulatory Act of 1988 had changed the ability to control gambling to that extent.
Poker ・ 07 May 2021

Trump’s First Atlantic City Casino Is Imploded, And Spectators Marvel At The Symbolism

Trump Plaza Hotel and Casino in Atlantic City was demolished Wednesday. It was the last Trump-owned building left in the resort town. The demolition follows the demise of Trump's casinos. The event attracted people from all over the world. They came to see the implosion. One of them called Trump a "carbuncle on humanity". It drew national attention for its events and provided good-paying jobs for the region's workforce. A former worker brought his name tag to the event. April Knighton won $50 on a slot machine at her 21st birthday party at Trump Plaza.
Land-based ・ 17 July 2021

Trump Plaza Hotel and Casino was demolished Wednesday. The city hosted a viewing party of the implosion. Trump Plaza was the last Atlantic City casino to bear the former president's name. It was closed since 2014. Mr. Donald Trump sold the property in 2013. His other Atlantic State casinos also fell on hard times.
Land-based ・ 07 May 2021

Trump's Trump Plaza casino was scheduled to be demolished in Atlantic City this week. The former president's casino shut down in 2014 amid a wave of bankruptcies and financial hardships for establishments along the city's iconic boardwalk. Trump's Plaza was a 32-story casino built in 1984, costing an estimated $210 million. It was over $500 million in debt by the early 1990s and entered Chapter 11 bankruptcy. Mayor Marty Small warned that the demolition could be dangerous for Covid-19 infections. Local hotels with views of the casino are offering late-stay packages for visitors interested in observing the fall of Trump’s tower.
Covid ・ 17 February 2021

Bidding To Blow Up Trump Plaza Hotel And Casino Balloons To $175,000

Bidding to blow up Trump Plaza Hotel and Casino has ballooned to $175,000. The auction goes live at 1 p.m. on Tuesday, January 19. Joe Bodnar, of Bod narb's auction of Edison, believes the bidding will get crazy from here on out.
Land-based ・ 19 January 2021

Implosion of former Trump casino pushed back a few weeks

The demolition of Trump Plaza casino in Atlantic City is being pushed back a few weeks. The city is using the demolition as an opportunity to raise funds for the Boys and Girls Club of Atlantic city. Trump's former casino is currently owned by billionaire investor Carl Icahn.
Land-based ・ 19 January 2021

The highest bidder can demolish Trump's old Trump Plaza casino in Atlantic City. The demolition is scheduled for January 29. All proceeds from the auction will go to Boys & Girls Club of Atlantic city. The winning bid should top $1 million.
19 January 2021

Atlantic City to auction chance to blow up a Trump casino

The demolition of the former Trump Plaza casino will be held to benefit the Boys & Girls Club of Atlantic City. The casino was closed in 2014 and the demolition work began earlier this year.
Land-based ・ 19 January 2021