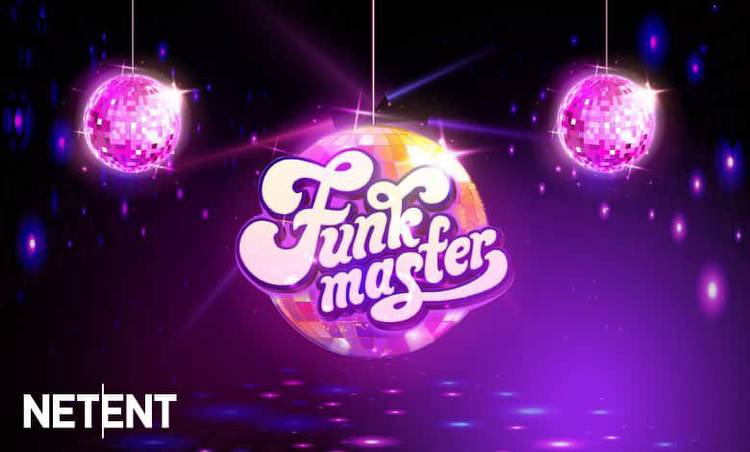 NetEnt, a part of Evolution AB, has launched a ’70s disco-themed slot game with an 8×8 playing grid. The machine contains disco graphics with shiny disco balls appearing on a player’s screen.

Attractive enough to get the players groove on the floor, Funk Master takes the community back to the dancing life of the 1970s with the added benefit of distributing rewards when the symbols fall on a winning space. The mechanism of Avalanche backs the functionality.

Dancing Wilds is getting the major spotlight from the players for all the right reasons. A moment when they fall on the winning cluster is when the bell rings for the player, signaling a huge win with much more still in line.

That symbol does not disappear; instead, it goes over to the empty position on the reels. The Avalanche mechanism is triggered to substitute Dancing Wils, and Multipliers remain unaffected by the activity of the mechanism.

The Head of Business Development at Evolution, James Jones, called Funk Master a fantastic game. The team worked hard to ensure that players go through the best foot-tapping experience while engaging with the content.

James Jones also stated that Funk Master had brought back the disco fever of the 1970s, where players are sure to fall in love with Dancing Wilds, the graphic symbols, and more functions of the slot game.

NetEnt is a premium provider of content to online casinos; and it was established in 1996 and has now gone on to become a pioneer in the industry. A reputed brand, as known in the market, thrives on offering flexible solutions to digital casinos.

The provider is backed by cutting-edge technology and innovation at the core of its principal values. NetEnt holds a valid license in Belgium, Malta, Spain, the United Kingdom, Romania, Gibraltar, Alderney, and in the U.S states of New Jersey, West Virginia, Michigan, & Pennsylvania.

The portfolio of NetEnt includes at least 200 spinning games, and it is handled by more than 200 clients across the world. NetEnt believes in challenging itself to surpass the past deliveries, making its way to the top of the list of content providers.

The launch of Funk Master follows the launch of Knight Rider, a video slot game that was launched on February 24, 2022. Knight Rider is based on the timeline of the 1980s, where players experience the crime-fighting duo.

Developed in collaboration with Universal Games & Digital Platforms, Knight Rider stars David Hasselhoff as Michael Knight, who fights crime to bring justice to the victim. High energy flows throughout the game, where players immerse with a gaming feature of 5 reels and four rows.

#CasinoEuro No Deposit Bonus Codes + Casino Euro Review #Betsson Malta is responsible for the operation of the Casino Euro, and #NetEnt serves as the provider for these fantastic games.

NetEnt's content launches with Holland Casino in Netherlands. NetEnt will provide Holland with its full portfolio of titles. The content includes content from Red Tiger, another brand owned by Evolution Group. Evolution bought Red Tigers in 2019. Evolution went ahead with a $2.2 billion acquisition of Netent in 2020. Holland casino recently confirmed it will offer employees higher salaries. It is also looking for partners of similar standing in the Dutch market. iGaming's leading supplier, Net Ent, will expand its presence in this market as it seeks to work with brands of the same standing.
Industry ・ 28 days

New slot games are usually not very popular. Booming Games' new release from Malta has been a big hit. The game is based on NetEnt's Knight Rider.
Bonuses ・ 18 July 2022

Evolution's NetEnt releases sequel to intergalactic-themed Space Wars including new features. SpaceWars 2 Powerpoints is a sequel of the original Space War game. The game has an epic interGalactic showdown, fantastic characters and thrilling graphics. It also has a range of high-tech features, symbols such as Blasters, Zappers, Bombs, Wilds and combos that rocket through the reels.
Industry ・ 02 July 2022

NetEnt launches Space Wars 2 Powerpoints today. The game is a sequel to the original Space War. It's a high volatility slot with a range of high-tech features. Power points are added to collect meter at the top of the reels. The more points collected, the more the player increases their win multiplier. James Jones, Head of Business Development at Evolution, said the game has it all.
Industry ・ 30 June 2022

Red Tiger has released a new online slot based on the 1980s Dutch comedy film Flodder. Flodders is a dysfunctional family who move to an affluent, upper-class neighbourhood. The new slot features recurring characters such as Ma Flodi, Johnnie Fludi, Daughter Kees, Grandpa Flori, and Whisky. It also features a Free Spins picker and 20 bottles to reveal prizes within. The prizes can range from Multipliers to the family Wilds. Dick Maas, director, producer and owner of the Flodger brand, is proud to be at the source of a slot game based in the first place.
Bonuses ・ 09 June 2022

NetEnt has announced a new online slot game titled Funk Master. The game features disco graphics and fun songs. It uses the avalanche mechanic and dancing wilds. The team has worked hard to bring the groove to the slot. Evolution Head of Business Development James Jones said that players will enjoy the game. He also said the team worked really hard in bringing the '70s era to this slot and players are going to thoroughly enjoy it.
Payment Methods ・ 29 May 2022

Evolution and NetEnt have launched new games. XXXtreme Lighting Roulette is a more volatile version of the company's popular Lightning Rouleurs. Netent's "Funk Master" is an 8-row, 8 reel disco-themed slot. It features a Dancing Wilds mechanic and a Free Spins mechanic. The initial size of play area can increase to 12 rows and 8 reels. It also has a disco ball mechanic with the Avalanche mechanic to create a winning combination. In the game, the symbols are shiny disco balls that fall into position through the avalanche mechanic, and the Dancing wilds substitute for all symbols except the Multiplier symbols.
Roulette ・ 29 May 2022

Evolution-owned NetEnt has expanded its portfolio with the launch of its latest slot, Funk Master. The ‘70s dance party-themed slot features disco graphics, with shiny disco balls that fall into position through the Avalanche mechanic. Dancing Wilds can form part of a winning cluster and substitute for all symbols except the Multiplier symbols.
Bonuses ・ 25 May 2022

Michael Knight and K.I.T.W. return in NetEnt's new online video slot. Evolution promised 88 new games across all its brands in 2022. Net Ent is doing its part with branded content as well as homegrown stuff. The first branded Netent title was announced at the beginning of the last weekend in February in collaboration with Digital Platforms and Universal Games – Knight Rider Video Slot.
Industry ・ 28 February 2022

The online slot developer created a fun and exciting fairy tale where the royal family is a Corgi Couple. The game has wilds and multipliers, Queen Spins, and Baby Cogli Wilds.
Payment Methods ・ 20 February 2022

Dogs Riches Megaways is a new game from Evolution. It has 6 features that will send players through a spin. The game is about a royal couple with a lot of power. The team has done a great job with the design and graphics of the game. James Jones, Head of Business Development at Evolution said that there are more chances to win but a truly royal welcome for players.
Bonuses ・ 18 February 2022

Evolution is consolidating its presence in Austria through a new partnership with the Austrian Lotteries brand, win2day. Win2Day will receive a roulette and two blackjack tables with latest Evolution technology.
Lottery ・ 21 December 2021

The first slot machine was introduced in New York in 1891. The first automatic slot with modern features was invented by Charles Augustus Fey. Slot machines with fruit symbols were introduced by 1908.
Movies ・ 04 June 2021