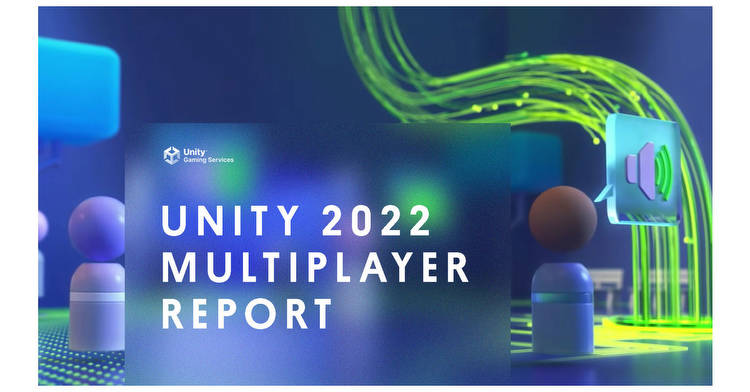 Unity released the report on the global multiplayer gaming market. It shows that 52% of the world's population now play games. A majority of those gamers (77%) play multiplayer games, and social factors influence purchase decisions and fueling engagement in games as well. Today, Unity launched new self-serve features for Game Server Hosting and Matchmaker.

Unity releases new report on the global demand for multiplayer gaming. The report highlights the social factors that drive purchasing decisions and engagement for a multiplayer game. It also highlights key player preferences. New self-serve features for Game Server Hosting and Matchmaker are released today. Netcode for GamObjects officially launches today as well. Unity is providing developers with the best service offerings. They aim to deliver stable, scalable, and customizable experiences. For more information, visit the report here. for more details. and for details on Unity’s multiplayer solutions, go to the company”s website.

Unity releases a report on the global demand for multiplayer gaming. Over half of all multiplayer gamers purchased game downloadable content in the 30 days before being surveyed.

Developer Relax Gaming has announced the launch of its new Japan-themed video slot Neko Night Dream Drop Learn all about it here:

The global gaming market is expected to grow beyond half trillion dollars by 2030. Report forecasts a compound annual growth rate for the industry exceeding 10%. The growth will be fueled by the rising popularity of mobile gaming, real money and casual genres, esports and live streaming of games. The advance of 5G networking will significantly lower issues such as gaming lag and improve user experience in cloud gaming. The issues related to mental health, addictions and obsessive gaming will act as a restraining factor for growth of the global market.
Industry ・ 02 September 2022

Augmented reality is revolutionizing the gaming industry in India. The gaming sector has expanded since the introduction of Android by Google. The goal of developers of technological solutions is to enhance the user experience. When creating a gaming app, a competent mobile game developer understands how to optimize the experience and maximize the advantages of augmented reality for games.
Industry ・ 02 September 2022

AviaGames has announced "8 Ball Strike" a new mobile game. It's a pool-inspired title that tests players' aim, aim and strategy. The game is free and available from the Apple App Store. It is not available in some states, but players in those states can enjoy free games. Avia games is focused on creating a fair community for mobile gaming. They use matchmaking AI and anti-cheating measures. Cash games are not currently available for players from some States. However, players can play free in these states.
Bingo ・ 31 August 2022

Global Gaming Awards 2022 Asia: Novomatic's Novo Unity II platform won the category “table game of the year’ in the electronic table games category. Novomatry's products are popular in Asia and have major arena installations in Cambodia and Malaysia. The Global Gaming Award is one of most prestigious awards in gaming industry. It is voted for by a panel of 30 experts. The winners were announced on August 22nd during a virtual event in Singapore. They were honoured for industry innovation and leadership achievements in a total of nine categories.
Roulette ・ 22 August 2022

How To Get The Most Out Of Your Online Gaming Experience

According to Statista, gaming is now a $135 billion industry worldwide. With the advent of the internet and online gaming communities like Twitch, social media apps such as Facebook and Discord, and virtual chat rooms like VRChat, you can play games whenever you want.
Industry ・ 11 August 2022

Why Real Money Arcade Games Like Aviator Are Gaining Popularity

Real money arcade games like Aviator are gaining popularity. The Aviation game is a new type of social multiplayer game. It is popular in the video gaming industry and in crypto casinos industry. The game involves a constantly increasing curve that can crash at any time.
Mobile ・ 26 July 2022

Why Locust isTaking Over Online Gaming

Locust Game is a play-to-earn game where you can win digital assets. It is the first NFT game based on smart contracts. The game is popular with its players. The team hopes to bring more gamers to the game. They will continue to work on the project in the coming years. Their goal is to deliver a diverse range of games with something for everyone. Locust Gamers will teach you how to actively participate in purchasing and selling NTFs through the platform. There are 3301 members of the Locus Game. This is an example of a social network.
Industry ・ 23 April 2022

The Asian Mobile Gaming Industry is Expected to Reach $86.6 Billion by 2027

The Asian Mobile Gaming Industry is Expected to Reach $86.6 billion by 2027. Report provides insights into the mobile gaming business and analysis of current limitations, challenges, and opportunities.
Mobile ・ 22 February 2022

'Game-Fi' And 'Play-To-Earn' Economic Systems Set to Transform Gaming, According to Survey With Developers

GameFi and Play-to-earn are the most prioritized features of the new blockchain technology in a survey of video game developers. The most significant potential of DeFi (decentralized finance) is at 57%, followed by governance (48%), and play- to-EARN (rewards players with tokens for gameplay). Only 2% of respondents agree that Play to Earn is interesting but needs more development. Chris Trew, CEO of Stratis, is seeing interest from game makers in the development of scalable blockchain infrastructure.
Strategy Guide ・ 15 December 2021

The transaction closed effective July 2, 2021. The Company's liquidity position is over $400 million with no debt on the balance sheet. SciPlay is a leading developer and publisher of digital games on mobile and web platforms. The company has access to a library of more than 1,500 real-world slot and table games provided by Scientific Games Corporation and its Subsidiaries. Forward-looking statements are not guarantees of timing, future results or performance. They speak only as of the date they are made. It does not have any obligation to publicly update any forward- looking statements.
Software ・ 10 July 2021

The transaction closed effective July 2, 2021. The Company's liquidity position is over $400 million with no debt on the balance sheet. SciPlay is a leading developer and publisher of digital games on mobile and web platforms. The company has access to a library of more than 1,500 real-world slot and table games provided by Scientific Games Corporation and its Subsidiaries. Forward-looking statements are not guarantees of timing, future results or performance. They speak only as of the date they are made. It does not have any obligation to publicly update any forward- looking statements.
Software ・ 08 July 2021

The rate at which game development studios have built their businesses has shocked the public. Gaming is a rewarding industry for programmers to get into. Developing online casino games is another lucrative avenue.
Games ・ 07 June 2021