This new roguelike is a slot machine, and it kinda works 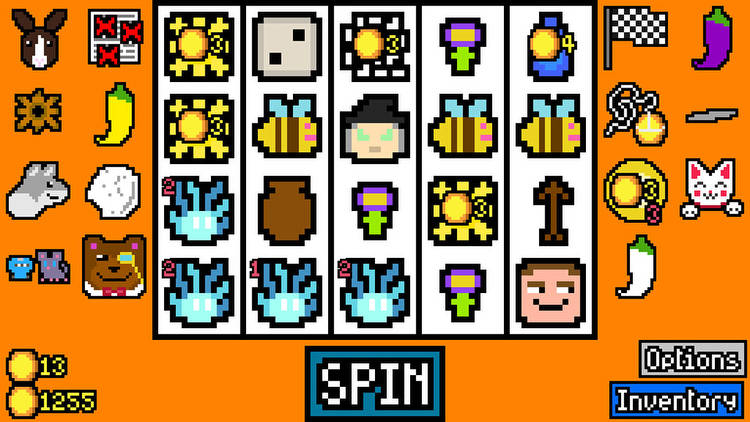 Luck Be A Landlord is a curious game!

Quick, think of a roguelikelike deck-building game! Go! You're thinking of some dungeon-crawler, right? Most of 'em are, really. So I'm quite pleased by Luck Be A Landlord, a roguelikelike deck-builder which puts familiar ideas into a simpler form: a slot machine. If you've ever felt like you lost a roguelikelike run because of bad luck with rolls, boiling the genre down a fruit machine makes perfect sense. It's in early access now, and pretty fun.

Luck Be A Landlord's premise is that your new flat has a fruity you'll use to pay rent. It starts mostly blank then after each spin you can add a new symbol from a random selection of three. After every rent payment you get to pick an item which boosts symbols or adds new rules. It starts simple, then gets trickier as rent payments increase and more complicated as synergies develop.

Here's a simple example: by itself, a Flower gives one coin. But if a Flower comes up next to a Rain symbol, it gives double. And if it's next to a Sun, it gets a 5x bonus. Plus Flowers are also doubled by Bees, who you can pick or have randomly spawned by the Bee Hive symbol, which also randomly create Honey, which gives big bucks when destroyed by a nearby Bears. You might also want to consider that Sun and Rain help Seeds too, which can grow into fruits, which give bonuses to the Chef or Mrs Fruit. And then many items boost these symbols individually, or affect how adjacency bonuses work, or respin reels, and so on.

In that roguelikelike way, luck is part of it (and a bigger part than usual here) but growing your knowledge of items and how different elements interact lets you build runs that bend random chance in your favour. Perhaps you'll simply build a deck of symbols which pay out big. Maybe you'll craft a complicated deck running a mechanism of symbols creating and destroying each other. Or perhaps you'll half-arse it to victory with a hodge-podge of ideas that are just good enough.

Look, here's a run where I started out focused on a baby gobbling sweets, leaned into symbol destruction with someone who ate fruit too, then pivoted to card suits, and ended up so distracted micromanaging an item which let me swap symbols on the reels that I forgot to make sure I could, y'know, afford rent.

It works! I enjoy it. I do feel it's a bit too random, which I realise is a ludicrious criticism to have of a fruit machine. But with so many symbols and items, too often I end up waiting for synergies which never come. And it doesn't feel very playful because when it's so easy to lose. Too often, a run is slow enough to take shape that it ends in failure just when it feels like it's starting to come together. Trying weaker or chancier builds feels a waste of time more than an opportunity to muck about.

This was improved by an update last week which added ways to remove symbols from your deck. This means you can build for short-term survival then later rework a deck, rather than face a choice between hoping for lucky rolls early or having lots of cruft later. A good change. But it still feels like too often I either win easily by rolling megabucks then happily continuining into the optional Endless mode, or I simply lose in a boring way.

Luck Be A Landlord is available for Windows, Mac, and Linux on Steam, priced at £7.19/€8.19/$9.99. The plan is to leave early access and launch properly later this year. That Steam page has a demo, so you can see for yourself.

JUST IN: Tron CEO Justin Sun says AAVE blocked his address after someone sent him 0.1 $ETH randomly from Tornado Cash.

The Mario Party series is a video game franchise featuring Mario and his friends. The first Mario party game was released in 1998 for the Nintendo 64. There have been 11 main series games released on various Nintendo consoles. Most recent MarioParty: The Top 100 was launched for Nintendo 3DS in 2017.
Top and Best ・ 20 June 2022

Gambling is a part of the Diablo franchise. In Diablo Immortal, you can gamble for a chance to obtain a powerful legendary item.
Strategy Guide ・ 05 June 2022

Vampire Survivors: Why You Should Finally Play One of 2022's Best Games

Vampire Survivors is one of 2022's best games. It was released via Steam Early Access in late December 2021. The game is visually simple and mechanically odd. It's a reminder that there are still times when great titles can rise above the noise and make a name for themselves. There are several reasons why you should finally see what all the Vampire Survivors hype is about.
Winnings ・ 18 May 2022

Secret of Geisha is a slot game based on the Japanese geisha. Makitone Gaming offers free spins, multiplier bonuses and wild symbols. It accepts US dollars, Bitcoin or USD.
Bonuses ・ 20 April 2022

Fed Up Of The Cold? These Sunny Slots Will Warm You Up In No Time!

Are you fed up with the cold winter? Then these online Slots at Paddy Power are the perfect place to warm up.
Winnings ・ 12 January 2022

Slot of the Week: Conan

How To Use Preferred Item Slots In Fortnite

How to use Preferred Item Slots in Fortnite. The new quality-of-life feature allows you to semi-automate the process of organizing your loot.
Incidents ・ 01 December 2021

Three video slots that changed the industry in 2021

There is a huge growth in the online video slot sector. Video slots have moved on from the classic three reelers found in Vegas casinos in 1980s to more sophisticated in themes, gameplay and artwork. Three ground-breaking slot games from 2021 are proving hugely successful. They are all produced by studios at the peak of their powers.
Industry ・ 23 November 2021

Playson and Blueprint have both released new Megaways slots titles

Red Rake Gaming took NetEnt's Gonzo's Quest and added BTG's Megaways to create a new version of it. Blueprint Gaming has over 30 releases under the license so far. Reel Time Gaming's most recent creation is Thai Flower. The company has been in the business for over 20 years and has created over 100 titles for their own cabinets and others’ on casino floors as well as online.
Gaming Authorities ・ 08 November 2021

Blueprint Gaming has re-imagined a classic game in Thai Flower Megaways™. The game is enhanced by a simplified version of the Megaway mechanic and up to 15,625 ways to win. The highest paying symbols are the highest paid symbols, which include a smiling Thai lady, temples and elephants.
Slots ・ 05 November 2021

There are many restaurants catering to vegan and vegetarian diets in Las Vegas. Flower Child is a favorite of locals who eat vegan, vegetarian or paleo. Chikyu Vegan Sushi Bar & Izakaya is an outstanding example of a Japanese-inspired vegan restaurant. POTs serves Egyptian delicacies with a Mediterranean influence. The hearty mushroom rice claypot is one of the most popular dishes. at Pots. There isn't another restaurant like it anywhere in the Las Las Vegans area. It's a completely unique restaurant and overall hidden gem.
Land-based ・ 04 November 2021

MGM Resorts is buying The Cosmopolitan of Las Vegas for $1.625 billion. The deal is smart on many levels. It keeps MGM's assets-light strategy. MGM gets its fair share of customer traffic from the baby boomer generation. Since it opened in 2010, The cosmopolitan has become a hipster haven. It's possible that MGM could persuade some of its younger customers to move up to the likes of Bellagio. Once the deal goes through, MGM will have only one property - MGM Springfield in Massachusetts. A real estate company will buy Springfield by the end of the year.
Travel ・ 04 October 2021

Golden Goddess slot machine is set in a lush valley with mountains and a glorious sunset. The game is so relaxing that you will daydream about the Gods on Mount Olympus. It's a five-reel, three-row TwinSpires Casino slot. There are 40 paylines, starting at 0.01 and rising to $5. Scatter is a blooming red rose that appears on reels 2, 3, and 4 only. If it fills all three, you enter the free spins bonus. It is possible to win prizes ranging from 11x your bet for five 10s up to 50x for the Goddess.
Strategy Guide ・ 10 September 2021

Jungle Spirit: Call of the Wild

Jungle Spirit: Call of the Wild is TwinSpires Casino’s Slot of The Week. For $10 you get 20 free spins on the action slot.
Bonuses ・ 04 September 2021

The Top 9 Activities and Attractions Near Bok Homa Casino

The Top 9 Activities and Attractions Near Bok Homa Casino are listed below. The casino offers a modest amount of gaming, but it's worth visiting the town of Laurel. There are museums, a brewing company and a local theatre.
Movies ・ 21 July 2021

What Makes Crazy Time Such a Good Slot?

There are slot machines in virtually all casinos and pubs. Anyone can play slots. The combination of accessibility and excitement has made the modern slot game more popular than ever.
Strategy Guide ・ 20 July 2021