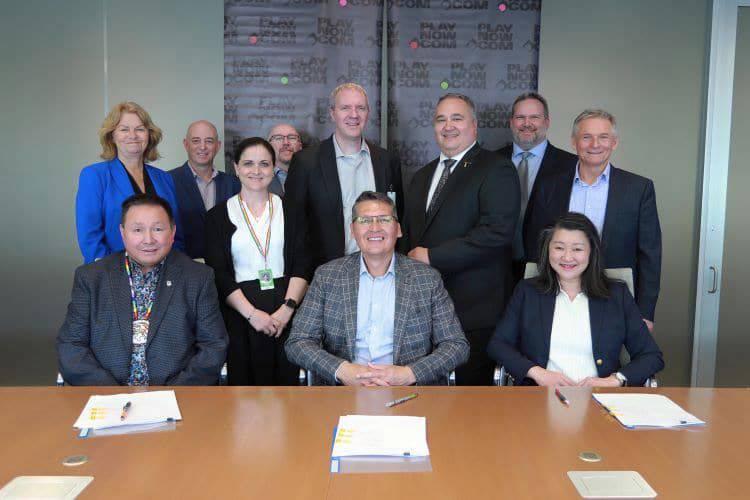 There’s good news for the residents of Saskatchewan, as the British Columbia Lottery Corporation (BCLC) has signed a vendor agreement with the Saskatchewan Indian Gaming Authority (SIGA) to develop an online gaming platform, the two parties announced Monday in a .

BCLC, a government-run corporation that already operates its regulated PlayNow online gaming platform in the provinces of British Columbia and Manitoba, will expand to a third Canadian province and offer iCasino and sports betting in Saskatchewan. Development of the site is to begin immediately with the goal of being operational by the end of 2022.

PlayNow.com, the only regulated gambling website offered in both B.C. and Manitoba, is the only gambling website in North America — and one of a few in the world — that offers dedicated player-health specialists known as GameSense Advisors.

SIGA, a nonprofit organization, operates seven First Nations-owned casinos in Saskatchewan, which is home to almost 1.2 million Canadians and borders Montana and North Dakota to the south. Established in 1995, SIGA reported revenue of $85.7 million (CAD) and net income of $16.6 million for 2020-2021, according to its annual report.

The timeline so far, and to come

SIGA closed its RFP process last December and has taken the last few months to select its vendor. Director of Communications and Media Relations Alanna Adamko Sports Handle it would take roughly four to six months to get the site up and running once a vendor had been selected. That means a fall or early-winter online gaming launch in the province is likely.

“I heard there was lots of interest [in the RFP],” Canadian Gaming Association President and CEO Paul Burns told Sports Handle. “That’s great for them. It’s a tremendous opportunity for SIGA to extend their brands online and integrate them with SaskGaming, and be able to create a really great offering for the province of Saskatchewan.”

“Sport Select has a niche in the province, and SIGA will look to complement offerings in the sports betting space to compete against the gray market betting, where these monies are leaving the province,” Adamko told Sports Handle last December.

On Sept. 23, the Saskatchewan government and the Federation of Sovereign Indigenous Nations (FSIN) announced an amendment to the Gaming Framework Agreement (GFA), which was originally signed in 1995, to establish the legal grounds for a digital gaming enterprise to be run by SIGA.

FSIN, which represents 74 First Nations in Saskatchewan, and the province established a 50/50 revenue-sharing agreement, making SIGA the only First Nations operator in Canada to have such a deal with any level of government for online gaming. SIGA will be the official operator of the new online gaming portal as per an operating agreement with SaskGaming.

For comparison’s sake, the Ontario Lottery and Gaming Corporation only allocates 1.7% of annual gross revenue to First Nations in the province of Ontario. In B.C., the government agreed to a 25-year pact in 2018 with its First Nations to share 7% of gaming revenue.

Chief Adam Pawis of the Shawanaga First Nation community, which is located roughly 170 miles north of Toronto in Ontario, commended the Saskatchewan government for making the historic deal with SIGA, but also criticized the Ontario government for cutting First Nations out of any future iGaming or sports betting plans and expansion, calling it a form of “economic genocide.”

Other First Nation groups in Ontario are also condemning the expansion of online gaming in Ontario as they believe revenue will be stripped away from land-based casinos, thus impacting the funds they rely on.

#casino workers vote to strike if no agreement on new contracts Over 1,500 casino employees from eight Great Canadian Gaming Corporation casinos have voted to strike if new deals are not reached by July 22.

A coalition of provincial lottery corporations is protesting the use of misleading advertising and illegal gambling websites in Canada. The coalition wants the federal government to work with provincial jurisdictions to protect the Canadian public from online black-market operations. There are hundreds of illegal gaming sites operating in the country. The group wants to raise public awareness regarding these issues and reach out to media platforms to advise them of their duty to comply with existing laws and regulations.
Law ・ 9 days

BCLC and Saskatchewan to Launch New Gaming Website in November

BCLC and Saskatchewan Indian Gaming Authority are planning to launch a new dedicated gaming site in November. The website will be ready for the Canadian Football League’s Grey Cup.
Gaming Authorities ・ 12 July 2022

New Online Gaming Site In Saskatchewan Plans November Launch. Residents 19 or older can place online sports wagers on the Grey Cup on November 20 at Mosaic Stadium in Regina. British Columbia Lottery Corporation (BCLC) was chosen as the winning vendor for the new online gaming site. The PlayNow platform is the only regulated gambling website offered in both B.C. and Manitoba. The province and the First Nations government established a 50/50 revenue-sharing agreement. It is only the second time a First Nation operator has an online game deal with any level of government in Canada.
Industry ・ 11 July 2022

The gambling industry in Canada: legalisation, online casinos and more

BCLC informs the public about a scratch game bug. The problem affects the new CA$3 Road to Riches Scratch & Win products. The state-run agency oversees and manages all regulated lottery and gambling activities for the Province of B.C.
Scratch Games ・ 09 June 2022

Director Warns Of 'Tsunami Of Gambling Advertising' Coming To Canada

Ontario will launch its regulated market for sports betting on April 4. Keith Whyte, the executive director at the National Council on Problem Gambling, is concerned about the impact on bettors and their families. He warned of the barrage of gambling advertising that is already happening in the U.S. and Canada. According to Canadian media analyst Adam Seaborn, over 28 different gambling advertisers appeared on TV in Canada last year spending upward of $100 million (CAD). A recent study by Deloitte Canada revealed most Canadians are still uninformed about sports gambling.
Lottery ・ 15 March 2022

Canada: BCLC iGaming revenue to be hit by illegal gambling, operators in other jurisdictions

The British Columbia Lottery Corporation expects enhanced opportunities from the legalization of single-event sports gambling last year. However, illegal gambling sites operating in British Colombia and across Canada are increasing their investments in sponsorships and advertising. Ontario’s new iGaming market is set to launch on April 4. The BLCL reported CAD $430 million ($338.1 million) net income in 2020-21. It hopes to improve the figure to CAD. $1.2 billion ($943 million), this year and CAD$1 billion (CAD $ 1.4 billion) by the next.
Finance ・ 02 March 2022

The Lotto Max jackpot remains intact at CA$37 million. No ticket from Canada's ten provinces and three territories has managed to match the winning numbers. There are two draws for the game every week: one on Tuesday and one Friday.
Winnings ・ 03 January 2022

Evolution and Ontario Lottery and Gaming Corporation launch online Live Casino on OLG.ca. Evolution is providing the provincial lottery and gaming agency with Live Casinos services from its production studio in Vancouver. The live dealer games are unique in the fact that players interact directly with real casino dealers via internet video feed. Ontario is the fourth Canadian province to partner with Evolution. It joins BCLC, Alberta Gaming, Liquor and Cannabis, and Loto-Québec in streaming live games to their respective players from Evolution's Vancouver studio.
Lottery ・ 09 November 2021

Saskatchewan Indian Gaming Authority will be able to launch a new website offering sports betting and online casino games for Canadians. Revenue from the site will split 50/50 between FSIN and the province.
Gambling Sites ・ 04 October 2021

The FSIN and province will split revenue from the online gambling site 50/50. The site is expected to launch at some point in 2022. It will include both online casino and sports betting.
Gaming Authorities ・ 24 September 2021

The government of Saskatchewan and the Federation of Sovereign Indigenous Nations are going to launch a new and regulated online gaming platform for the province. The platform will be operated by the Saskatchewan Indian Gaming Authority, which will take 50% of the revenue, with the other 50%.
Industry ・ 24 September 2021

Some markets are embracing online casinos, while others are strictly against it. Canada is seen as the one with potential, but the legal aspect of it is still confusing.
Gaming Authorities ・ 07 May 2021

Online gambling is legal in Canada, but operating a casino without a license is illegal. The regulations regarding gambling in the country are confusing and complicated.
Law ・ 19 January 2021