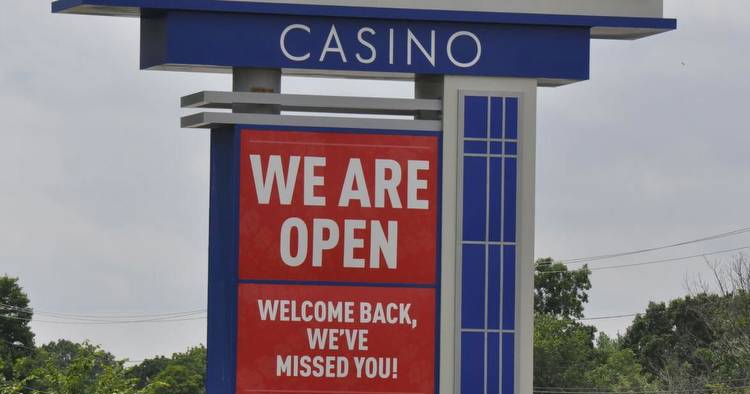 PLAINVILLE — After months of ups and downs, revenue at Plainridge Park Casino has leveled off, the state Gaming Commission reported Monday.

The casino, the state’s lone slots-only parlor, had gross gaming revenue of $12.9 million in April, just under $30,000 less than the month before. And that’s up from $12.5 million in revenue for April of 2021, as the state’s gaming industry was recovering from a more than three-month pandemic lockdown in the middle of the prior year.

Gross gaming revenue is the difference between what gamblers bet and what they take home. It’s comparable to profit in other businesses.

Statewide, revenues for all three Massachusetts gambling venues showed little change in April from revenues in March. The other two casinos, Encore Boston Harbor in Everett and MGM Springfield, offer live table games such as poker and blackjack while Plainridge does not.

Penn National, the Pennsylvania company that runs Plainridge, does not comment on the month-to-month revenue reports.

MGM Springfield took in $22.5 million in slot machine and table game revenue in April, down slightly from March but still enough to rank as its fifth best month since opening in 2018.

Altogether, the state’s three casinos took in approximately $99 million in gross gaming revenue in April, according to the gaming commission.

To date, the commonwealth has collected approximately $1.146 billion in total taxes and assessments from Plainridge, MGM and Encore since the respective openings of each gaming site.

- #Massachusetts casinos report revenue of $93m for June The Massachusetts Gaming Commission has reported $93m in revenue for the state’s three casinos.

Plainville casino's revenues rebound in February. January was the worst month since the slots casino reopened last spring. February's numbers beat January's results. All three Massachusetts casinos' revenues were up in the month of February, up from $82 million in January to $86 million. The company that operates Plainridge does not comment on its monthly revenue reports. It's been five years since Plainville has been open as a slots parlor.
Finance ・ 16 March 2022

Plainridge Park Casino had its best December in two years. The casino had revenues of just over $11 million in gross gaming revenue for last month. It is the first increase since the July report and the best since 2019 when revenues were $10.2 million. Statewide, the three casinos generated approximately $96 million for December. The commonwealth has collected approximately $971 million from Plainridge, MGM and Encore since their openings. MGM Springfield and encore Boston Harbor are taxed 25% of GGR.
Finance ・ 20 January 2022

Encore Boston Harbor generated $32.2 million of gross revenue from slots and $30.58 million from table games in October. MGM Springfield took in $16.88 million and Plainridge Park Casino took $11.74 million. The state collected $921 million in taxes and assessments since Plainidge Park opened in June 2015. . ... In July, the state's three gambling centers collected a record $95.4 million, and a total of $27 million was collected in state taxes.
Finance ・ 16 November 2021

Plainville casino reports slight dip in revenue. The state has collected approximately $894 million in total taxes and assessments from the three gaming establishments since they opened. The legislation has been proposed on Beacon Hill to expand live table games to Plainridge. It is not known if the legislation will be passed. For the month of September, the state’s three casinos generated approximately $ 89 million.
Finance ・ 16 October 2021

In March 2021, Plainridge Park Casino, MGM Springfield and Encore Boston Harbor generated approximately $84 million in Gross Gaming Revenue. This is an increase of $16.5 million from the previous month.
Covid ・ 07 May 2021

Encore Boston Harbor, MGM Springfield and Plainridge Park Casino brought in $84 million in gross gambling revenue last month. That resulted in almost $24 million of tax revenue for the state. The casinos were shut down for a period of time last year during the pandemic.
Gaming Authorities ・ 16 May 2021