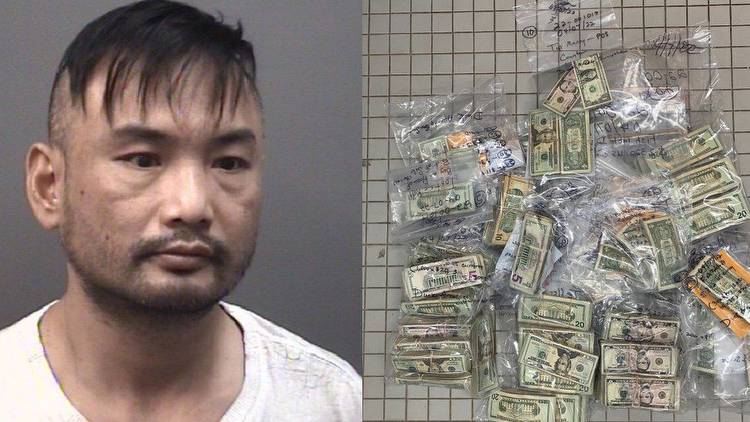 The investigation at Duck Arcade Sweepstakes located on Mooresville Road in Salisbury began in March 2021 and 41-year-old Jindeng Dong was arrested on May 31, 2022.

Dong ran Duck Arcade Sweepstakes, which was operating under the guise of a legal arcade. On March 19, 2021, June 18, 2021, March 31, 2022, and April 7, 2022, an undercover investigator played server-based video games violating state law. The games allowed patrons to receive cash equal to credits earned and to bet more than eight credits per play. These games did not involve skill or dexterity and winners and losers were each chosen randomly.

With the help of the Salisbury Police Department, a state search warrant was executed at the arcade and it was determined that the business had 95 playing stations with multiple gaming stations in violation of state law.

Dong, a resident of Salisbury was doing business under the name of Dong Business, Inc. Multiple other employees of the business were also identified, with some being natives of China and Mexico, in addition to North Carolina.

During a search warrant at Dong’s home, assorted documents, a money counting machine and $155,628 were seized.

Welcome to the slot game CAMINO DE CHILI! 🔥 On your way to discovering the land of ancient civilisations, explore Mexico, enjoy its local charm, and pick winning combinations!🌶 Try demo of the game!

“The COVID-19 pandemic continued to have significant impacts on our business, results of operations and financial condition during the reporting period,” MGM China said. READ MORE HERE

‘Fraudulent player accounts’ were used by a teenager to target online gambling in Ontario, police allege. The Ontario Lottery and Gaming Corporation contacted police in May 2021 regarding “potential illegal activity on its gaming sites” Cell phones were allegedly hacked in order to acquire new phones. A 17-year-old boy from London was arrested and charged with fraud over $5,000, three counts of fraud under $5000, five counts. of personation with intent and seven counts using forged documents.
Trust and Safety ・ 14 July 2022

Dennis Maxwell, 51, was arrested for allegedly running an illegal gambling operation at 554 West Main Street in Buford. Maxwell is the listed agent for Tannery Row Ale House, LLC. He was charged with felony commercial gambling and misdemeanor keeping a gambling place.
Incidents ・ 18 June 2022

Jindeng Dong, 41, a Chinese national living in Salisbury, was arrested on May 31 and charged with running an illegal gambling operation. He was also charged on five other counts. The investigation into Duck Arcade Sweepstakes at 1012 Mooresville Road began on March 21, 2021. On April 7, 2022, officers from the Sheriff’s Office and Salisburys Police executed a state search warrant at DuckArcade. They found 95 playing stations, dozens of PCs and monitors, and gambling-related equipment. Also taken as evidence were two firearms and ammunition.
Incidents ・ 07 June 2022

Jindeng Dong, 41, a Chinese national living in Salisbury, was arrested on May 31 and charged with running an illegal gambling operation. Investigators also had a warrant to search Dong's home, where they seized approximately $117,000 in cash along with business documents and a money counting machine. The case involved both the Sheriff’s Office and the Salisburys Police Department. On April 7, 2022, officers from the sheriff's office and Salimburies Police executed a state search warrant at Duck Arcade. They found 95 playing stations and gambling-related equipment.
Incidents ・ 06 June 2022

David Leigh Eilers, 49, of Rocky Mount was named in a three count criminal indictment. Eiler operated Computer Time on US Highway 70 West in Clayton. Police seized 60 gaming and slot machines, two ATM’s, over $48,000 in cash and two firearms.
Law ・ 25 May 2022

A local minimart will pay $6,000 for operating illegal gambling machines

Ganesh Food Mart LLC will pay $6,000 in fines for operating illegal gambling machines. The shop is doing business as Pantry 1 FoodMart at 609 Chester Pike. Investigators visited the shop several times between December 2020 and May 2021 and found nine illegal machines and more than $7,800 in cash. They found the machines accepted bill denominations up to $100 and enabled “rapid play”
Law ・ 18 March 2022

2 men were recently arrested on racketeering and other charges in Seminole County. They are accused of running an illegal gambling operation with casino-style games out of a strip mall in Altamonte Springs. Dhanan Alexander Ganpat and Amit Rampersaud, both 34, are charged with running a business that offered online "sweepstakes" that were indistinguishable from slot machines. The investigator who wrote the affidavit for Gan Pat's arrest was also the lead agent in the investigation of Allied Veterans of the World Inc., which ran internet cafes that authorities alleged were actually gambling houses.
Law ・ 17 March 2022

Michael Miller bought a Fast Play ticket at Charlie's Mart on Faith Road in Salisbury. He won $332,830. Miller will use the money to buy a new home. Fast play games raise more than $900 million a year for education. The odds of winning a jackpot are 1 in 240,000. The tickets are printed with the amount of the jackpots and how much of that jack pot a player can win.
Winnings ・ 15 January 2022

Michael Miller of Salisbury won $332,830 Fast Play jackpot. He will use the money to help his family buy a new home. Fast play games raise more than $900 million a year for education in Rowan County. For details on how $7.4 million raised by the lottery made a difference in the county in 2020, visit www.nclottery.com. For more information on the impact of the Lottery visit the website.
Winnings ・ 23 November 2021

Rowan County deputies raided Fishzilla Arcade in Salisbury on Thursday. The business is not operating as a legal arcade and the operators have made millions and have not been paying state or federal taxes. Drug trafficking, robbery, and illegal possession of guns are being investigated at the businesses.
Incidents ・ 09 August 2021