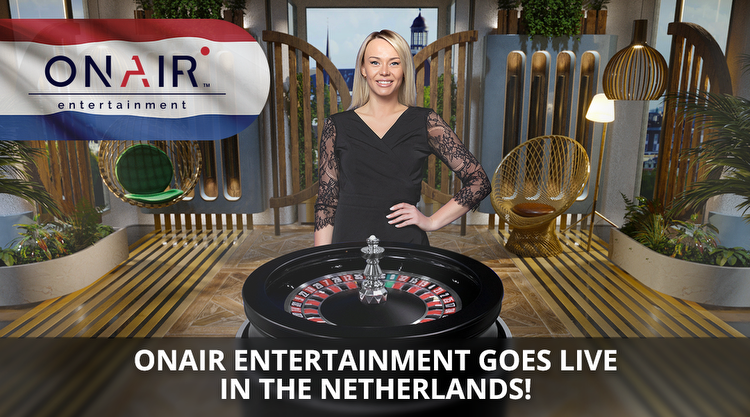 On Air Entertainment has announced that its Live Casino games have hit the ground running in the Netherlands. This has been made possible thanks to official regulatory approval by the Kannsslautoriteit (KSA), which now enables On Air to pursue new avenues of opportunities in the highly-regulated and lucrative market.

The license agreement clears On Air Entertainment for an immediate launch, and the company has come prepared. Players will be able to enjoy an authentic "Dutch-themed" environment that has been created by the company with a particular focus on an immersive gamingexperience.

Operators in the country will have access to some of On Air’s best games, including roulette, blackjack, speed roulette, and more. On Air has focused on crafting bespoke experience possible through its dedicated Live Casino studio in Riga, Latvia. This capacity will soon be boosted with the addition of new studios in Georgia and Romania.

In the meantime, On Air remains one of the most highly-accessible studios in the regulated gambling market. The company holds licenses in numerous European jurisdictions, such as Denmark, Sweden, the United Kingdom, Greece, Latvia, and Malta.

The company also has a license from the Isle of Man and has most recently driven forays across the Atlantic and is now licensed to operate in Ontario, giving it a broad reach. In the Dutch market, the company will seek to establish a dynamic variety of Live Casino games that are tailored and localized for the needs, preferences, and tastes of specific player bases.

On Air is planning to bring a number of new games in the coming months which will allow the company to continue scaling its footprint and achieve success with premier operators. "The Netherlands has quickly become [one of] the largest live dealer markets in Europe," On Air Entertainment Business Development Manager Dejan Loncar said.

It’s the market size and potential that has attracted On Air Entertainment, which is constantly seeking to expand. Thanks to this entry, the company’s products are now available in nine regulated jurisdictions in Europe and beyond. "This is our ninth market launch in just eight months and shows our commitment to becoming the number one provider of live casino content to operators targeting regulated markets across Europe and beyond," Loncar added.

Live casino is becoming very popular. Playtech and 888casino have just signed a new deal that will allow the latter to benefit from the supplier’s Live Casino and RNG games.

On Air Entertainment to go live with Georgia studio

On Air Entertainment goes live in the Netherlands

On Air Entertainment to break ground on Georgian studio.

On Air Entertainment Launches Live Casino Products in the Netherlands

On Air Entertainment has launched its portfolio of games and products on the regulated iGaming market in the Netherlands. The company is cleared for launch with a number of tier-one operators.
Live Gambling ・ 11 days

On Air Entertainment has expanded into Denmark. Denmark is an 8 regulated gaming jurisdiction.
Live Gambling ・ 22 June 2022

Swintt CCO David Mann talks about the company's recent launch in the regulated Dutch gaming market and the outlook for regulated markets in Europe and beyond this year. David walked us through Swintts' constantly-improving portfolio and what goes into crafting player-favorite titles.
Law ・ 21 June 2022

OnAir Entertainment has received the green light to start working on a new studio in Bucharest, Romania. The new Studio will feature 30 tables for roulette and blackjack games.
Live Gambling ・ 08 June 2022

OnAir Entertainment gets certified for Sweden

OnAir Entertainment has been approved for the regulated iGaming market of Sweden. The firm's products include roulette, blackjack and speed roulettons.
Games ・ 02 June 2022

OnAir Entertainment has entered its seventh regulated market in as many months. It has received the necessary approvals to launch its games to operators in Sweden. OnAir's games include blackjack, roulette, speed rouchelette and auto roulettes. The network is now available in several key regulated markets including the Isle of Man, the UK, Greece, Ontario, Latvia and Malta. This is set to increase to nine markets very soon with launches in Denmark and the Netherlands. Dejan Loncar, Commercial Partner at On air Entertainment, said it's a milestone moment for the company.
Games ・ 01 June 2022

Stakelogic Live has launched a suite of its Live network games with BetCity.nl. The partnership strengthens their positions in the Dutch market.
Live Gambling ・ 20 April 2022

Stakelogic's live dealer division and its games are now available to operators. StakeLogic Live has already established itself as a leading source of live dealers' games.
Live Gambling ・ 14 April 2022

Stakelogic has signed a content deal with Jack's Casino in the Netherlands. StakeLogic will deliver its full range of slot games to Jack’s Casino. Jacks is licensed by the Kansspelautoriteitor the Dutch Gaming Authority. The cooling-off period for new licensees in Dutch market will be officially retired on Friday, April 1. Dutch authorities have issued recommendations to gambling operators to avoid questionable bonus and advertisement practices. Online advertisement campaigns have been debated by regulator on several occasions. The regulator has issued recommendation to avoiding questionable bonuses and adverts.
Industry ・ 08 March 2022

Betixon's top performing slots have been certified for the newly regulated Dutch market. The developer has already established itself as a leading provider of mobile-first casino content. It is already live in the UK, Lithuania, Estonia, Italy, Colombia and Romania. It will be rolling out its games across their lobbies shortly. Lior Cohen, Chief Executive Officer at Betixon, believes the Netherlands is one of the most important markets in Europe. He believes it will grow at a rapid rate in coming months and years. Bet Dixon is in discussions with other operators in this market with plans to offer exclusive and branded content in due course.
Law ・ 30 November 2021

Pariplay Ltd has signed a supply agreement with Holland Casino for its proprietary games. The deal will see players at the state-owned, land-based casino operator’s new online interest, Hollandcasino.nl, gain access to a total of 20 cherry-picked slots. Pariplay has a network of at least 30 games studios prepared to go live in the Netherlands.
Gaming Authorities ・ 29 October 2021

Microgaming Debuts in the Netherlands with 200 Games

Microgaming has entered the newly regulated Dutch online gaming market. The provider will launch a diverse array of games with licensed operators in the country. Nederlandse Loterij and TOTO are the first customers. Microgaming will introduce 200 exclusive titles to the market, including a selection of releases launched this October. The company has supported its partners with documentation and information to help with preparations for the new regulations in Netherlands.
Winnings ・ 23 November 2021

Bragg's ORYX Gaming is ready for the Dutch online market opening in October. The company has received local certification for its iGaming Platform and RGS. 50 exclusive games from Gamomat, Peter & Sons and ORyX's own studios will be made available immediately. The Netherlands plays an important part of Bragg’s strategy to expand in key regulated markets.
Finance ・ 31 August 2021

Online Casino Ground has released research on the Dutch online gaming market. It shows that traditional slot games will be the most popular choice for Dutch players. Stakelogic's classic slots are the top three most played in the global market by Dutch people. Two of the three top-ranked developers in six most important slot developers are based in casinos. The rest of top positions are filled by online leaders such as NetEnt, Play ‘n Go, Microgaming and BTG.  Online Casinos Ground expects the market to change once it finds its feet. They predict that the players will eventually move to more contemporary games.
Law ・ 28 June 2021