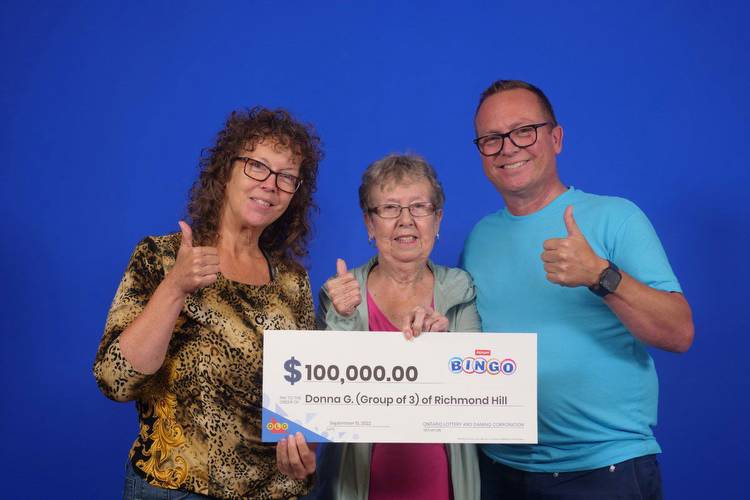 The group members are:

The mother, daughter, and son trio said they have been playing the lottery together for a decade. Sonja said she is the one who purchased the tickets for the group that day. “I played the tickets and initially I thought we won $15 – I used the OLG App to check it and $100,000 appeared! I couldn’t believe it,” shared Sonja while at the OLG Prize Centre in Toronto.

Sonja called Stephen first and told him to listen to the music as she scanned the ticket on the OLG App again.  “I was so happy to hear the joy in my mom’s voice – it makes me so happy to see my mom like this,” said Stephen.

“I was very happy, but calm when my mom told me. I wish everyone had a mom like ours – the joy and excitement in her voice was enough,” smiled Donna.

Sonja, Donna and Stephen haven’t made plans for their win yet.

OLG is booking in-person prize claim appointments at the OLG Prize Centre in Toronto. We strongly encourage those with claims between $1,000 and $49,999.90 to submit them online or mail them in. Submitting claims online is fast and secure. Customers with prizes over $50,000 are asked to call 1-800-387-0098 to discuss available prize claim options.

The winning ticket was purchased at Bibi Convenience on Yonge Street in Richmond Hill.

A group of 18 from the Greater Toronto Area won the Ontario Jackpot of nearly $2.8 million in the March 12 LOTTARIO draw.
Winnings ・ 28 days

A 72-year-old retiree from Oakville has won the LOTTO 6/49 jackpot from last month. His winnings are valued at just over $3.8 million, including a multimillion prize and a bonus worth an extra $5.
Winnings ・ 19 July 2022

Chiharu Ooka, 46, of Whitby, Ontario, won $356,465.60 in the June 11 LOTTARIO draw. She will use the money for education for herself, her husband and their children and for a family vacation. The winning ticket was purchased at Petro Canada on Dundas Street in Whitbys. Lottario launched in 1978 as Ontario’s first terminal lotto game. Tickets are $1 and the draws take place every Saturday.
Winnings ・ 06 July 2022

Mir Alam Adam Ali of Aurora won a Maxmillions prize worth $1 million in the May 31, 2022, Lotto Max draw. He bought the ticket at One Stop Dollar & More on 14th Avenue in Markham. Mir will put the money toward his children's education. Lottos in Ontario have won over $7 billion since 2009. OLG is booking in-person prize claim appointments at the OLg Prize Centre in Toronto.
Lottery ・ 27 June 2022

Herbert Ward of Kendal won a jackpot on LIGHTNING LOTTO on May 30. He will share his winnings with some special people in his life. The winning ticket was purchased at Shell on King Avenue in Newcastle. The top prize starts at $125,000 and grows with ticket sales. Odds of winning any prize are 1 in 4.47. For more information on How to Play visit OLG.ca.
Winnings ・ 24 June 2022

Irena Soja of St. Catharines won $250,000 on Instant Bingo Multiplier. She bought the winning ticket at Avondale on Carlton Street in St Catharsines. Irenas plans to invest her winnings immediately and take a trip back home to Poland to spend time with her family. OLG is booking in-person prize claim appointments at the OLg Prize Centre in Toronto.
Bingo ・ 21 June 2022

Brian Kimmons of Brechin has won $259,074.50 on Lotto Max. He bought the ticket at Hasty Market on Yonge Street in Richmond Hill. His common-law wife is excited about the win. Lottos Max players in Ontario have won over $7 billion since 2009. OLG is booking in-person prize claim appointments at the OLg Prize Centre in Toronto.
Winnings ・ 21 June 2022

Belleville resident plans to “give back” after winning $11 million

Bernard Boucher of Belleville won the top prize in the LOTTO 6/49 draw back on April 30. Bouchers bought his ticket at New Way Convenience on Dundas Street in Bellevilles. He will gather advisors and share his winnings with family and travel. LOTT 6-49 players in Ontario have won more than $13.7 billion in prizes since 1982. OLG is booking in-person prize claim appointments at the OLg Prize Centre in Toronto.
Winnings ・ 14 June 2022

Andre Harris of Barrie won a MaxMillions prize worth $1 million in the March 25, 2022, Lotto Max draw. He will invest his winnings and invite his mother from Jamaica for a visit. The winning ticket was purchased at Macewen on Dunlop Street in Barria. Lottos Max players in Ontario have won over $7 billion since 2009.
Winnings ・ 06 June 2022

Carol Bissonnette of Casselman won a $50,000 in instant bingo with Instant BINGO. She will spend the money on home improvements, a new TV and taking her grandmother to Toronto. The winning ticket was purchased at Macewen on Concession Street in Russell. The odds of winning any prize are 1 in 3.79. OLG is booking in-person prize claim appointments at the OLg Prize Centre in Toronto for customers with prizes over $49,999.90.
Bingo ・ 25 May 2022

Markham retiree wins $758K jackpot on Lightning Lotto. Karl Killingbeck has been playing the lottery for over 30 years. He plans to pay some bills, travel and share with family. The winning ticket was purchased at Newly Elson's Variety & Gift on Elson Street in Markham. OLG is booking in-person prize claim appointments at the OLg Prize Centre in Toronto. Customers with prizes over $50,000 are asked to call 1-800-387-0098 to discuss available prize claims options.
Winnings ・ 13 May 2022

Bolton man wins $100,000 playing Lotto 6/49 for the second time. He bought the ticket at Petro Canada on Highway 27 in Nobleton. The winner will share his win with family and go on vacation. OLG is booking in-person prize claim appointments at the OLg Prize Centre in Toronto.
Winnings ・ 26 April 2022

The jackpot winning ticket for the February 4, 2022 LOTTO MAX draw was sold somewhere in Toronto. It's the second time in a row that the LOTTTOMAX jackpots winning tickets were sold in Ontario. The last time the jackpupil was worth $22 million and it was from the January 18, 2018 LOTTI MAX drawing.
Winnings ・ 05 February 2022

The Lotto 6/49 jackpot and other big prizes were won across the province from the Wednesday, February 2, 2022 draw. The Lottos 6-49 winning ticket worth $5 million was sold in Mississauga. An additionally guaranteed $1 million prize was also sold.
Winnings ・ 03 February 2022

Ontario ticket holder wins Friday's $70 million Lotto Max jackpot. Two tickets for the LOTTO MAX second prize draw worth $250,582.40 were sold in Mississauga and Toronto. An ENCORE ticket worth $100,000 was sold in Toronto and two MAXMILLION tickets worth a total of $1 million were bought in Ottawa andToronto. OLG is booking in-person prize claim appointments at the OLg Prize Centre inToronto for those claims that require a face-to-face interview.
Winnings ・ 18 December 2021

One of the two winning Lotto Max tickets was sold in Toronto. The winner will take home $35 million. It was the largest prize pool in Canadian lottery history. There were 46 Maxmillions prizes up for grabs in Tuesday's draw. Twenty-one of those winners are from Ontario.
Lottery ・ 19 July 2021

$1M MaxMillions winner sold in Simcoe County. Lottery has been on a roll for 8 weeks. The current roll is $70 million.
Lottery ・ 19 June 2021

Art Walters won the top prize in the May 22 Lotto 6/49 draw. He plans to share his winnings with his children and make a donation to assist animals in need.
Winnings ・ 08 June 2021