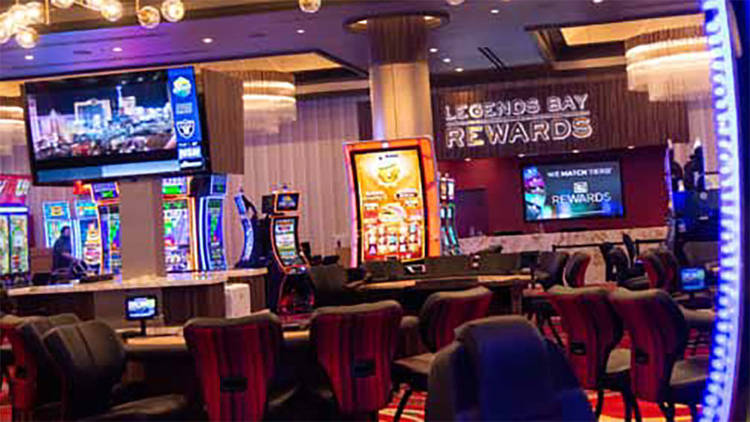 In the week before it opened, operators of the Legends Bay Casino in Sparks had to turn potential customers away because the $120 million property wasn’t open.

The construction fencing at Legends Bay has disappeared and The Outlets at Legends, an open-air shopping, dining, and entertainment destination, draws 12 million annual visitors. The main entrance to Legends Bay sits across a courtyard some 80 feet from Scheels, a popular national sporting goods chain.

Cardinal said the growing interest from mall customers is one feeder group that convinces him Legends Bay – the first all-new casino built in the Reno-Sparks area in the last 20 years – will be successful.

“I talked to a couple the other night who belong to several slot clubs in town,” said Cardinal, who also oversees Casino Fandango, Olympia’s other Northern Nevada property in Carson City. “They’re super-excited about us opening. I think we’re going to get a huge contingency of locals from Sparks and Reno because it really is the buzz of Northern Nevada.”

He also credited Olympia’s recent heavy advertising and publicity campaign for fueling interest in the 80,000-square foot casino that includes 665 slot machines, 10 table games, a sportsbook operated by Las Vegas-based Circa Sports, and five dining spots, including a steakhouse and a “food truck hall” with three different options.

The casino held its grand opening Tuesday evening, which followed a media preview on Monday.

Developers originally envisioned Legends Bay as the anchor for the complex surrounding the Sparks Marina. The recession halted the casino project, but the retail component was built. Olympia developed two 100-plus-room non-gaming hotels, Hampton Inn and Residence Inn, that opened in 2018 near the casino site.

Meanwhile, Northern Nevada has seen a population boost of 15 percent between 2010 and 2020 which has exceeded the national average of 7.4 percent. An increase in technology and manufacturing jobs has led to wage growth and home prices outpacing the U.S. average.

The timing worked in Olympia Gaming’s favor. In June, CEO Garry Goett told Nevada gaming regulators the delay left the project in a much stronger financial position with a built-in customer base that didn’t exist 15 years ago.

“Every other week, it seems, there’s a whole new apartment complex development opening,” Cardinal said. “I expect a huge local contingent will check us out.”

Also, Reno’s gaming options have dwindled in the past few years. Harrah’s Reno is now the non-gaming Reno City Center, a mixed-use development with residential units, offices and retail. The shuttered Fitzgeralds Reno reopened in 2014 as Whitney Peak Hotel, a 310-room non-gaming hotel that includes a 164-foot-tall outdoor climbing wall.

“There has been a slight shrinkage of slot machines in the market. You see more of a Dotty’s type of locations popping up,” Cardinal said of the tavern business that is primarily a slot parlor.

That’s one reason Cardinal views The Western Village and the Nugget, two of Sparks’ largest hotel-casinos, as competition. He said Northern Nevada gaming customers “like to travel around and go to the outlying casinos, such as the Peppermill, Atlantis and the Nugget, and stay away from downtown.”

Cardinal said a potential customer told him last week that it’s an “easy drive” to Sparks. He also said some Casino Fandango customers will want to visit Legends Bay because player rewards cards work at both properties.

Food trucks in, buffet out

Cardinal said the 15-year delay, coupled with operational changes that came into play following the pandemic, allowed a redesign of Legends Bay. One of the notable changes is the absence of a buffet and, in its place, three food trucks.

The trucks have custom-made facades but were actual working food trucks that have been modified and converted. The tires remain, but the transmissions and the engines were removed. Doorways behind the trucks connect to the back-of-the-house kitchen.

“We had to move them in before we finished the outside of the casino,” Cardinal said.

The food trucks have a history, but the slot machine floor includes all new games except for a handful of older and popular International Game Technology slot machines that were brought in from Casino Fandango.

The sportsbook will be operated by Las Vegas-based Circa Sports, giving the company operated by downtown Las Vegas casino owner Derek Stevens its first Northern Nevada location. The sportsbook has a capacity for 140 people with various seating options, multiple 60-inch TVs, and a 10-foot-by-15-foot Daktronics video board displaying live odds and the day’s games.

Cardinal said he received positive feedback from Casino Fandango players who were brought in to sample the food offerings from Duke’s Steakhouse and the food trucks.

“They told me they were blown away by the property,” he said. 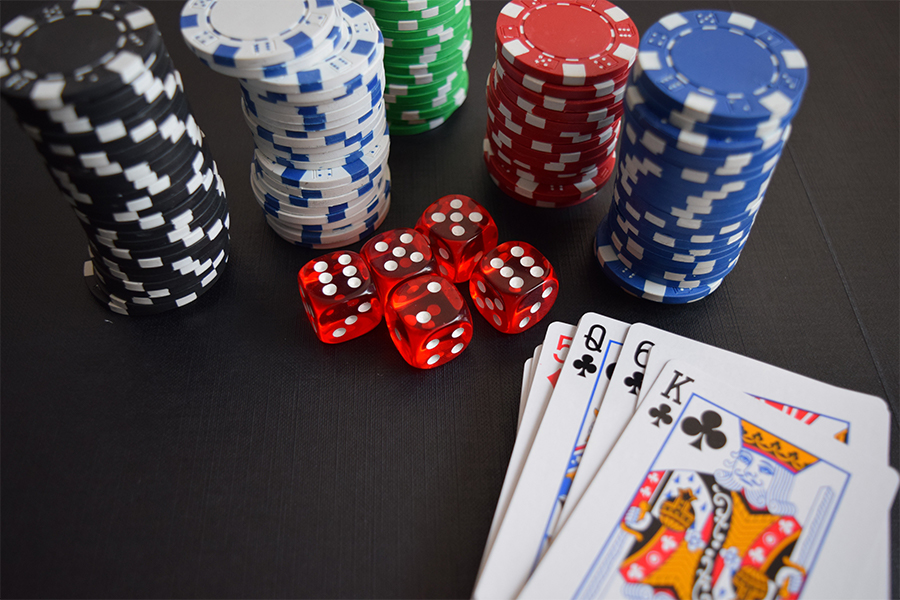 Legends Bay Casino and @CasinoFandango team-up with @QCIntell in a bid to align marketing, player and casino operations around one view of data.

How Circa Resort & Casino, Daktronics Spice Things Up with New LED Displays

Circa Resort & Casino has installed six new LED displays in two locations in Nevada this summer. Four displays were installed at Circa Sports Sportsbook in Legends Bay Casino in Sparks and two displays added to Circas new meeting and convention space in Las Vegas. The displays deliver up-to-the-second odd and betting information and show live sporting events. Outside the venue, a new marquee display was installed to inform passersby of current and upcoming events, specials and more. It measures 25 feet high by 22 feet wide and features a 15-millimeter pixel spacing.
Sports ・ 8 days

Legends Bay Casino finally opened its doors last night on August 30 after 16 years in the making. It is located near the Outlets at Legends, Hampton Inn, and Residence Inn by Marriott. The casino is appealing to gamblers of all ages and backgrounds. There are more than 660 slot machines on the casino floor, including favorites such as Buffalo and Lightning Link. The Casino pays a minimum of $12/hr for tipped positions. and it goes up from there. They have the only fully arched Buffalo machine in Northern Nevada. Their points system within the Players Club is their secret sauce.
Sports ・ 05 September 2022

Legends Bay casino has opened its doors for the first time on Tuesday. It is the new casino in Northern Nevada.
Land-based ・ 22 days

Legends Bay Casino at The Outlets at Legends, in Sparks, Nevada, opened its doors to the public on Tuesday evening. It's the first new casino to open in Northern Nevada in more than two decades. The casino took 15 years to build and cost $130 million. Governor Steve Sisolak called it a great night for Nevada. Legends Bay features the region's only Circa Sportsbook and three restaurants. The Circas are a first in the Northern Nevadans. They are also popular with sports fans. There are over 650 slot machines and video poker machines, 10 Live Table games, five blackjack tables, craps, roulette, three card poker, Pai Gow poker and Ultimate Texas Hold’em.
Sports ・ 31 August 2022

New Casino Opening At The Legends Mall In Sparks

New Casino Opening At The Legends Mall In Sparks. Legends Bay Casino is opening up at 8 pm tomorrow. The land the casino was built on was purchased back in 2006. It's the first Circa Sports Book in Northern Nevada. The best part of the process for the owner of Circasports was hiring the right people. He is happy with the results. They are hiring their team members. There will be a ribbon cutting at 4:30 p.m. tomorrow at Legends mall. This is the new casino opening for first time tomorrow after 16 years of planning. it's a beautiful elegant casino but comfortable. According to the president of Olympia Gaming, it will not be shown to public until it is ready.
Sports ・ 30 August 2022

Legends Bay Casino is set to open from August 30 at the Outlets at Legends shopping mall in the northern Nevada city of Sparks. The premiere is to be followed by a special September 2 fireworks display.
Gaming Authorities ・ 28 July 2022

Nevada Gaming Commission approved licensing for Legends Bay Casino on June 23. The casino is located in the Sparks Marina. It will have a 40,000 square foot casino with 660 slot machines and 10 table games. There will also be a sports book operated by Las Vegas-based Circa Sports.
Gaming Authorities ・ 14 July 2022

Legends Bay Casino in Sparks has received final approval from the Nevada Gaming Commission. The casino needs to fill nearly 300 positions including in casino, food and beverage, engineering, and security. Job fairs will be held each week starting July 13 and will run through August 3. On-the-spot offers may be made including a possible $500 signing bonus.
Gaming Authorities ・ 23 June 2022

Legends Bay Casino will open in August. The state's Gaming Control Board recommended licensing approval for the venue. It will make a final decision on June 23. Legends Bay will be the first from-the-ground-up casino development in the Reno-Sparks metropolitan area in more than two decades.  The 40,000-square-foot casino will have 660 slot machines and 10 table games, 300 employees and a sportsbook operated by Derek Stevens’ Circa Sports.
Sports ・ 09 June 2022

Olympic Gaming has named DeCourcy Graham, Robin Nedza and Court Cardinal to the leadership team overseeing the development and operations of Legends Bay Casino in Sparks. Cardinal is the president and general manager at Casino Fandango in Carson City. He has opened two casinos in his 30-year career. Graham worked for Olympia Companies for 17 years as its chief marketing & development officer. Nedzza has spent the last 20 years with Olympia. He is a member of the American Institute of CPAs and Financial Executives International.
Travel ・ 30 August 2021

Olympia Gaming broke ground on Legends Bay Casino in Sparks on Wednesday. The gambling venue is expected to open in mid-2022. It will be integrated into The Outlets at Legends shopping and entertainment center. The entire property is located just off Interstate 80 and approximately six miles from Reno-Tahoe International Airport in Nevada. Olympia Gaming had planned to start construction in 2020 but the plans were put on hold due to the Covid-19 outbreak and the closure of non-essential businesses in the state.
Covid ・ 08 May 2021

Court Cardinal is responsible for the design of the casino at the new Legends Bay Casino in Reno-Sparks. He spent a lot of time on the details before the opening of this $130 million casino. There are 6,000 gaming machines on floor at Legends bay casino and they have to pay taxes on every one. The casino opens on August 30th. There will be 300 employees. It will also be the first new casino project in the area for more than two decades.
Sports ・ 25 August 2022