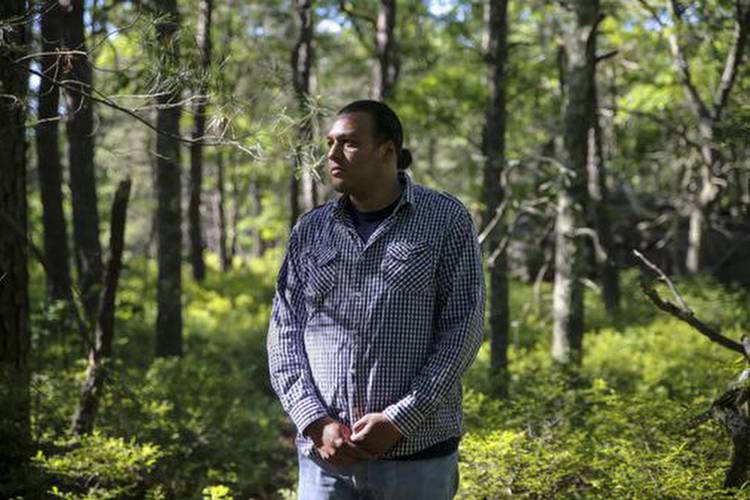 The Mashpee Wampanoag Tribe regained legal status for its reservation land in southeastern Massachusetts this week following a decision by the US Department of the Interior, reopening the door for the tribe to continue exploring plans for a $1 billion casino in Taunton.

The ruling, issued Wednesday, marks the end of a years-long legal saga and allows the tribe to move forward with crucial needs, such as fighting water pollution on the land and improving housing for its 2,600 enrolled citizens. The reservation’s legal status had been in limbo since March 2020 when the Interior Department, then under Donald Trump’s administration, ordered the land to be taken out of trust.

Brian Weeden, chairman of the Mashpee Wampanoag Tribal Council, welcomed the ruling but said it did not fully redress the land stolen from the tribe. The tribe’s reservation land — about 320 acres in Mashpee and Taunton — makes up only half of 1 percent of the tribe’s ancestral territory, he said.

“I think it’s a small step in the right direction when we talk about justice,” said Weeden, who at 28 became the tribal council’s youngest chairman ever elected earlier this year.

“It’s bittersweet,” he continued. “It’s a happy and joyous time but it is also a time for us to reflect on our ancestors who paid the ultimate sacrifice for us to still be here.”

The Mashpee Wampanoag — which means People of the First Light — were annihilated by English settlers in the 17th century. Back then, the tribe had as many as 40,000 people across 67 villages, and their land covered all of what is now Cape Cod and stretched from Weymouth to parts of Rhode Island, according to the Plimoth-Patuxet Museum in Plymouth. The tribe was forced onto land that later became the town of Mashpee. Centuries passed before the tribe finally gained federal recognition in 2007.

Representative Bill Keating, a Bourne Democrat and longtime ally of the tribe, denounced the move at the time as “cruel and nonsensical.”

His feelings haven’t changed in the year since.

“It’s unfortunate we had to go down this path because to me they’re obviously a tribe,” he said in a phone interview Friday. “This is a decision for justice and the right thing to do in a long,marred history in our country with our treatment of Native Americans.”

“What bothered me the most is what they went through, the injustice of it all,” Keating added. “Now it’s been rectified. I’m extremely pleased.”

With its legal standing now confirmed, the tribe has the opportunity to apply for federal funds included in the recent infrastructure bill, Keating said.

“Without this decision, they wouldn’t have the land to apply for this on,” he said. “The timing of this decision in terms of the infrastructure bill we passed is critical.”

The bill, a $1 trillion spending plan signed by President Biden in November, includes $3.5 billion for the federal Indian Health Service plus additional funds to improve water quality on tribal lands.

Weeden said he is more concerned with those issues than he is about the $1 billion First Light Resort & Casino planned for the tribe’s 170 acres in Taunton, a project that was ushered through the years by his predecessors and broke ground in 2016 but remains a vacant construction site.

“The casino is kind of on the backburner,” he said. “We need to work on the environment, cleaning up our waterways, and acquiring more land and housing. Those are the top priorities of our administration.”

Keating said he spoke to Weeden after the decision came out and their conversation focused on infrastructure, clean water, and the tribe’s history. He said the reservation’s acreage is “just a tiny fraction of their footprint at the time” when settlers arrived.

The casino, Keating said, was hardly brought up.

“We didn’t dwell on the casino issue,” he said. “I know financially this was a situation where absent this decision ... it would have been existential in terms of the threat to the tribe.

“They’re a sovereign nation,” he added. “They’ll make their own decisions.”

It’s unclear now whether the tribe will decide to move forward with the casino. In June, shortly after he was elected chairman of the tribal council, Weeden told the Globe that, from his perspective, the casino project was “pushed down everyone’s throats” by previous leaders. His two most recent predecessors were brought down by embezzlement, bribery, and extortion scandals.

Weeden said he is leaving the decision on the casino’s future to the tribe’s citizens. He said the council has distributed surveys to gauge support for the project and “there still seems to be an appetite for gaming.”

Weeden said the tribe has been in contact recently with the casino’s main investor, Genting Malaysia, which bought out the previous investors. He said the relationship between the company and the tribe “is alive and well.”

“The tribe is considering all options,” Weeden said. “We’re still feeling out the membership and community to see what they want to do. Whatever their wishes are is what we’ll carry out.”

Material from the State House News Service, Globe wire services, and previous Globe stories was included in this report.

- #Massachusetts lawmakers running out of time to legalise #sportsbetting this year Legislators have until July 1 to bridge the differences between the Senate and House bills.

Baccarat is amongst the most celebrated casino games across the globe. At Lion Gaming, our version of baccarat is based on the popular Punto Banco variation. Read this article to learn more about baccarat software and Lion Gaming’s baccarat solution

The Ho-Chunk Nation's Beloit casino and resort project took key administrative steps forward last year. Wisconsin Democratic Gov. Tony Evers issued a concurrent decision aligning with the federal Bureau of Indian Affairs on March 24, 2021. The tribe conducted initial work at the casino site in October of last. The city manager is "thrilled" to see the project take a key step forward. It was approved in March of 2020. A contractor for the tribe did geotechnical soil borings around the site. They are critical to understanding the soil structure below the property.
Politics ・ 31 March 2022

New law affirms the operation of a casino in North Carolina by the Catawba Indian Nation. The Catwba Two Kings Casino will be built for $273 million. It is a setback for the Eastern Band of Cherokee Indians, which operates two casinos in far western North Carolin. The law clarifies that the tribe is subject to tribal gambling laws. A federal judge sided with the catwaba tribe last year. He ruled that they could build the casino. They hope it will help lower the tribal unemployment and poverty rates.
Law ・ 01 January 2022

Aquinnah Wampanoag Tribe of Gay Head Aquinnaha wants Gov. Charlie Baker to enter into negotiations for a Class III casino compact. The document became public at Monday’s select board meeting in Aquinah. A Class 3 casino would allow for slot machines and table games such as blackjack and roulette. Massachusetts has two Class Three casinos and a slot parlor. There is no third Class Third casino for southeastern Massachusetts. Tribal members are considering a property in New Bedford to expand services. The tribe had its rights to a bingo hall, but work was halted by a legal challenge.
Gaming Authorities ・ 23 November 2021

The Ho-Chunk Nation's casino-resort entertainment complex is going to start construction soon. A contractor will conduct geotechnical soil borings around the site. The borrings are critical to understanding the soil structure below the property. It's not part of the vital fee-to-trust land transfer process that's pending with the Department of Interior. Gov. Tony Evers approved the tribe’s casino and resort plan on March 24. The complex will bring about 1,500 permanent jobs and “thousands” of construction jobs to the Beloit area.
Law ・ 06 October 2021

A federal judge has ruled against the Native Village of Eklutna's attempt to bring a small casino to tribal lands 20 miles north of downtown Anchorage. Alaska has only one formal tribal reservation, the Metlakatla Indian Community on sparsely populated Annette Island. The rest of its indigenous lands are governed under the Alaska Native Claims Settlement Act of 1971.
Blackjack ・ 25 September 2021

Two Indigenous tribes announced plans to build casinos in Sonoma County in late 2002 and early 2003. Koi Nation, a distinct band of Pomo people, surprised everyone last week with announcement of their plan to built a massive casino and resort near Shiloh Regional Park between Windsor and Santa Rosa.
Politics ・ 19 September 2021

Seminole tribe controls six casinos in Florida and six more in other states, Canada and the Dominican Republic. It's poised to take exclusive control of the largest legal sports betting operation in the country thanks to a deal cut this spring with Gov. Ron DeSantis and Florida legislature. The arrangement will generate $6 billion for the state through 2030. Critics say it's a blatant move to circumvent federal law governing Indian gaming. Interior Secretary Deb Haaland must approve or reject the compact within 45 days.
Winnings ・ 11 July 2021

Southwest Parimutuels, owner of Miami's Magic City Casino and Bonita Springs Poker Room, has filed a federal lawsuit challenging the Florida gaming compact between the state and Seminole Tribe of Florida. The compact allows sports betting outside of tribal lands in Florida and allows existing racetracks and jai alai frontons to develop their own mobile apps. The tribe will guarantee at least $500 million in annual revenue payments to the State for the next 30 years. Anyone in the age of 21 can start placing and collecting online wagers on sporting events from anywhere in state beginning on October 15.
Law ・ 05 July 2021