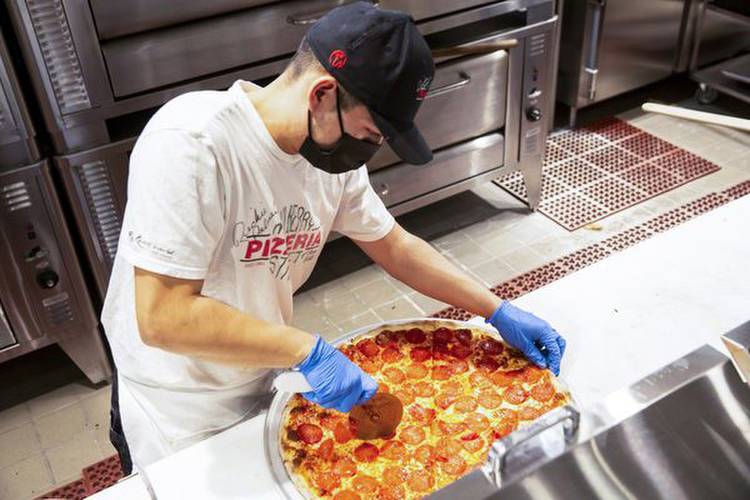 According to a news release, the Culinary and Bartenders unions recently reached a “tentative agreement” with Resorts World in a new contract.

About 2,000 employees who work at the Strip resort will be represented under terms of the contract.

Union officials, according to the release, said nearly all employees voted to accept the first-time contract, which was ratified last week.

In a statement, Ted Pappageorge, secretary-treasurer for the Culinary Union and lead negotiator for the deal, called the contract “strong.”

The resort, the newest on the Strip, opened in June. Negotiations for the contract started in December. The contract is set to start on June 1.

Employees who will work under terms of the agreement include hotel room attendants, cocktail and food servers, porters, bellmen, cooks, bartenders, laundry and kitchen workers, and others.

“Resorts World Las Vegas prides itself on providing our guests with remarkable experiences, and that begins with our team members,” said Scott Sibella, president of the resort, in a statement. “We are happy to announce a final agreement that recognizes the value of our employees and their contributions to the property.”

The resort, which cost $4.3 billion to build, sits where the Stardust once was.

Boyd Gaming razed the Stardust in 2007 with plans for a new resort, but that project was scrapped amid the Great Recession.

Genting Group, a hospitality and casino company based in Malaysia, purchased the 88-acre site where Resorts World now sits in 2013.

Currently, if you are caught dealing drugs or prostituting, a judge can ban you from the Las Vegas Strip for up to one year.

Katy Perry received a key to the Las Vegas Strip in June. The ceremony symbolically unlocks the one-year anniversary of Resorts World Las Las Nevada. It is the most expensive hotel-casino in Nevada history at $4.3 billion. Perry is performing at the Resort World Theatre through August 13. She will perform at another show over eight days in the fall, beginning October 5.
Travel ・ 24 June 2022

The ongoing battle between the Culinary Union and Station Casinos continues. The casino operator has refused to recognize legal attempts by workers to unionize.
Travel ・ 07 February 2022

Vegas casino workers union rally on Strip demands jobs back amid record industry recovery. Culinary Workers Union members rallied on Thursday night, starting 5 p.m., partially shutting down the Vegas Strip between Harmon Avenue and Paris Drive. According to the union, 35% of its 60,000 members have not returned to work 20 months after the pandemic began. The union last held a massive rally in September. The gaming industry rebounded significantly this year, delivering a streak of seven straight months topping $1 billion. Nevada had the highest unemployment rate in the U.S. at 7.5%.
Jobs ・ 29 October 2021

There are 21,000 casino workers in Nevada who are out of work. The union claims many of them have used up all their public jobless benefits. On Friday, thousands of workers marched on the Las Vegas Strip, demanding employers rehire them. The march was not a demonstration against anyone casino operator. It's been a record-breaking month for winnings at casinos across the state.
Land-based ・ 04 October 2021

Thousands of hotel, casino and restaurant workers marched on the Las Vegas Strip on Friday to protest the lack of jobs for workers who were furloughed last year because of the coronavirus pandemic. About one-third of Culinary Union's members remain out of work some 19 months after the pandemics hit Nevada. Many idled employees have now exhausted public unemployment benefits.
Jobs ・ 26 September 2021

The Station Casinos is a talking point for politicians. Vice President Kamala Harris visited the Culinary Workers Local 226 in November 2019. She was there to talk about Station's treatment of its workers. Joe Biden visited them a month later. The union did not endorse the presidential candidates. It did endorse a collective bargaining agreement for its members. The dispute started in 1993. In 2008, the MGM Grand Las Vegas opened. There is still a long-standing labor dispute between Station and Red Rock Resorts. They are trying to resolve it.
UFC / MMA ・ 19 September 2021

Station Casinos under Fire from the Culinary Union over Planned Casino

Station Casinos and the Culinary Union are locked in a fierce battle over attempts to have workers unionize in Las Vegas. The union is now threatening the casino operator's plans to build its Durango Station casino near the Las Las Vegas Strip.
Travel ・ 08 September 2021

Station Casinos workers are protesting in front of the Culinary Union headquarters. They want their workers to respect their decision not to have union representation. Union says there's more to the protest than meets the eye. Station Casino workers from Palace Station and Boulder Station voted no on unionization last year.
Jobs ・ 23 August 2021

The Culinary and Bartenders Union is pleased with the federal court ruling. The union wants to unionize about 1,350 employees at Station Casinos. Station has resisted unionization efforts for years. A National Labor Relations Board lawsuit is pending. The company is required to hold mandatory meetings on company time over the next two weeks. It is also required that the order can be read aloud in English and Spanish to all employees. Red Rock Resort opened in 2006. Its 800-room resort is near the Redrock Canyon National Conservation Area.
Jobs ・ 11 August 2021

A federal judge has issued an injunction against Red Rock Casino. The Culinary and Bartenders Unions are the official bargaining representative for the 1,350 employees. Station Casinos is ordered to recognize the unions and notify employees within five days. The Union has been trying to organize a union election since December 2019.
Jobs ・ 23 July 2021

As US Casinos Reopen, Hiring Back Employees Proves Difficult

After months of restrictions, casinos are opening their doors again. However, they are still struggling to recruit a dedicated workforce. Colorado, Massachusetts and Nevada are three states with casinos having trouble filling the jobs left behind by the coronavirus pandemic.
Jobs ・ 15 June 2021

Las Vegas casinos are buzzing again. But many workers remain out of work

Tami Paynter was laid off a year ago from her union job at the Plaza Hotel & Casino. She has a mortgage, job applications that go nowhere and retirement plans that may pause. Las Vegas casinos are buzzing again, but many workers remain out of work. There are thousands of people applying for the same job.
Land-based ・ 07 May 2021

After the Coronavirus, casinos are opening to full capacity. However, they lack the committed workforce that is used to propel operations smoothly. Casinos in Nevada and Massachusetts are having a hard time filling vacant positions.
Travel ・ 15 June 2021