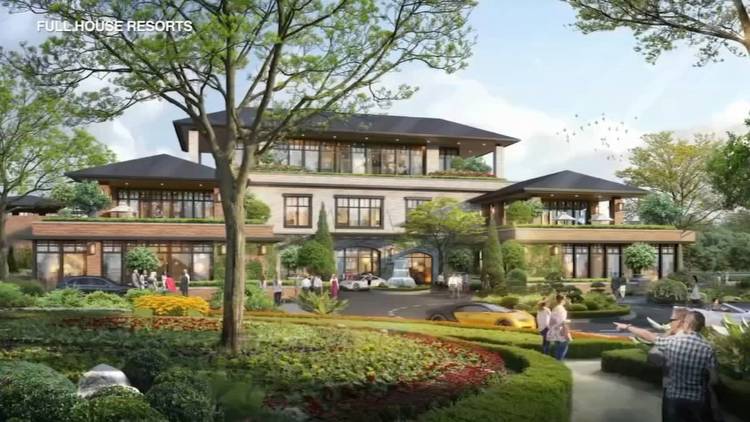 CHICAGO (WLS) -- The Illinois Gaming Board dealt a winning hand Wednesday to a pair of proposals for casinos in Waukegan, and one that would border Homewood and East Hazel Crest in the south suburbs. The decision came after months of anticipation and brings with it economic hope for those communities.The sun was shining on Homewood and neighboring East Hazel Crest after a nine-year effort of the two longtime village leaders to bring a casino to their communities finally in the cards.
RELATED: IL officials narrow suburban Chicago casino bids to 2 as part of Pritzker's gambling expansion"Very happy. I had been cautiously optimistic and it's just a joyful feeling," said Homewood Mayor Rich Hofeld.The Wind Creek Casino would be a 70,000-square-foot facility with slots and table games, entertainment, dining and a 252-room hotel. The developer is estimating it will bring 800 jobs to the region."I want to thank them for saving a village," East Hazel Crest Village President Thomas Brown said. "They saved our little village of 1,300 people. This is our last piece of property that we could develop."The site beat out one proposed by the village of Matteson, where officials planned a watch party only to have their hopes dashed.The gaming board did not give a reason, but the East Hazel Crest village president believes it all came down their location right off I-80, which would enable them to draw gamblers from Indiana as well."If you look at the statistics, there's almost 218,000 vehicles that go by our site every day, compared to Matteson, where they have 50,000 vehicles every day," Brown said.In Waukegan the gaming board awarded the winning bid to American Place Casino, a luxury facility that will include a helipad and 20-room mansion for high-roller guests. It would bring 1,900 jobs, and would be built on the Fountain Square property owned by the city."Having a heliport and all of that, it basically opens up tourism for Waukegan," Waukegan Mayor Ann Taylor said. "I mean, you will get people coming from not all over the country, but from all over the world. And that is an engine that drives economic development."South suburban officials are hoping the break ground in March, with the Wind Creek Casino expected to open in 2023.

In Waukegan, the mayor said a temporary casino could be up and running there in six months with the full casino operational in two years.

Six months after the casino received initial approval from state gaming regulators, construction is getting underway. Most of the work is taking place below ground. The project will create about 600 construction jobs. It is expected to create 800 permanent jobs once finished. A 70,000-square-foot casino will feature 1,350 slot machines and 56 table games. The casino could be ready for customers by late summer or early fall of next year, with a 252-room hotel to follow in 2024. Poarch Band of Creek Indians decided not to build a temporary casino.
Jobs ・ 10 June 2022

Wind Creek broke ground for a new casino in Cook County, Illinois. The project is expected to be completed in September 2023. Hard Rock is the only other operator currently operating a casino. Illinois lost $331 million annually in gaming revenue to Indiana.  Hard Rock has been operating in Rockford since November. Bally's applied for Chicago's downtown casino license. It was rejected. Governor Pritzker signed a gaming expansion bill in June 2019. He signed it with sports betting. Wind Creek estimated creating 600 new construction jobs and generating $155 million in revenue by 2025.
Covid ・ 07 June 2022

Full House Resorts finalized an agreement with Waukegan to open a temporary casino. The temporary facility will be open by September. It will stay open while the permanent facility is under construction. After the temporary agreement, Full House has an option to purchase the land for $30 million. Bally’s in River West is on track to be operated by Fullhouse. Governor JB Pritzker signed a 2019 bill into law that created paths to new casinos across the state. A $1.7 billion proposal for a Baly”s casino in Chicago was approved by the City Council last week.
Travel ・ 11 May 2022

Illinois Gaming Board approves preliminary approval for a new casino to open in Danville. It's the 15th casino approved in Illinois since the state legalized casino gambling in 1990. The biggest jackpot of the gambling expansion is the Chicago casino. Mayor Lori Lightfoot is considering five proposals to run the casino, and she's expected to pick a finalist this spring.  Pritzker is betting on the expanded gambling options and the resulting tax revenue to help fund his $45 billion capital infrastructure improvement plan. Only one of those casinos has started taking bets.
Covid ・ 11 March 2022

The Illinois Gaming Board has selected a proposal from the combined villages of East Hazel Crest and Homewood to build a new casino. The proposal is for a 64,000 square-foot casino off of Interstate-80 and Halsted Street. It would cost $440 million and house 1,300 slots and 56 table games.
Jobs ・ 09 December 2021

Wind Creek Hospitality is one of two finalists for South Suburban Casino. The Illinois Gaming Board is expected to make a final decision in the coming months. The proposed location is in East Hazel Crest and Homewood. It will be located directly off I-80 near Halsted Street and 175th Street. Nearly 80 million vehicles pass by Wind Creek’s proposed development each year.
Travel ・ 03 December 2021

The Illinois Gaming Board is considering a casino license application from Southland Cook County. The board did not vote on the three finalists Wednesday. They will meet again next Wednesday to choose a winner. The winner will be announced by January. Illinois Gov. JB Pritzker signed a gaming expansion bill that legalized sports betting in June 2019. State Rep. Anthony DeLuca asked him to push the IGB into action.
Gaming Authorities ・ 14 October 2021