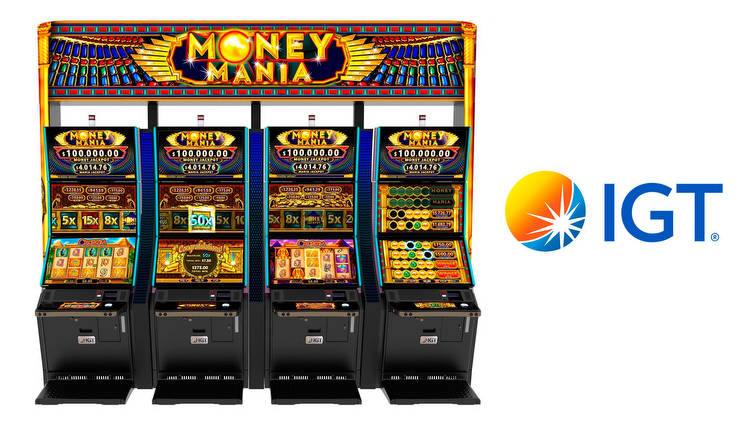 Money Mania is housed on IGT’s triple-screen PeakSlant32 cabinet, and features two base game themes, “Pharaoh’s Fortune” and “Cleopatra." The game includes many mechanics and is characterized by its static top-level “Money Jackpot” and the frequency of its second-level “Mania Jackpot” WAP jackpot.

Mohegan Sun Casino at Virgin Hotels Las Vegas, Circa Resort & Casinoin Las Vegas, and Hard Rock Hotel & Casino Atlantic City are amongst the first commercial casinos in the U.S. to feature this game.

Derek Stevens, Circa Resort & Casino CEO, spoke about this addition and said: “After playing IGT's Money Mania, I immediately knew that I had to give players at Circa Casino & Resort an opportunity to experience this high-excitement game. As we've seen with IGT's Wheel of Fortune and Megabucks games over the years, players actively seek out games that award frequent and significant jackpots. Our guests are readily embracing Money Mania on our gaming floors which leads me to believe that it will have real staying power."

Nick Khin, IGT Chief Operating Officer, Global Gaming, added: "It has been exciting to watch IGT customers and their players benefit from the thrill of Money Mania's compelling gameplay and how frequently they're hitting the second-level jackpot. In launching Money Mania in commercial jurisdictions and linking its liquidity between the largest gaming destinations in the U.S., IGT is elevating jackpot excitement across the country and giving our customers another way to engage players and differentiate their casino floors."

Through its early deployments in tribal casinos, Money Mania has delivered on its high-performance promise by achieving more than 2x or above floor average play in many of the venues, IGT says. Additionally, players across the country are enjoying frequent payouts from the title's second-level jackpot that is linked through WAP technology.

99 jackpots and counting! The secret to Money Mania™ Video Slots is the fast-incrementing secondary jackpot, averaging around $7,668.62. This Wide Area Progressive is catching the attention of players, increasing the jackpot every day!

Can you believe it? Money Mania™ Video Slots has already hit 79 jackpots! (And more every day, but who is counting?) The Wide-Area Progressive nature of the game creates an atmosphere of excitement and thrill for players. Learn more

IGT's Money Mania Wide Area Progressive has won its 100th jackpot in the US at Newcastle Casino in Oklahoma. The game was launched in commercial jurisdictions in May following a successful introduction in tribal gaming jurisdictions. Moneymania is available on IGT’s PeakSlant32 cabinet and features two of the company's most popular themes, Cleopatra and Pharoah”s Fortune. IGG reported one of its highest EBITDA margins ever in Q2, with revenue of $1.2 billion.
Winnings ・ 1 day

IGT to introduce CMS, games and cabinets at upcoming Nustar Resort and Casino in Philippines

IGT's latest WAP game Money Mania is now live in commercial gaming jurisdictions Nevada and New Jersey. Mohegan Sun Casino at Virgin Hotels Las Vegas, Circa Resort & Casino in Las. Vegas and Hard Rock Hotel & Casinos Atlantic City are among the first commercial casinos in the U.S. to feature the game. The game is housed on IGT's award-winning, triple-screen PeakSlant32 cabinet and features two compelling base game themes, Pharaoh's Fortune and Cleopatra. It is famous for its highly attractive, static top-level "Money Jackpot" and the frequency of its second- level "Mania Jackpots" Wap jackpot.
Winnings ・ 23 May 2022

IGT Powerbucks slots player won CA$2.129 million at Casino Nanaimo in British Columbia, Canada. The largest IGT Powerbuckets jackpot was CA $2 million in May 2020. The Power Buckets link has awarded more than 30 jackpots in Canada since its debut. It is a leading industry-leading slot game.
Winnings ・ 18 March 2022

Derek and Greg Stevens from Detroit are building a new Las Vegas casino. The Circa Resort & Casino Las Las will open in October 2020. It will be the first ground-up hotel-casino in more than 40 years.
Covid ・ 21 January 2022

Two gamblers won over $1 million in jackpot winnings each in Las Vegas. Quoclong Pham from Vancouver, Washington won $2,393,273 at Face Up Pai Gow Poker at Harrah's Las Las. PhAm placed a side bet that allowed him to enter the Mega Progressive Jackpot.
Pai Gow ・ 18 December 2021

Making Millionaires: California woman wins over $1M Wheel of Fortune jackpot at Circa

Nikki from California won $1.075 million on the Wheel of Fortune machine at Circa Las Vegas. The Circas CEO Derek Stevens was on hand to celebrate.
Winnings ・ 15 November 2021

Circa Resort & Casino opened its doors a year ago. It is downtown Las Vegas' first ground-up resort in 40 years. The resort bought world-class amenities and jobs. Resorts World is another example of a development in Las Las. David Schwartz believes that the two properties have helped put Las LV on a path where there will be more development. He believes Circa has improved the area and transportation in downtown.
Travel ・ 28 October 2021

Go Go Claw is a controllable claw-like gambling game that's popular in Las Vegas casinos. The D Las Las Vegans got the first two machines on June 29. They were an instant hit. Circa Resort moved the upstairs machine to take advantage of the game's early popularity. The game has been field tested at a handful of Southern Nevada casinos, including three in Vegas. There are lines forming at both machines most evenings. San Diego resident Adrian Zamora won a few times on his first go at the claw. He could play only because an Aruze mechanic fixed the reeling mechanism about 15 minutes earlier.
Land-based ・ 31 August 2021

IGT's most popular slot machine, Wheel of Fortune, is celebrating 25 years of existence. The company is observing the anniversary with a special Facebook page and special giveaways. IGT introduced wide-area progressive jackpots in 1996. The earliest Wheel game didn't have a wheel. It was a three-reeled mechanical-neither nickel slot game with the game-show theme. In 2000, I GT introduced the concept with Megabucks. 10 years later, the wide area progressive system was introduced. This system is responsible for the success of Wheel.
Movies ・ 09 August 2021

CEMEX supplies ready-mix concrete for the Circa Resort & Casino in Las Vegas. CEM EX supplies more than 65 000 m of ready mix concrete. The resort opened in October 2020. It is the first new resort property to open in downtown in more that 40 years.  The resort boasts 777 hotel rooms, six bars and lounges, 6 temperature-controlled swimming pools, world's largest sportsbook with seating for 1000 people and a three-story high-definition screen.
Land-based ・ 28 May 2021

Delores Raymond won $238,559 at Palace Station off-Strip casino on Thursday. The big win was off a $1.25 bet on IGT’s Wheel of Fortune slot machine. It's the second Wheel-of-Fortunetopical jackpot at Station Casinos in less than a week.
Winnings ・ 07 May 2021

It's 99 days until the Circa Resort's grand opening. The soon-to-be casino shared a video on Twitter showing its first slot machine arriving on the property. Circas will be the first new downtown gaming resort in nearly 40 years.
Finance ・ 19 January 2021

Microgaming rolls out 4th November slot Tiki Mania. It is the sixth title created by the studio introduced by Microgaming in early October 2018. The game is about Kaia, a Hawaiian princess fleeing to a tropical island paradise where animated tikis run amuck.
Winnings ・ 30 January 2022