Rank Interactive will roll out HITSqwad's first two jackpot slots: Bravo Mission and Ragnar. The games will be available on both online sites after an exclusive time period with their players. They will follow with several additional games over the coming months. HITSWAD CEO Charl Geyser is excited about the debut of the games. He hopes to give players the chance to "Strike it First". The game is based on the "First Strike" jackpots theme.

HITSqwad makes its debut with Rank Interactive. Bravo Mission is a military-themed game where players will feel the adrenaline as they make tactical decisions to try win a jackpot. Ragnar transports players to the Viking age where lighting will pulse through their veins as the win cash and unlock jackpots. 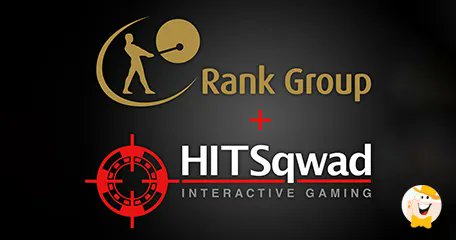 This is an incredible debut deal for HITSqwad and they look forward to working with @therankgroup and giving their players the chance to “Strike it First”. 👏

Design Works Gaming expands in the UK with Rank deal

Design Works Gaming has expanded its presence in the UK with the signing of Rank Interactive as its latest operator partner. The agreement will see DWG classics such as Diamonds, Sapphires & Rubies go live with Rank Group's Mecca Bingo and Grosvenor Casino brands in UK. It coincides with Grosenor Casinos migration to Rank's proprietary platform.
Bingo ・ 19 hr

Best US and UK casino shares

Rank Group, which owns Grosvenor casinos and Mecca bingo halls, returned to profit for the full-year in August. Rank's shares are down 53% in the past year and trade on a price earnings ratio of just six. The company's high rollers are feeling the effect of the cost of living squeeze.
Covid ・ 22 August 2022

Grosvenor Casino and Leicester Travelodge hotel in England is for sale with a $12.2 million asking price. The hotel has 95 rooms across four floors and underwent a £325,000 ($389,720) refurbishment in 2014. Grosensor Casinos Limited was established in 1966 and operates 52 casinos throughout the UK. As of December 2021, Travel Lodge was the second-largest budget brand in the country with more than 592 hotels.
Bingo ・ 07 July 2022

Rank Group has partnered with GamCare to provide safer gambling and social responsibility training to over 1,400 employees. The programme will see Gamcare deliver 150 days of training. Rank Group plc. (LSE:RNK) were trading 1.1% today. i in terms of shares. i.am. I am certain that our colleagues will benefit enormously from their expertise. which will, in turn, give a much improved service to our customers. John O’Reilly, Rank CEO. Gam care CEO Anna Hemmings is pleased to be extending their partnership with Rank to deliver safer betting training across all their brands.
Law ・ 18 May 2022

Numbers are not yet lining up for Rank after Covid

Rank is struggling to recover from the effects of the pandemic. Revenues from its casinos were down 14% in the three months to the end of March. UK bingo halls fared even worse, with revenues down 25%. Enracha, its Spanish bingo business, continued to grow.
Covid ・ 22 April 2022

Rank's operating profits rocketed 295% to £103m in the six months ended 31 December. Rank's gambling company is aiming to reach £1bn of revenue by FY23. The company will accelerate its transformation programme. The resumption of dividend payments will be considered when allowed. It is estimated Rank will reach c £820m revenue in FY22. Omicron, a new gambling brand, has hit Mecca and Enracha hard. Mecca's older customers have been cautious. In January Rank completed the transition of online bingo website meccabingo.com to proprietary trading platform RIDE. Grosvenor's transition is expected to take place in summer.
Covid ・ 27 January 2022

Grosvenor Casinos will use Table Games Management (TYM) software from Tangam Systems to improve efficiency and transparency of their table games operations. Grosvion Casino is the UK's largest casino operator with operations across Europe. The software empowers the team to make important decisions within minutes. It also allows them to meet the demands of customers in real time.
Industry ・ 06 December 2021

HitSqwad to launch in Great Britain with new licence

HitSqwad has been granted a new licence by the British Gambling Commission. The company plans to launch its jackpot games in core regulated markets around the world. Its first titles are set to go live in Britain via Playzido early in 2022. HitSquad is focused on developing bespoke online jackpots games. It offers its products under royalty agreements to licensed gaming operators or affiliates in markets worldwide.
Gaming Authorities ・ 29 November 2021

HITSqwad has been granted a Remote Gambling Software Licence by the UK G gambling commission. Its first jackpot games will be available to players in the country via Playzido early next year. The company's CEO is looking to secure more licences in other key regulated markets. He is also looking for partners to develop new jackpots. The games are flexible and customisable. They are expected to be popular with mobile players. There are also exciting features to trigger each jack pot. It is a significant market for the company.
Gaming Authorities ・ 29 November 2021

HITSqwad Interactive Gaming has received a license from the Gambling Commission regulator. The company plans to launch its first mobile-friendly title for the iGaming market of the United Kingdom early next year.
Gaming Authorities ・ 29 November 2021

Rank Group is set to get a $104.04 million refund on value-added taxes paid on slot machine income between 2006 and 2013. The company reached an agreement with Her Majesty's Revenue and Customs on a rebate of £77.5 million. Interest on the claim is expected to amount to £5. 5 million and both amounts will be subject to corporation tax at 19%. Pubs, arcades and betting firms were also in line to receive millions in tax refunds after they were unfairly charged VAT by the government on some of their gambling machines.
Finance ・ 25 November 2021

HITSqwad is a new iGaming developer. Its games are scheduled for launch in Q4 2021. Playzido will help the studio reach thousands of potential players. CEO Charl Geyser says that innovation is the most important goal of HITSquad.
Winnings ・ 10 September 2021

Rank set for £80m tax win after Revenue backs down

Rank Group believes it is in line for an £80 million tax refund over VAT paid on slot machine income. HM Revenue & Customs decided not to appeal against an earlier tribunal judgment.
Finance ・ 26 August 2021

Rank Group will receive a tax refund of around £80m. The company was unfairly charged VAT on some of its gambling machines. There are about 35,000 fixed-odds betting terminals in Britain and 190,00 slot machines of all types. Gambling industry in the UK is worth about £14.3bn a year. It is lucrative for the Treasury with betting companies paying £2.8bn in tax in 2020-21.
Law ・ 25 August 2021

Playzido teams up with HITSqwad for release of new jackpot slots

HITSqwad has teamed up with Playzido to take a specific type of slot titles live with operators in regulated markets worldwide.
Winnings ・ 23 August 2021

HitSqwad has formed a partnership with Playzido to supply a suite of jackpot slots to operators on the group’s network. PlayZido's platform allows the company to customise the games to fulfil regulatory standards in each of the markets it targets.
Industry ・ 19 August 2021

Pubs, arcades and betting firms could be in line for billions of pounds in tax refunds. They were unfairly charged VAT on some of their gambling machines. Up to 1,000 businesses with devices including fruit machines, one-armed bandits and coin-pushers are set for a rebate stretching back nearly 20 years.
Winnings ・ 17 July 2021