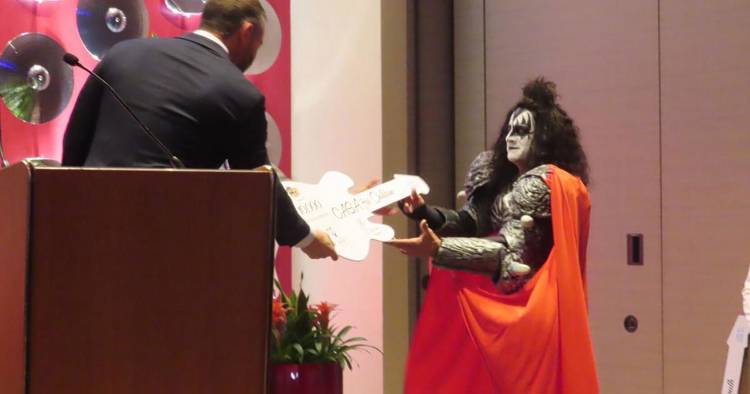 The casino donated $10,000 each to the Atlantic City Rescue Mission, CASA of Atlantic and Cape May Counties, Avanzar and Veterans Haven South.

The casino's president, Joe Lupo, said giving back to the community was part of Hard Rock's business plan long before the casino opened June 28, 2018.

“Philanthropy is in our soul and in our DNA,” he said during a ceremony inside the casino, during which actors impersonating the musicians Gene Simmons of Kiss, Cher and Prince assisted with festivities. “It has been very important for our ownership to give back to the community.”

Hard Rock International is owned by the Seminole Tribe of Florida, and the Atlantic City Hard Rock has three local investment partners.

The casino has made donations to 450 community groups in Atlantic City and Atlantic County in the four years it has been operating.

It hosted regular meetings with Black churches and community groups in the years leading up to its opening, and its owners have sponsored training and apprenticeship programs for local youths and adults to help them get jobs at the casino and in the building trades industry.

Hard Rock is the former Trump Taj Mahal casino, which closed in October 2016. Hard Rock bought the building in March 2017 from billionaire investor Carl Icahn, then gutted and renovated it.

Hard Rock said Joe Lupo will become president of the Las Vegas Strip casino once the sale is completed and approved by Nevada gambling regulators.

Mark Giannantonio has been appointed as the new president of the Casino Association of New Jersey. He succeeds Joe Lupo, who is moving to Las Vegas. Gianantonie has more than 35 years of experience in the gaming and hospitality industry. He is currently the President and CEO of Atlantic City's Resorts Casino Hotel. His professional background also includes nearly four years until May 2011 as President of Tropicana Casino and Resort. The Association promotes the casino industry in Atlantic city. It seeks to help the city transform into a leading destination resort location.
Travel ・ 4 days

Anthony Faranca was hired in June as Hard Rock's general manager. He will take over the top job when current president Joe Lupo goes to Las Vegas to run the Mirage casino. Faranai has been meeting with city officials on safety and cleanliness initiatives. He wants to continue Hardrock's history of supporting charitable and community groups. The casino is considering hotel room and suite upgrades and diversifying its entertainment lineup. Jim Allen, the global chairman of HardRock, has long pushed Atlantic City officials to make the city safer and cleaner. It's the No. 2 casino in terms of money won from in-person gamblers.
Incidents ・ 8 days

Joe Lupo is leaving Hard Rock Atlantic City to run Mirage Las Vegas. Anthony Faranca will take over as president on September 1. Hard Rook has come a lot since reopening the former Trump Taj Mahal four years ago. It is the No. 2 casino overall in terms of revenue.
Gaming Authorities ・ 13 days

Hard Rock Hotel & Casino Atlantic City is participating in the PINKTOBER campaign. The campaign supports breast cancer awareness and research. Proceeds from the campaign will go to the American Cancer Society. Hard Rock continues to live out its mottos of “Love All – Serve All” and ‘Take Time To Be Kind’
Land-based ・ 04 October 2021

Hard Rock Hotel & Casino Atlantic City celebrated their third anniversary this weekend. The celebration concluded with a community commitment this morning. The Atlantic Coast Rescue Mission, Covenant House and Turning Point Day Center for Homeless were each the recipients of $10,000.
Land-based ・ 29 June 2021