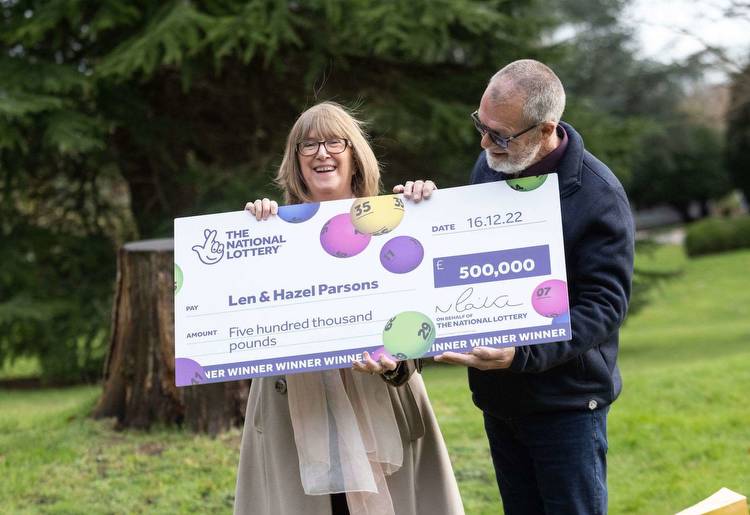 A stunned grandad thought there was a glitch on his phone when the National Lottery app flashed up that he'd won big.

But reality soon dawned on Len Parsons when he turned it off and on and the message appeared again.

The Rochester resident has always played the lottery but on December 16 the numbers well and truly came up.

He said: "I popped into our Co-op in City Way on the way to pick up some instant coffee, and decided to treat myself to a couple of Lucky Dip tickets for the Thunderball draw that night.

"I put them in my wallet and thought no more about it until that evening when I checked my tickets on The National Lottery app."

“As I scanned the ticket I didn’t get the usual message and instead saw a big £500,000 flashing back at me.

"I assumed my phone had a gremlin so came out of the app and tried again but received the same message.

"Totally confused, I bought the numbers up via the website, and cross checked them with my Thunderball ticket.

"I suddenly realised there were no gremlins and I had won half a million pounds.”

Len went to share the good news with his wife of 46 years, Hazel – who was asleep upstairs oblivious to the life-changing events.

He woke her by slapping her shoulder shouting: "Wake up, I've won."

Hazel said: "Often when he has bought a ticket he’ll go to bed saying ‘when I wake up in the morning I’m going to be rich’, so when he did wake me up I didn’t really believe him and assumed it was a few pounds.

"We checked the numbers on the ticket again and I then realised it was certainly a bit more than a few pounds."

He is now looking forward to fully-retiring from his role in the catering business and focus on one of his biggest life passions – pythons.

Len said: “We’ve worked pretty hard all our lives. At one point I was doing three jobs when the children were younger.

"While Hazel is very happy to carry on in her sales role in the building trade, I’m over the moon to take early retirement.

"Although I have a sneaky suspicion, with the new renovation plans that this win will make possible, I’ll be busier than ever.

“But when there are spare moments, I will be at the end of the garden in the adapted summerhouse caring for my collection of pythons.

"I grew up in outback Australia and I think that’s where my love of snakes has come from.

"Some people believe snakes are lucky, I don’t tend to believe that but when I look at that giant cheque for £500,000 maybe there is some truth in it after all."

The couple were saving up for a trip back down-under to visit their son. They were originally looking at making the trip next year but with the win, their plans have been pushed up to this year and into business class seats.

They also have two daughters who will be gifted a portion of the winnings with Len and Hazel saying "they too can enjoy the wonderful feeling this win has brought and the peace of mind a few quid in the bank can bring”.

The winning numbers are in for tonight's EuroMillions draw and Thunderball. The jackpot is £75m. A ticket costs £2.50. In September, a Briton scooped an enormous £171m Euromillions jackpots. Joe and Jess Thwaite from Cheltenham, Gloucestershire, took home the prize of £184,262,899. They have two children at primary school and recently moved into a new home. They bought bedroom furniture with their winnings.
Lottery ・ 29 November 2022
The Sun

Helen and Lee Kuchczynski won a huge Euromillions jackpot of £3.6m on July 12. They bought a detached house and a sports car with their winnings. Helen's first purchase as a millionaire was two bags of cat litter. Lee invested in a new £17 back-scratcher. The couple picked up their cheque at The Midland Hotel in Morecambe, Lancashire, on Friday. Their numbers were 14, 18, 24, 25, 50 and Lucky Star 6.
Winnings ・ 22 July 2022

A retired firefighter from Edgewater won $96,879 on a World Championship Poker fast play ticket. An anonymous Annapolis resident won the second-largest prize of $30,000. She bought four Bonus Crossword 4th Edition scratch-offs from Wawa No. 569-E. She plans to save some of her winnings and use the rest on home improvements. The store that sold the ticket earned a $300 bonus for selling a top-prize winning scratch off worth $99,999.
Lottery ・ 15 June 2022
The Sun

Players can claim the SUPER300 bonus code on their first three deposits only. The minimum deposit amount required to redeem each bonus code is $25. This bonus is not valid in the Live Dealer Casino. The deposit plus bonus amount is subject to a 45X playthrough requirement before any winnings can be withdrawn.
Michigan Lottery Connect

Bruce Wall, 58, from Augusta, Michigan, won $500,000 from the Michigan Lottery. He bought a ticket at the Augusta Shell gas station. The current Powerball jackpot stands at $82 million. Powerplay option multiplies non-jackpot prizes by up to 10 times to a maximum of $2 million for $1.50 per play. Powerballs are sold in 45 states, Washington D.C., U.S. Virgin Islands, and Puerto Rico.
Winnings ・ 24 January 2022
iHeart

Richard DeMay, 72, from Monroe, Michigan, won $1 million playing the Mega Millions. He bought the ticket on Christmas Eve and checked the winning numbers on the morning of Christmas Day. De May plans to take his family on a trip and save the rest of his winnings. The next MegaMillions drawing is this week.
Winnings ・ 14 January 2022
M Live

Jeffrey Phillips, 62, won a $1 million Mega Millions jackpot. He bought the ticket at Polly's Country Market in Chelsea. Phillips will use the money to buy a new house and a car. The last Michigan winner of a Mega Million or Powerball jackpots was the Wolverine FLL lottery club, which won $ 1.05 billion in March. A $2 million prize bought in Hartland in 2019 went unclaimed. Richard Lustig recommends checking tickets immediately. It's a good idea to check your tickets. For more information on Michigan Lottery, visit the official website.
Winnings ・ 13 December 2021

There is a huge £11.7m jackpot up for grabs in the Lottery Rolldown draw yesterday. The Thunderball numbers were also revealed last night. There are no draws on tonight.
Winnings ・ 12 December 2021
Yabby Casino

Country
Australia
The US Sun

The EuroMillions draw takes place at 8.45pm tonight. The Thunderball draw also takes places at the same time. Tickets for tonight's game can be bought from most supermarkets and convenience stores, as well as online and through the app.
Strategy Guide ・ 30 November 2021
The Sun

Tomorrow's Lotto Set For Life draw has a jackpot of £10k every month for 30 years. Seven Brits scooped £1m on the National Lottery on Saturday night.
Lottery ・ 08 November 2021
The Scottish Sun

No one won the National Lottery jackpot draw tonight. Saturday's jackpots is now £11.1m. 48 players managed to net themselves £1,750 in the Lotto main draw by matching five numbers. 3 ticket holders earned £140 each by winning four numbers and 3 won £151k each on Tuesday's EuroMillions draw.
Winnings ・ 28 October 2021

Winning Lotto numbers revealed with £8.7m jackpot up for grabs plus Thunderball latest

Winning lottery numbers revealed with £34m jackpot up for grabs

There was a £34 million jackpot on Tuesday's EuroMillions draw. Three ticket holders won £151,000 each after matching five numbers and one Lucky Star. The jackpots for Friday's and tonight's National Lottery draws are £46 million and £8.7 million respectively.
Winnings ・ 27 October 2021
The Sun

EuroMillions results July 16 LIVE: What are the winning EuroMillions numbers this Friday?

Samantha Young won £1million on EuroMillions. She bought two lucky dip tickets for the Euromillions draw on July 2. Paul, her husband, was playing one of the games at the time. They are working out how to spend the prize money. The next day she saw an array of zeroes on her online account. The couple have been together for 12 years and have two kids together. Their win was confirmed by Camelot. Euro Millions results are live on Friday, 16 July. For the five numbers with one Lucky Stars, the jackpot is £130,554.30.
Strategy Guide ・ 17 July 2021
North Wales Pioneer

Diane Bate, 70, from Rhyl has won a jackpot of £3.8m on the National Lottery. She was shocked when she checked her ticket on Sunday morning. Her husband Michael, 74, and granddaughter, 7, had to check the ticket to prove it wasn't a hoax.
Christmas ・ 19 January 2021