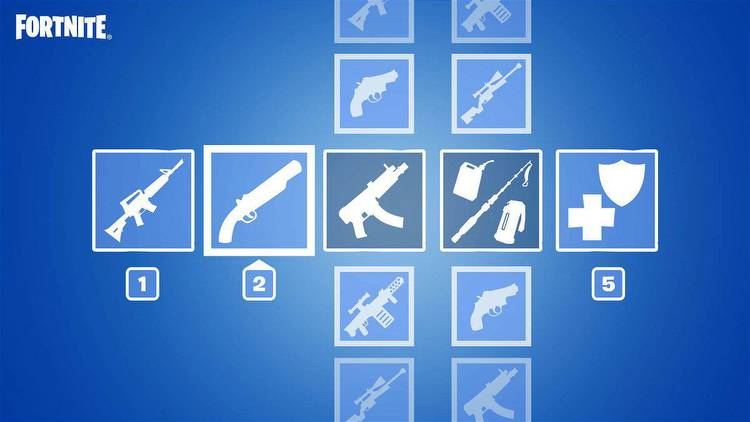 Fortnite has announced a massive gameplay feature with the game’s latest update. With update 17.40, fans have received a lot of new items like Bugha’s Icon Series skins, and other bundle and cosmetic collections as well. Along with that, they can also try the new reactive skins which has an extensive collection of wraps.

But the biggest change revolves around the introduction of Preferred Item Slots. This is the game’s new auto-sorting feature for weapons that should excite a lot of fans. They can control their loadout by adding preferences to designate an inventory slot for a certain weapon or item. When players find and pick these items, it automatically sorts itself to the slot designated by the players. Fans can choose the default configuration, but they can tweak it to fit their playstyle.

Fans of the game thronged towards Twitter to talk about the arrival of this weapon auto-sorting feature. Many of them felt positive about this change. But it had its naysayers as well.

A lot of players appreciated the implementation of the Preferred Items Slot feature. Many fans believe that this feature will make their life easier, especially during battles against other players where they might mess it up. Along with that, they have also mentioned that they love the customization for these slots as well.

Many of the popular Fortnite streamers echoed similar views about it as well. On Twitter, content creators like Nick EH 30 called it the best part about Chapter 2 Season 7 so far. Similarly, SypherPK and Typical Gamer also expressed their excitement for the feature as well.

However, some fans also felt that the Preferred Items Slot feature arrived a bit too late. Many players from the community have demanded for this feature since the start of the game’s first season. It may have arrived late, but fans love that the developers at Epic Games finally released it.

Like every new thing the developers try, Fortnite’s latest feature also has its fair share of detractors as well. On Twitter, three time FNCS winner TaySon expressed his displeasure towards Preferred Item Slots. He stated that it could lead to confusion while picking up guns from chests, which might cause them to be distracted.

It seems like Epic Games should have a massive success with the Preferred Items Slot feature. Many players have already showcased their configuration on social media platforms like Twitter and it seems like fans will try more experiments with it to see what suits them.

The Most Popular Online Multiplayer Games 2022

There will be 3.07 billion gamers worldwide by 2023. Fortnite, Call of Duty Vanguard, League of Legends and Rocket League are some of the most popular online multiplayer games right now. According to a recent review, game developers are having a massive impact on both younger and older generations.
Christmas ・ 9 hr

Why Gaming in the UK is More Popular Than Ever

Gaming has seen a rise in popularity within the UK.
Mobile ・ 22 days

The Most Popular Online Games Around the World

The list highlights the most popular online games in various cultures. The influence of culture is visible in the types and nature of games most common among gamers in a particular gaming nation.
Incidents ・ 29 June 2022

Half-baked battle royale with NFTs to launch on the Epic Games Store, pleasing nobody

Grit was announced in 2021 as a cowboy battle royale coming to Steam. It was delayed to January 2022 and later to February 2022. In February it announced a partnership with Gala Games, a blockchain gaming company. Grit is now an NFT game. N FTs haven't received a warm welcome in gaming. They are still resistant to the Epic Games Store in general. One of GIT's horse Nfts appears to be just a $30 asset from Unreal Engine 5's library. The game is called "Grift" on Twitter. There is no launch date yet. A link takes you to a Gal a Games site where you can purchase a "Gunslinger Box" where one of 10,000 Generative Characters can be bought.
Crypto ・ 07 June 2022

'I lost £25,000': Problem gambling soars in lockdown as fears mount for young Scots and children at risk

Samaritans Scotland wants to see gambling treated as a public health issue. Betting and Gaming Council has a zero tolerance approach to betting by children. BGC members introduced the whistle-to-whistle ban on TV betting commercials during live sport before the 9pm watershed. They also introduced new age-gating rules on advertising on social platforms. The BGTC's largest members pledged an additional £100m of funding between 2019 and 2023 for research, education and treatment services administered by the independent charity GambleAware.
Covid ・ 08 May 2022

Case opening CS GO websites are a great alternative to the complicated process of getting cases and rare skins when playing CS;GO. Bloodycase offers specially selected, valuable boxes at the most loyal price on the Web.
Crypto ・ 21 March 2022

or where is the gambling act?

The government is yet to release a draft Gambling Act. It's been a busy time for the sector. In Touch Games was fined £3.4m in March.
Law ・ 14 December 2021

How To Use Preferred Item Slots In Fortnite

How to use Preferred Item Slots in Fortnite. The new quality-of-life feature allows you to semi-automate the process of organizing your loot.
Incidents ・ 01 December 2021

Riot Games accidentally published an image showing the 7th item slot for in-game items. The developer is rumoring that the item is for a new ward. The current item has only one use, for wards or sweeping lenses.
Covid ・ 13 November 2021

Online gaming is booming, but it comes with risks. Cybercriminals can sell gaming accounts and players' personal information is exposed. Bots can manipulate resources in games and servers can be hacked. Online casinos in Canada use SSL encryption. The best online casinos use this encryption method. It is now the industry standard. There have been reports of 80 million Fortnite accounts being vulnerable. DDoS attacks can disrupt players’ IP addresses and hold platforms to ransom.
Trust and Safety ・ 04 October 2021

From Board Games To Console Games: 5 Of The Best Games Adapted For Mobile

The rise of online gaming has revolutionized the gaming industry. Classic console titles and board games can be accessed via smartphones. Cluedo and The Game of Life are among the classics that can now be played on smartphones and other online platforms.
Mobile ・ 09 September 2021

Gambling in video games has become a subject of debate. The development of technology has irreversibly changed modern life. In video game gambling is achieved with skill. The main difference between the concepts is that in games the outcome is obtained with the skill, whereas in gambling the situation is reversed. It seems that the two concepts are in an inseparable connection.
Games ・ 03 September 2021

There are many free online games with bonuses. 7 best games are listed here. They are: "Free Games with Bonuses", "No Money Game", and "Online Games With Free Bonus".
Top and Best ・ 26 August 2021

The Most Addictive Gaming Apps In 2021

Fortnite: Preferred Item Slots Guide, How To Use

Preferred Item Slots have been added to Fortnite. Gamers will have their firearms and essentials show up in the same tab each time they grab them.
Strategy Guide ・ 21 July 2021

How to use Fortnite's new Preferred Item Slot system

The new Preferred Item Slot system was added to Fortnite's 17.20 update. It allows players to sort items into their preferred slots. The system has been requested by players since June. Here's how to use it. The update also introduced World Cup winner Bugha as an ICON Series skin.
Incidents ・ 20 July 2021

Preferred item slots are a new feature in Fortnite. They let you place items in certain slots automatically.
Mobile ・ 20 July 2021

There is pressure on game developers about loop boxes used in video games.
Law ・ 05 July 2021

Epic Games may introduce a preferred slot item type feature in Fortnite. The new feature would let players sort their weapons according to their preferred slots. The current season 7 of Fort nite has already introduced a new battle pass, map changes and new weapons. There are more weapons to sort out in the middle of matches.
Slots ・ 29 July 2021

Online gaming is where it's at: The best websites full of games to enjoy

Online gaming is hot thanks to the pandemic. It's a fact of life. There are many websites with games to play. They are compiled to help you find the best one. They also have recommendations on which websites to visit if you're looking to purchase a game.
Industry ・ 08 February 2021