Footage leaked of cancelled Scarface 2 game based in Las Vegas 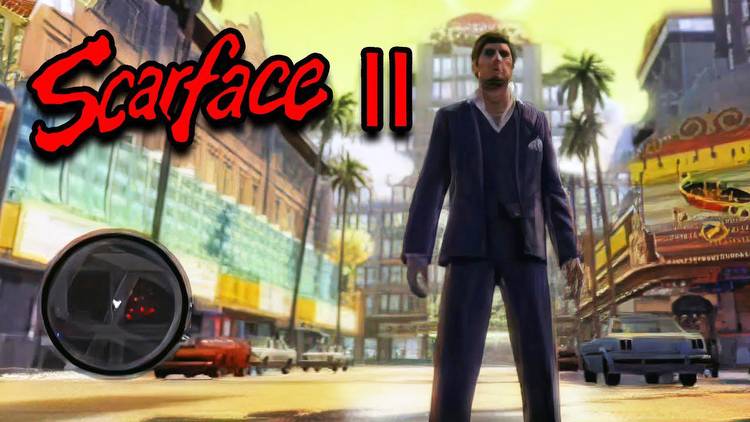 New footage of the cancelled open-world game Scarface: Empire, the sequel to 2006’s Scarface: The World is Yours, has appeared online, showing both concept art and some gameplay mechanics, in a video published by the aptly named Mafia Game Videos.

Crime and gangster video games have been big business since the original Grand Theft Auto was released for Sony PlayStation, Microsoft Windows 3.1, and MS-DOS back in 1997. A wealth of titles have been released in the ensuing 25 years to try and entice gamers away from the GTA franchise, including the uninventively titled Mafia, first released in 2002 by Illusion Softworks, and tie-ups with films such as the popular title Scarface: The World Is Yours, released in 2006 for PlayStation 2, Xbox, and PC by Radical Entertainment.

The World Is Yours was not an exact adaptation of Brian De Palma’s 1982 classic movie, but instead created a world where al Pacino’s character, Tony Montana, survives and lives to exact revenge on those that tried to oust him and re-establish his Miami cartel. The game was relatively well received by critics at the time, with many comparing it favourably to Grand Theft Auto: Vice City, which was released a couple of years before, but it never matched the GTA franchise in terms of popular appeal and sales.

Nonetheless, the game was still profitable for the studio, and so they started work on a second instalment, known as Scarface: Empire, where Tony Montana would flee the heat in Miami and try to setup his “business” in Las Vegas, which was reported to be setting up a casino whilst running a more traditional “mafiosa” business of drugs and enforcement behind the scenes.

The newly leaked footage from Empire sheds some light on how the game might have looked. And whilst the graphics and gameplay certainly look like they are from 2008, it is interesting to consider the direction Radical Entertainment may have taken the franchise had Empire ever seen the light of day. Much was made of the GTA: Diamond Casino & Resort. It sat within a context in which online casinos had spiked in popularity and a large portion of the population was familiar with establishments where they could play roulette, blackjack, and poker from a desk chair or on a mobile phone. Moreover, these players have come to expect a wide variety of each of these types of games from online casinos – casinos typically offer European, American and Lightning roulette, for example.

So, with Tony Montana taking control of a Las Vegas casino, could the Scarface franchise have beaten GTA’s casino to the punch and released a full casino game within a game, where players could play their casino favourites while taking a break from Tony Montana’s “other activities”?

The leaked video, dated June 6, 2008, shows Tony Montana evading police and shooting his way through the streets of Las Vegas alongside a variety of animation tests and a number of scenarios for a “second chance” game mechanic that would initiate after the protagonist takes too many shots to the chest.

In the end, Scarface: Empire never made it to PCs or gaming consoles as the title was indefinitely shelved by Activision after they acquired Radical Entertainment in 2008 and the company decided it had too many open-world games in development at the time and did not see a future for Tony Montana. Gamers never got to enjoy Scarface: Empire, but with today’s love of nostalgia, could Tony Montana have another adventure in a franchise reboot?

The year 2020 forced the world to take a giant leap forward. The Corona Virus pandemic forced friends and loved ones apart. Both children and adults turned to online entertainment to pass their time. Video gaming and online gambling have seen massive spikes.
Games ・ 20 days

Are casino games worth playing on a PlayStation 5?

The PlayStation 5 is the best gaming console. Casino-themed games have always done well. Some titles are specifically designed with casino gaming at the forefront of any planning. Others are mainly based outside of a casino but provide players with the opportunity of sampling the odd game of poker or walking into a busy Las Vegas resort.
Games ・ 14 July 2022

PlayStation 5 is one of the best consoles ever created. With the PS5, you can play arcade, sports, and adventure games. Online casinos are incorporating betting into digital entertainment. The virtual banking option on console betting games makes them more realistic.
Games ・ 19 May 2022

Online casinos and games inspired by your favorite video games

Online casinos and games inspired by video games are becoming more popular. We take a look at the different ways you can see video game influences in your favorite casino games and casinos.
Games ・ 18 May 2022

Funny and interesting things you can do in open-world games

Open-world games are a new genre of video games. The term came into existence after Grand Theft Auto. They offer freedom gamers accustomed to role playing board games were lacking in video game. They are available on many platforms, including virtual consoles and mobile phones. Here are some funny and interesting things you can do in open- world games, as well as some tips on how to play them.
Mobile ・ 14 May 2022

The best casino games you can play on your PS5

The PlayStation 5 is one of the best gaming consoles of its generation. There are many genres of games you can play on the PS5. Casino games are not exempt from the vast category of PS 5 games. Playing online poker in games on your PS4 feels like playing online gambling in Croatia.
Games ・ 09 May 2022

The Best Casino Games for PS4 to Spend Time On

PlayStation is the most popular console in the gaming world. People of all ages use it to play their favorite games online and offline. Online gambling games are not much different from other video games that you can play on PlayStation 4. The main difference is that one doesn't have to leave the comfort of his home to place bets.
Games ・ 26 April 2022

The gaming industry is worth over $200 billion. More than two billion people around the world play games on their computers, consoles, and mobile devices. New consoles and devices are constantly introduced to us. e-sports arena and online platforms like Twitch and Varid are also growing in popularity.
Industry ・ 31 March 2022

Should studios develop online slots that appeal to younger audiences?

There has been an intense spotlight shone on gambling-related harm in the last few years. The rise in popularity of loot boxes in games such as FIFA, League of Legends and Overwatch has raised concerns about young people being exposed to gambling. Critics have pointed out that some developers have created online slots that may appeal to young audiences. Some slot sites use them in a bid to attract new customers.
Incidents ・ 18 March 2022

Can you play real money casino games on Xbox?

Online casinos have increased in popularity over the years. Will they come to Xbox?
Games ・ 17 March 2022

The Best Casino Games to Play on PS5

The PlayStation 5 is one of the most powerful dedicated gaming consoles ever made. It has a variety of games for different types of gamers. Some of them are casino games. Online casino game are usually played on PCs or mobile devices. However, some of these games can be played natively on PlayStation.  In this article, we are going to go over some the best casino gaming titles for PlayStation and discuss some games that are available for the PlayStation5.
Games ・ 11 January 2022

Online Games to Play When You're In-Between ebooks

Online games are a good way to relax and unwind when reading ebooks.  Here are the best ones for you to try. i.e. Online Games to Play When You're In-Between eBooks.
Incidents ・ 02 November 2021

The Games With the Most Iconic Soundtracks Ever

Video games are one of the most popular forms of entertainment today. There are plenty of great video games released every year. However, occasionally there is a game with an iconic soundtrack that stands out from the crowd.
Incidents ・ 10 September 2021

Movie-themed games are popular online. This article lists some of the most engaging movie-inspired games.
Movies ・ 10 August 2021

Why PlayStation fans should check out online casinos

The next generation PlayStation 5 will be released. Online casinos are a new form of console gaming. They are inspired by the styles and content of successful video games. PlayStation games benefit from the rich history of casino entertainment. The PlayStation players could discover a whole new world of adventure on online casinos.
Blackjack ・ 23 June 2021

Online casino platforms have already dominated the gaming console market. Most attempts to bring the casino atmosphere to PlayStation or any other console have been disappointing. Vegas Party (2009) is a review of Vegas.
Religion ・ 07 May 2021

On July 23, 2019, Rockstar unveiled The Diamond Heist and Resort update for Grand Theft Auto V. The free-to-play expansion strives to add heightened realism to the game and sustain immersion levels. GTA V may have opened the door to a casino-inspired future within console games.
Incidents ・ 23 July 2021

The Best Casino Games for PS4

PlayStation is a popular gaming console. Online gambling games are similar to those you can play on PS4. On this page, you will find the top five games for PlayStation.
Games ・ 22 January 2021

The Diamond Casino of GTA Online allows its players to participate in various gambling games. This guide will help players learn the rules of each game and learn how to bring the most money home. GTA is a popular video game series. It is over 7 years old and is free to download. The Diamond and Casino Resort update was prevented from being released in countries with more strict gambling laws. There are a surprising number of children who own GTA games and they are often involved in the GTA series as well. The GTA game is popular despite its mature rating. For those who have never gambled before, this guide is helpful.
Strategy Guide ・ 19 January 2021