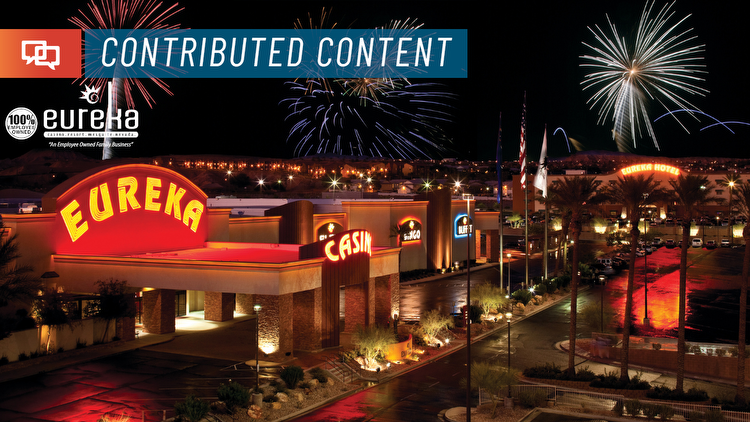 Eat, drink, play, relax or party – whatever you’re into, the Eureka Casino Resort in Mesquite, Nevada, has it all. Just a half-hour’s drive south of St. George, Eureka welcomes locals and visitors this summer with a Fourth of July extravaganza and the chance to become $1 million richer.

Eureka’s annual Independence Day tradition continues with the best fireworks show in southeastern Nevada. The “Rockets Over the Red Mesa” spectacular will be held July 4 at 9 p.m. PDT. Launching from the mesa behind the resort, the display will be synchronized with a stirring patriotic program broadcast via Nevada Public Radio (88.1 FM).

Eureka spokesperson Ashleigh Mark said thousands of people attend the show each year, coming not only from Mesquite but throughout the region to make the resort their destination for a fun-filled Fourth of July weekend.

Produced by Las Vegas Display Fireworks Inc., “Rockets Over the Red Mesa” is always a dazzling show, and this year will be no exception. The display is designed for great viewing from across the city as well as the Eureka parking lots. Guests are encouraged to bring their own chairs and tailgate.

“I’ve seen a lot of fireworks over the years, including stadium shows,” longtime Mesquite resident Jon Hoover said. “Eureka‘s show is so much better because you’re up close, and the background of the mesa is breathtaking.”

If you’d prefer to come early, stop by the Town Square Buffet and enjoy all-American barbecue favorites from 4-8 p.m. Additionally, the casino is offering double points on all slot machines July 1-4.

July will also see the return of the Splash into Cash million-dollar slot and video poker tournament series. Starting July 1, any player who earns at least 1,000 points can qualify for a semifinal tournament. Participants must swipe their player’s card at the kiosk and print out a reservation, then bring it to VIP services to register for scheduled tournament times.

The video poker tournaments will be held July 15-17 and Aug. 12-14, while the slot tournaments are scheduled for July 29-31 and Aug. 26-28. Players have the opportunity to win cash, and the top 75 scorers from each tournament will move on to the finals in September. There’s a million dollars up for grabs by the player who qualifies for and wins both the final video poker and slot tournaments.

This is the second summer that Eureka has invited players to Splash into Cash. This year’s tournament features new, interactive machines with touchscreens and bonus features. Plus, at the end of each round, the machines display the player’s ranking.

“Our players love this format,” Mark said. “It mixes things up a little bit.”

Eureka always has exciting promotions and great reasons to visit. The 60-acre resort offers award-winning dining at Gregory’s Mesquite Grill and the Town Square Buffet along with an upscale casino featuring nearly 1,000 slots and video poker machines, plus a newly expanded William Hill sportsbook and live table games like blackjack, craps and roulette.

The resort was founded in 1997 by the Lee family and sold to its employees in 2015, becoming Nevada’s first 100% employee-owned casino. Eureka has consistently been named one of Fortune Magazine’s “100 Best Medium Workplaces” and a “Great Place to Work” certified company.

Eureka Casinos also operates the Rising Star Sports Ranch in Mesquite as well as The Brook, a casino in Seabrook, New Hampshire. The dedication of their hardworking employee-owners extends to each and every guest and the communities they serve.

#InTheSpotlightFGN - Nevada #gaming revenue continues $1bn+ streak #Nevada has reported $1.27bn in gaming revenue for June, making it the 16th month in a row that the state has surpassed $1bn in revenue.

Resorts Casino in Atlantic City, New Jersey, has reached a new agreement with the casino workers union. The Golden Nugget remains the last casino in the area without one.
Travel ・ 10 days

On the Fourth of July, people let the professionals handle the explosives while celebrating the day at Lake Las Vegas. The grassy hill next to the Village at the Lake filled with families. Garrett Wake hopes to make this a new annual family tradition with daughter Averie.
Covid ・ 05 July 2022

Las Vegas celebrates the Independence Day weekend with entertainment, fireworks, poolside parties and more. Caesars Entertainment will host a fireworks spectacular on the Las Vegas Strip at 8:30 p.m. on Monday, July 4. Station Casinos will put on a city-wide fireworks show at 9:00 p.,m., starting at Boulder Station Hotel & Casino. Summerlin Council Patriotic Parade will begin at 10:45 a. m. at the corner of Hillpointe Rd. and Hills Center Dr. in the Trails Village of Summerlins. Omnia Nightclub at Caesar's Palace hosts Above & Beyond on Sunday, 3rd July. DJ Nova will perform at Liquid Pool Lounge at ARIA Resort & Casin on July 3.
Travel ・ 03 July 2022

4th of July Fireworks Las Vegas 2022: Where to Watch

Caesars Palace will host the Las Vegas 4th of July fireworks 2022 extravaganza in the heart of the Strip this year. Hotel availability in resort casinos is plentiful and prices remain reasonable over the holiday weekend. All listings featured in this story are independently selected by our editors.
Land-based ・ 02 July 2022

July 4th celebrations are going on in cities and counties across the country. Las Vegas has fireworks shows, parades and festivals.
Travel ・ 01 July 2022

Seneca Resorts & Casinos is hosting fireworks shows at its Niagara Falls properties on July 4th. The company tries to provide an unforgettable experience to its local communities in Western NY.
Travel ・ 30 June 2022

July 4th falls on a Monday this year, so there's a long weekend to enjoy the holiday. Pennsylvania casinos are filled with things to do for the July 4 th weekend.
Sports ・ 28 June 2022

Station Casinos will light up the skies around Vegas on the Fourth of July: Travel Weekly

The coordinated launch of each display will be one of the largest displays in the Las Vegas Valley. The shows will have a synchronized playlist for guests to listen to. Green Valley Ranch and Red Rock will offer fireworks-viewing parties from their main pools starting at 7:30 p.m. Tickets start at $10 for children 2 to 11 years old and $25 for those 12 and older.
Travel ・ 21 June 2022

Eureka Casino Resort partners with Stephen Wade Auto Center for The Big Ride. Two grand prize winners will each receive $50,000 to use at any Stephen Wade dealership. The competition runs from March 1 to April 9. Participants must be part of Eurek's Gold Club to accumulate points. The final drawing will take place on April 10 at 6 p.m. PST. Stephen wade offers the largest selection of new and used vehicles in St. George. It features 13 brands with makes and models to fit every lifestyle. They are located on the same block.
Travel ・ 03 March 2022

Las Vegas visitation in July strongest since onset of pandemic

July was the strongest month for visitation to Las Vegas since the start of the pandemic. 3.3 million people visited Southern Nevada last month. Hotel occupancy is still off by 12% compared to July 2019. The average daily hotel room rate for July was $127.90. For the first seven months of 2021, Las Las has welcomed about 16.8 million visitors.
Covid ・ 27 August 2021

After the Fourth of July fireworks, Pennsylvania casinos are open without capacity limits. Vaccinated visitors are not required to wear masks and the plexiglass has mostly been removed. Smoking is once again permitted indoors at casinos.
Winnings ・ 08 July 2021

The top jackpot sum at Nevada casinos was almost $1.4m over the Fourth of July weekend.
Religion ・ 07 July 2021

Plaza Hotel and Casino celebrates 50 years in Las Vegas with fireworks. The plaza is holding fireworks celebrations on Saturday and Sunday. Las Vegas is celebrating the Fourth of July this weekend. The Strip will also have a fireworks show on the 4th. You can find a full list of events and shows by CLICKING HERE.
Covid ・ 03 July 2021

July 4th 2021 is going to be a big one. Bring the whole family and celebrate Independence Day in the USA with the best fireworks in Las Vegas.
Travel ・ 17 July 2021

There are fireworks shows and events planned around the Las Vegas valley to celebrate the Fourth of July.
Blackjack ・ 22 June 2021

There are fireworks shows and events planned around the Las Vegas valley to celebrate the Fourth of July.
Blackjack ・ 23 June 2021

Plaza Hotel & Casino is celebrating 50 years in downtown Las Vegas with fireworks in July. The big summer weekend will be July 2 - 4 as the Plaza marks its 50th anniversary and the Fourth of July holiday. Guests can book a room for the Independence Weekend with a $50 food and beverage credit, up to $75 bingo match play, and access for two to private rooftop pool parties every night. On Friday, July 1, The Comedy Works at the plaza will welcome headliner comedians Robert Kelly and Kurt Metzger for a special 8 p.m. show.
Land-based ・ 25 May 2021