ECA announces winners for European Dealer Championship 2022; event to return in 2023 in Cyprus 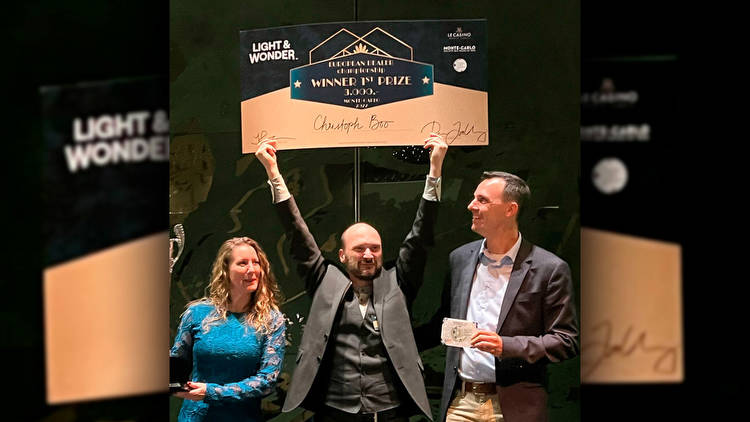 The European Dealer Championship concluded at Casino de Monte-Carlo in Monaco on 18, 2022. It was the 14th edition of the event. There were 40 participants from 23 different European countries. Christoph Boo from Casino Zurich, Switzerland was named this year’s European Champion. Daniel Rhodes, Hippodrome London, and Zoltan Horvath, Casino Györ, came second and third. The event will return in 2023 in Cyprus.

ECA announces winners for European Dealer Championship 2022. Event to return in 2023 in Cyprus. Since its inaugural event in 2007, the European dealer championship has visited 13 countries and welcomed over 400 contestants and 2,000 spectators. The competition is the longest-running competition of its kind in Europe.

The European Dealer Championship took place in Monaco. Christoph Boo won the competition. The event was hosted by Casino de Monte-Carlo. It was sponsored by Abbiati Casino Equipment, Casino Helsinki & Tampere, Clarion Events, CTC Holdings, Dallmeier, Galaxy Gaming, Hippodrome Casino, Holland Casino and ICSE. The European Championship will take place again in Cyprus in 2023. Per Jaldung, ECA Chairman, is excited about the prospect of having Christop Boo back to judge the championship in the year 2024.

Cyprus has taken a place on the European casino map

HOW TO: play in a Monaco casino

The Casino de Monte-Carlo is the emblem of luxury gaming and named best casino in the world. The Casino Café de Paris is known for its innovations and abundance of slot machines.
Blackjack ・ 3 days

Europe offers its fair share of incredible gambling locations. The games are not as extensive as at an online casino like Casumo Canada, but the experience won't be sub-par if you enjoy high-end resorts and European cuisine.
Land-based ・ 11 days

Five of Europe's Largest and best casinos are listed on CasinoTop3. Europe is an important location for business. Online casino gaming has made big gains across Europe. Safe gambling is becoming more important in Europe, and the best European online casinos have the most safety features.
Travel ・ 27 June 2022

Neccton has won the Best Player Protection Product or System award for its mentor software at The Casino Awards 2022. The award was judged by an independent panel of industry experts. Necctons customers include STS, Casumo, CEGO, Play North, and PlayOJO. The company's customer roster includes leading online operators. Greentube’s head of UK compliance Adam Mason said that the software is the cornerstone of their Safer Gambling activity. It alerts the operator and can contact players who display critical behaviour directly.
Lottery ・ 21 April 2022

Casino of the year

Zitro has launched a new Megashare Lounge at the Casino Café De Paris in Monaco. It offers a progressive jackpot functionality. The Megashesare lounge is presented on 14 Fusion Slant cabinets. The new feature allows all players to win a portion of the accrued jackpots when the jack pot is hit by one of them.
Games ・ 23 December 2021

Zitro Games has announced a preview of its Megashare Lounge at the Casino Café de Paris in Monaco. The supplier will let customers sample its new jackpot feature. It is a progressive jack pot function that allows everyone to win a portion of the accrued amount when the jackpots is hit by one player.
Winnings ・ 23 December 2021

European Casino Association awards four EDP 2021 Diversity Scholarships. The scholarship covers the full cost of the Executive Development Programme. It is a prestigious course offered by UNLV International Gaming Institute, University of Nevada, Reno College of Business and Extended Studies. The ECA has awarded four candidates working in Monaco, Slovakia, Sweden and Slovenia to take part in the programme. They are ambitious male and female colleagues from the European land-based casino industry aspiring to a leadership position.
Covid ・ 25 November 2021

How Do Casinos in Monaco Compare to the US Experience?

Monaco is known for its casinos and entertainment. Physical casinos are also known to bring celebrities and people from other cultures to the gambling establishments.
Religion ・ 03 December 2021

5 Of The Best European Gambling Cities

50% of the most visited destinations in 2019 were in Europe. Europe is home to some of most luxurious destinations for casinos. The rich heritage and glamour of Paris and London can be the ideal location for any partygoers. The four-leveled Vienna Casino is featured within the fabled Palais Esterhàzy.
Baccarat ・ 27 October 2021

Top 5 Biggest Euro Casinos In 2021 are listed below. European countries occupy one of the leading places in the world in terms of GDP. The economic development of Europe determines the development the gambling market. Euro casinos have consistently brought in a quarter of global gambling business income (€75.9bn in 2020). Some gambling establishments are going through hard times, for example, the largest European casino on Lake Como in Italy, which recently ceased its activity.
Top and Best ・ 17 October 2021

The most famous casinos are located in the United States and some countries in Asia. Europe is a world center for gambling. In recent years, gambling rooms have begun to appear in different states on the continent.
Top and Best ・ 04 September 2021

How does online live casino compare to Monaco’s casinos?

Monaco is famous for its casinos. Online live casino is not available in Monaco. Monaco's casinos are famous to provide superb service to all visitors and patrons.
Live Gambling ・ 03 August 2021

Destinations Where Casino Gaming Is an Important Part of Tourism

Destinations where casinos are an important part of tourism are listed here. People who travel internationally are 19 percent happier than their peers who haven't. Online casinos and land-based casinos can be a big draw for tourists.
Travel ・ 23 June 2021

Top Casino's around the world you should visit

The first European gambling house was established in Venice, Italy, in 1638. Macau and Las Vegas are the most popular casinos in the world.
Baccarat ・ 13 February 2021