Denver Broncos give Albert Okwuegbunam some reps in the slot 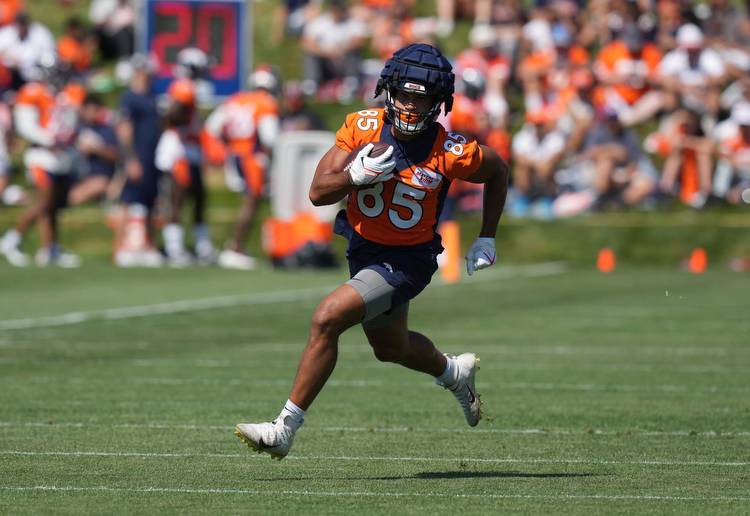 The Denver Broncos are dealing with the loss of WR Tim Patrick, and one way of replacing him is putting players like Albert Okwuegbunam in the slot.

As the Denver Broncos continue to figure out what life after Tim Patrick looks like, one option that has always been available is to start flexing players like Albert Okwuegbunam and Greg Dulcich out, either as big slots or play them out wide.

Although Friday’s practice was not fully padded and was more of the “jog through” variety, Albert Okwuegbunam getting some reps on the slot is not a small deal here.

The Denver Broncos understand that Okwuegbunam is one of the team’s most special talents offensively with his combination of size and speed, and this year — his third season in the NFL — is going to be huge.

It felt like Okwuegbunam wasn’t making enough noise early on in training camp and that his star has been outshined thus far by the likes of Eric Saubert and rookie Greg Dulcich, but the Broncos might be more impressed with Albert O. than we all know or think.

Okwuegbunam had a big catch-and-run in the team’s simulated two-minute drill on Thursday and he’s slowly but surely become more incorporated at practices, especially lately it seems.

Putting Okwuegbunam in the rotation as a big slot is going to help the Denver Broncos “replace” Tim Patrick in a couple of ways.

Maybe not the most important but something worth noting — Tim Patrick is a 6-foot-4 receiver with a big catch radius. The Broncos could have a successful offense without multiple 6-foot-4 receivers but having multiple guys out on the field with that kind of room for error in the passing game is a nice luxury to have.

Perhaps the most important reason why Okwuegbunam could be split out as a big slot or even flexed out wide?

His ability to block from those positions.

Apparently, the Broncos have been impressed with the strides Okwuegbunam has made this offseason as a blocker, and that was as an in-line player.

As a big slot, Okwuegbunam could be a huge asset on runs outside of the tackle where his athleticism and length could help seal off linebackers and defensive backs at the second and third levels.

That was an area where Tim Patrick really excelled — open-field blocking in the running game and finishing blocks to help make big runs even bigger.

The Broncos will certainly miss Patrick’s pass-catching abilities, but his willingness and excellence as a blocker was such an underrated trait.

And that’s where the tight ends will likely be asked to pick up the slack, even more so than just being a bigger-bodied target in the passing game.

The Broncos have a variety of players that can win in the passing game, including their tight ends, but Okwuegbunam’s role in 2022 might have gotten a little bit bigger with the unfortunate injury to Tim Patrick.

And it might end up increasing his value significantly.

BetMGM becomes official partner of NFL in Canada Wednesday 10 August 2022 - 9:00 am Entain-MGM joint venture BetMGM has agreed a deal that will make it an official sportsbook partner of the National Football League (NFL) in Canada. The deal comes... 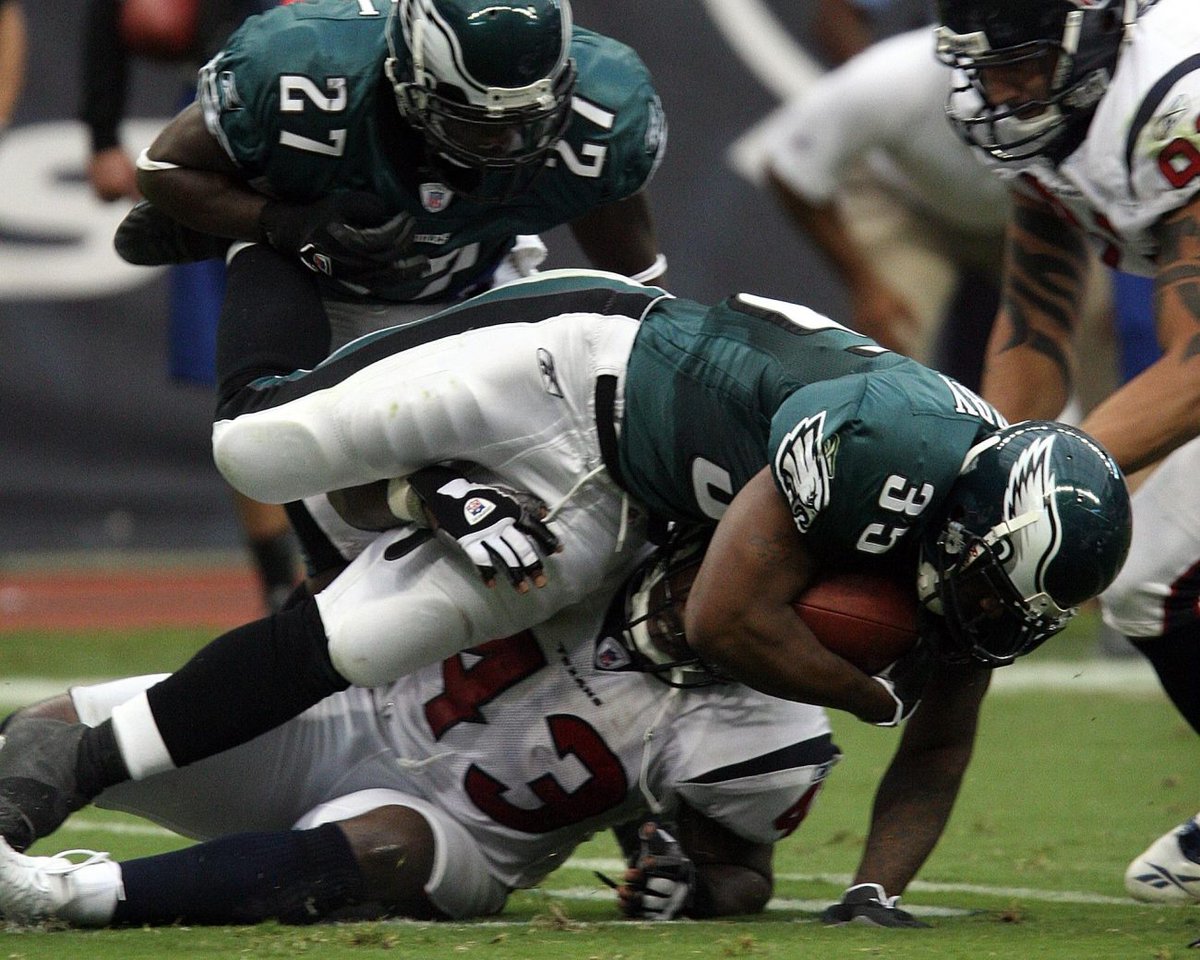 Free slots: What they are and how to play for free

Free slots are a type of casino game that you can play on the internet. They are similar to the slot machines you would find in a land-based casino.
Strategy Guide ・ 6 days

Isle Casino Hotel Black Hawk in Denver has reopened under the Horseshoe brand. The venue features a renovated exterior and "reimagined" casino floor. It consists of a 42,400-square-foot gaming complex with more than 900 slot machines. Roxy Restaurant and Bar will be joined by Brew Brothers later this year. Blackhawk is a former mining town west of Denver and is home to around a dozen casinos. Its mayor called Hoursesho a "legendary casino property and a legendary name"
Poker ・ 11 days

Last season, NFL defenses faced 18.676 pass targets and 8,069 of them were addressed to slot defenders. Davante Adams is the NFL’s best receiver, and he spent a third of his 2021 snaps in the slot. Mark Andrews, Mike Gesicki, Travis Kelce and Cooper Kupp are among the top tight ends in terms of snaps played in slot positions. Only four players from last year”s list made this year's list. Mark Schofield and myself will publish a list of 14 slot defender for the 2022 NFL season. It will be followed by our list of the league“s top 101 players.
NFL ・ 17 July 2022

Farabaugh believes that Chase Claypool should be moved to the slot. He had a good rookie season with the Steelers but was inconsistent. He played mainly as a Z receiver, which puts him on the outside and off the line of scrimmage.
NFL ・ 11 July 2022

The NFL halftime is the least favorite part of the game for many fans. It takes around 12 minutes and is usually followed by a break for fans to eat.
Games ・ 12 July 2022

These slots were adapted from video games

Video games are often used as inspiration for casino slot games. These slot game are inspired by both modern and retro games, with the best ones being some of the most popular.
Games ・ 15 April 2022

Gamzix has launched a game reskin dedicated to Saint Patrick’s Day - Hot Patrick. It's easy to play and it's free. The theoretical return to player rate is 96,2%.
St. Patrick's Day ・ 14 March 2022

Patrick Duffy played Bobby Ewing in Dallas and The Man from Atlantis. The show and the legend of Atlantis inspire people to imagine strange worlds. NetEnt has created a slot called Secrets ofAtlantis. It's available at TwinSpires Casino right now.
Strategy Guide ・ 21 October 2021

Is Online Gambling Legal in Texas?

Texas is one of the least tolerant states towards gambling. The only forms of legal gambling in the Lone Star State are charity bingo, raffles, horse racing and tribal gaming. Tribal casinos can only offer Class II gaming, which relates to poker and bingo-style games. Texas is in a minority of states that don't offer traditional (Class III) casinos. Las Vegas Sands Corp. tried to lobby hard for Texas casinos, but their proposed bill didn't make it onto the legislative floor.
NFL ・ 01 August 2021

Jarvis Landry was traded to the Cleveland Browns. He has caught 236 passes for almost 3,000 yards and 13 touchdowns in three seasons. Landy is not ranked among the top 11 slot receivers in the NFL. He is underappreciated because of his large contract and lack of big plays.
NFL ・ 02 August 2021

Amendment 77 allows cities to opt-out of the $100 betting cap and allow new games. Black Hawk, Cripple Creek, and Central City have already approved the changes. New games may be introduced to casinos. The games must be accepted by the Limited Gaming Control Commission. Colorado will now give unlimited single bet wagers. The changes make it possible for the state of Colorado to become more competitive with other states providing legal gambling. According to Jessica Feil, leader of American Gaming Association, there were only bet limits in Colorado and South Dakota until the vote took place.
Travel ・ 19 January 2021