A GAMBLING chain is appealing Bradford Council’s decision to block its plans to open a city centre branch due to the “harm” it could bring.

The Council’s public health department made a rare intervention to push for an application to turn a former building society on Bank Street into a new gaming centre to be refused this Summer.

They claimed the plans, by Merkur Slots, were in an area of Bradford where there was a high concentration of people “vulnerable to gambling related harms.”

But the company had now lodged an appeal against that refusal, meaning the final decision on whether the plans can go ahead will be made by a Government appointed planning inspector.

Merkur Slots had hoped to turn the former Leeds Building Society building on Bank Street into a “bingo premises” that would open from 9am to midnight.

The same company has recently opened a similar business in a former Coral bookmakers at the top of Ivegate.

After the application for the Bank Street unit was submitted, the company said it would “return a vacant unit back to commercial use, ensuring it once again contributes to the local economy.”

But the location of the planned gaming centre – within 50 metres of five other betting businesses, and near the Citizen’s Advice centre, raised concerns with Bradford Council officers.

A partnership of Bradford Council’s Public Health department, the Reducing Inequalities Alliance - Bradford and Craven Health and Care Partnership and the multiagency Bradford Gambling Harms Reduction Partnership lodged an objection to the plan, saying: “This area has high levels of deprivation, and is very close to schools, colleges and university, as well as to drug and alcohol treatment services which are in close proximity.”

They said it could lead to a “high risk of harm to vulnerable people who live, work, study and socialise” in the city centre.”

Refusing the application, planning officers said: “There are links between gambling and mental health issues, with problem gamblers at least twice as likely to die from suicide when compared with the general population.”

They added: “The impact of another gambling associated establishment in this area, where there is already an overconcentration of similar uses, would be unsustainable, and removes opportunities for the area to adapt within its primary retail function.”

Even before the application had been refused, Merkur had threatened to appeal. In a letter to the Council the company said: “Other local authorities have challenged the impacts of Merkur Slots venues and used health impacts as a reason for refusal, despite having no evidence.

A Government inspector will make a decision on the appeal in due course.

We are delighted to have launched our new Lived Experience Council, comprised entirely of people with lived experience of gambling harms. The Council met for the first time last Friday & will provide expert advice towards our work. Find out more 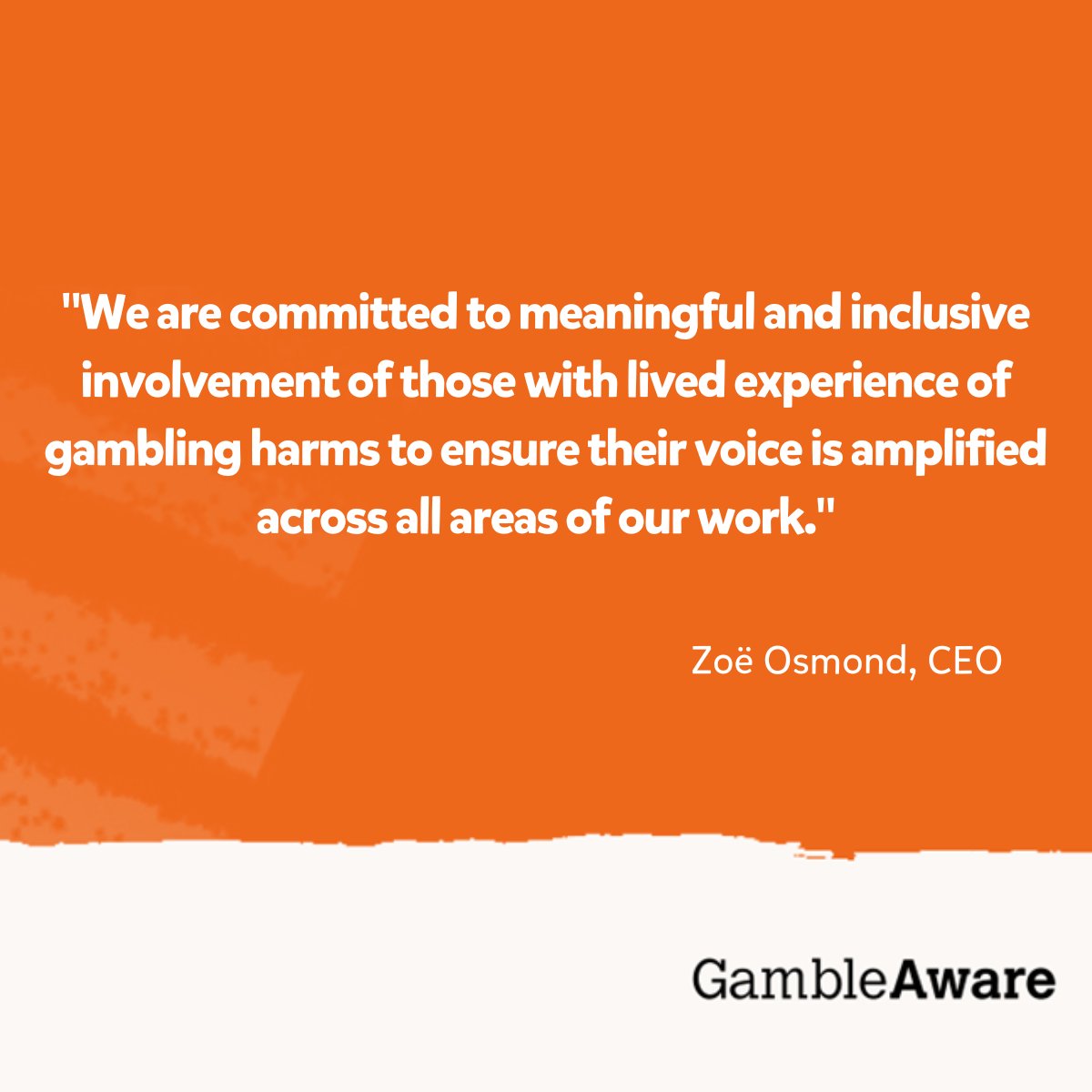 A lived experience council, using people with a variety of gambling harm experiences to help provide guidance on strategic developments, has been rolled-out by .

A brilliant starting panel on 'What does a Public Health approach mean to you?' with a great speech by @HBowdenJonesOBE and involving the inspiring @GambleAware Lived Experience Council members @sam_starsmore and

24-hour trial approved for adult gaming centre Merkur Slots in South Shields' King Street amid problem gambling concerns. Northumbria Police objected again and claimed the planning bid was a "reversal of a previous agreement". Green Party representative David Francis also objected to the plans. The application asked for the condition to be removed and for 24-hours opening hours to have been allowed at the site. The applicant said the venue would not increase anti-social behaviour, noise or any other crime and disorder. It also said there was no evidence that suggested a “correlation” between the 24 hours use and an ‘influx in crime in this part of South Tyneside’
Incidents ・ 10 days
Spalding Today

Merkur Slots has won permission to open a new adult gaming centre in Spalding town centre on October 10. The shop will contain casino-style gambling machines and bingo tablets. It will create 8 to 10 jobs.
Jobs ・ 05 October 2022

Merkur Slots won its appeal against the rejection of its change of use application to open an adult gaming centre in Hall Place. The Planning Inspectorate has approved the application. The new signage would 'harm the character and appearance of the area'. What do you think? Email your views to [email protected]
Politics ・ 12 July 2022
Worcester News

Merkur Slots wants to extend the opening hours of its gambling shop in Worcester to 24 hours a day. The current closing time is midnight. Shipley Amusement Centre in Broad Street was given permission to open 24/7. The move is part of a multi-million-pound regeneration project in the city centre. It will see the grade II-listed Scala Theatre and Corn Exchange buildings in Angel Street transformed into a new performing arts venue. Almost £18 million was awarded to the council from the Government’s Future High Streets Fund.
Finance ・ 05 July 2022
Super Slots Casino

Merkur Group’s UK subsidiary supports the next phase of the Mindful Resilience Programme launched by the Young Gamers and Gamblers Education Trust.
Finance ・ 17 May 2022
Telegraph & Argus

Gambling centre plans for vacant city centre building are approved. The building, 43 Ivegate, is 19th century, Grade II listed and has been vacant since early 2020. Merkur Slots wants to convert it into a gaming centre. It would open 24-hours a day and create at least eight jobs.
Jobs ・ 15 March 2022
Telegraph & Argus

Merkur runs venues across the country and has a Cashino venue in Shipley and Keighley. It will open a Slots unit at 43 Ivegate in Bradford. The company applied to Bradford Council for a bingo premises license for the unit. If approved it would allow the venue to host bingos from 9am to midnight.
Industry ・ 30 January 2022

Matt Amess placed bets of £80,000 over seven years as a gambling addict. He is concerned about a new gaming centre being built in Spalding.
Gambling Addiction ・ 07 December 2021
Yabby Casino

Gambling company Merkur Slots wants to open a centre in Spalding's former Dorothy Perkins store. The company applied for a change of use for the empty shop earlier this year and was refused by the planning committee. They are appealing the decision. South Holland District Council's licensing panel will decide whether or not the company can have a bingo premises licence for Hall Place. There are no police objections to the licence application. MP Sir John Hayes is among objectors. The Red Lion Hotel also objects. In April of this years there were 212 crimes reported within half a mile of the site and two were on Hall place.
Law ・ 27 November 2021
Spalding Today

Gambling company Merkur Slots is making a fresh bid to open up in Spalding's former Dorothy Perkins store. A licensing panel hearing next Tuesday (November 30) is due to rule on whether the firm can have a 'bingo premises licence' for the empty Hall Place store, which is being considered by South Holland District Council. Merur has previously been refused planning permission for a change of use for this building to a 24/7 adult gaming centre.
Bingo ・ 23 November 2021
My London

Silvertime plans to open a third adult gaming centre in Harlesden, North West London. Residents fear it will target vulnerable gamblers. Maggie Cox, who has lived in the area for 25 years, says there is no need for another gambling shop.
Bingo ・ 05 August 2021
Telegraph & Argus

Merkur Slots wants to open a gambling business in the city centre. Bradford Council refused the application this summer. The company has appealed the decision. A Government inspector will make a decision on the appeal in due course. It is within 50 metres of five other betting businesses and near the Citizen’s Advice centre, which raised concerns with Bradford council officers.
Industry ・ 08 November 2022