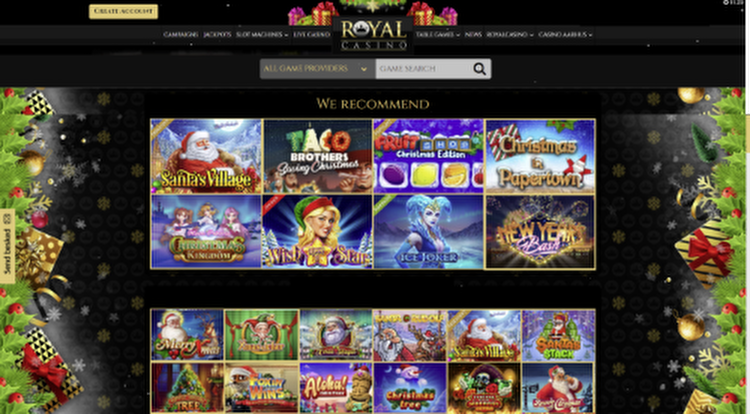 Christmas Big Bass Bonanza topped the Christmas charts and made the podium on the main games chart. Pragmatic Play launched Santa’s Wonderland this year. Arctic Enchantress from Microgaming performed well. Book Of Gold: Double Hit from Playson made it to the charts. Sahara Riches from Playtech made a place.

Pragmatic Play, Inspired Entertainment, NetEnt/RedTiger and the Microgaming family are the top-performing studios in the Christmas chart.

There were 65 Christmas-themed slots launched in the last few months. Some studios cut corners by releasing ‘Xmas Editions’ of existing titles.

Groove Gaming and Slotegrator have been busy plugging in new content and so now share top aggregator spot with Salsa Technology.

This month's review is a nod to other game types: Real Christmas Roulette (Real Dealer Studios) and the first ever Christmas crash game by Gaming Corps. Ho Ho Hodl sees Santa launch his sleigh into the skies with rocket style cashout/crashout decisions in a countdown to Christmas.

We’re putting another of our company values centre-stage, why ‘integrity’ is so important at Microgaming. 👍 𝗜𝗻𝘁𝗲𝗴𝗿𝗶𝘁𝘆 | We do the right thing. Always. Let’s find out more from the people at the heart of our business…

Let's take a deep dive into Microgaming’s corporate values, finding out why they are so important to our people and our business. ⏭️ 𝗔𝗴𝗶𝗹𝗶𝘁𝘆 | We see change as an opportunity. But what does it really mean to our people?

Bigger Bass Blizzard Christmas Catch is a slot game from Pragmatic Play. It follows other Pragsmatic Plays games such as Santa’s Great Gifts, Snakes & Ladders – Snake Eyes, and Gems of Serengeti. The game has a revamped winter aesthetic and a lot of exciting features. The free spins round offers up to 20 free spin prizes. There are also random bonuses to increase the excitement.
Christmas ・ 9 days

The Halloween Top 20 is based on game distribution across 2,000 operator sites. Crash games have taken off and appeal to a unique and growing segment. 30 crash games were launched by 21 studios. Aviator by Spribe is the daddy of them all. Astroboomers from Funfair Technologies and Gaming Corps’ Skyliner perform well.
Top and Best ・ 28 days
iGaming Business

There were no new titles this month. The established titles of Pragmatic Play, Evolution Gaming and Play’n GO swapped places. There were also 9 Pots and 9 Masks from Games Global. Big Catch Megaways is performing well. Pragsmatic play is dominant with three of their four Bass Bonanza variations in the top 10.
Top and Best ・ 13 October 2022
Super Slots Casino

Pragmatic Play secured its third Bonanza game in the charts last month with Sweet Bonanzaville. The Candy Crush-inspired game has spawned its own sequels. Live editions and operator versions of a game are rare.
Incidents ・ 19 May 2022
Yabby Casino

There is no change at the top this month. There is a battle of the product families brewing.
Bingo ・ 15 December 2021
The West News

As 2021 draws to a close, the online casino industry is on top of its game. Leading online game development studios are in a race to develop and launch the best real-money online slot games. Online casino experts and seasoned in-house slot reviewers have fastidiously tested all the latest November 2021 releases and ranked them based on objective, measurable metrics.
Christmas ・ 14 December 2021

Break Da Bank Again and Chilli Heat have been given a Megaways makeover.
Top and Best ・ 13 September 2021
iGaming Business