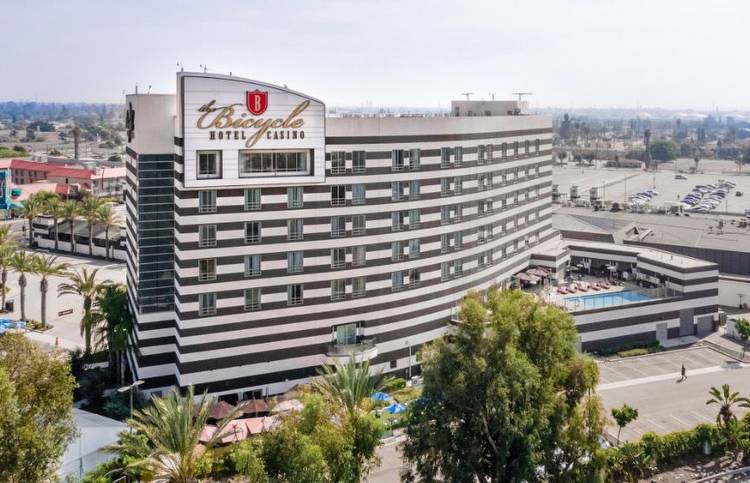 April 27, 2022~An owner of gambling facilities across California has anted up to buy a Los Angeles County hotel and card room, one of the nation’s biggest facilities of its kind, in a major deal for the industry that creates thousands of jobs in the largest U.S. county.

An entity related to Northern California gaming owner Parkwest Casinos bought the Bicycle Hotel & Casino site at 888 Bicycle Casino Drive in Bell Gardens for roughly $102 million on April 12, according to CoStar data and Jeff Van Wagner, a Los Angeles attorney who worked with the buyer on the deal. A separate entity, also related to Parkwest Casinos, bought the gambling business itself for an undisclosed amount.

Card rooms in California differ from casinos in that they don’t offer slot machines, and gamblers play games such as Texas Hold ’em against each other and not “the house.” The card rooms supply tables, cards and chips but generate revenue through small fees on each hand played.

California’s not alone in permitting these types of in-person card rooms, which exist in various legal or semi-legal forms in some U.S. states. In some Texas cities, for example, private clubs offer gambling that’s similar to California where these establishments allow players to bet against each other while charging fees to make money, but occasionally cities have moved to shut them down.

The Bell Gardens property is now called Parkwest Bicycle Casino, according to its website. It features a spa, eateries, a 99-room hotel and a roughly 100,000-square-foot poker room with 185 tables. The property tends to be the single largest contributor to the general revenue of the city of Bell Gardens in southeast Los Angeles County, according to the city’s website.

The deal was among the 20 biggest real estate sales in greater Los Angeles this year in terms of total price, according to CoStar data.

While Los Angeles is known for its film and entertainment businesses, the card room industry is a significant employer and economic generator in the region. The industry supports about 13,500 jobs and has a roughly $2.3 billion economic effect on Los Angeles County alone, with a statewide impact of roughly $5.6 billion, according to a November 2019 study.

These card rooms are essential to city budgets, too. The Commerce Casino, which calls itself the region’s largest card room, contributed to nearly half the city of Commerce’s total general fund revenue, according to a letter to the state in December 2019 from the Los Angeles County Business Federation, a trade group.

#TableMountainCasino Resort opens in #California The new hotel resort and casino in Friant is adjacent to the existing Table Mountain .

The apartment deal in North Las Vegas, Nevada, is among the region's largest of the past year. It's the latest of several Western U.S. acquisitions in 2022 by investment firm Tides Equities of Los Angeles.
Land-based ・ 20 days

Parkwest Casinos bought the Bicycle Hotel and Casino in Bell Gardens for $103 million in April. Comerica Bank is the trustee for the loan. Parkwest is planning to rename the casino ParkWest Bicycle Casino. The company operates five casinos in California. The Bicycle property is Park west's first in Southern California and in Los Angeles. It was the subject of a money laundering investigation. A Chinese national gambled there 100 times over eight months in 2016.
Baccarat ・ 13 May 2022

Stars Casino Will Move to New Location as Recovery Continues

Stars Casino in Tracy, California is moving to another location and facility. The industry is continuing to recover from the business restrictions imposed by the authorities in response to the pandemic.
Sports ・ 14 April 2022

WSOP Circuit At The Bicycle Casino In LA: What Went Down?

The World Series of Poker (WSOP) tournaments have been organized annually in Las Vegas since 2004. In 2005, the WSOP Circuit was launched in the USA. This year, it was hosted by the Bicycle Casino in Bell Gardens, California. There were 13 events and the winners of the 13 golden rings were handed out the seats for the Tournament of Champions in Vegas, scheduled for later this year.
Poker ・ 07 April 2022

Euro Games Technology's new line of EGT - Jackpot Bell Link has premiered to great success at Merit casino in Northern Cyprus. The first 12 General series 27-27 Upright cabinets with BellLink have been stationed in Merits Lefkosa Casino. Merites placed another order for Belllink Jackpots for the rest of their casinos in Cyprus, which further establishes Egt as the leader of the market in the region.
Winnings ・ 28 March 2022

Bicycle Hotel & Casino in Bell Gardens, California was fined $500,000 for not reporting a high-stakes gambler who visited the casino over 100 times in 2016. The casino also violated the law by filing the reports in the name of the gamblar's assistant. It was raided in 2017. The company has been operating since 1984. Its card games are poker, baccarat and pai gow. They have been featured on the televised World Poker Tour. Johnny L. Griffin III, the company's attorney, said the government confirmed there are no systemic faults within the compliance and reporting programs.
Poker ・ 11 February 2022

Bicycle Hotel & Casino in Bell Gardens will pay $500,000 to settle allegations it violated anti-money laundering laws. It failed to properly file reports about a Chinese player who spent millions in cash.
Incidents ・ 06 November 2021

New poll ranks Pechanga Resort and Casino in Southern California as the Best Casino West of Las Vegas. It is also the second-best Hotel Casino Outside of Vegas and the fourth- best Casino Hotel. Mohegan Sun, in Connecticut, Hard Rock Hotel & Casino Atlantic City and Foxwoods Resort Casino are the top three in the category Best Hotel Hotel, while Peachanga finished fourth. Peochanga has been on the USA Today's "Best of" list since 2015. In 2021, Peechanga will be recognized as best Southern Californian resort and casino.
Top and Best ・ 27 October 2021

Online gambling in California is becoming more popular. The laws that restrict the activities of virtual casinos in the United States have been approved. Americans can choose from thousands of independent online gambling sites.
Bingo ・ 17 September 2021

A Guide To Playing Casino Games in Santa Clarita

A guide to playing casino games in Santa Clarita. Charles August Fey invented the first slot machines in San Francisco. California doesn't allow slot machine in its casinos. Santa Clara residents can play online games. Hollywood Park Casino and Hotel is a short car journey south from Santa Claraita and the closest gaming establishment. . The nearest casino is in Los Angeles. It is 36 miles away. There are no land-based casinos in the Santa Clausita area. Online games can be convenient but they can't recreate the feeling of sitting in a hall full of dealers and excited chatter of other players.
Strategy Guide ・ 16 July 2021

There have been six outbreaks of gambling-related illnesses at tribal casinos in Riverside County in the last six months. The non-tribal casinos and cardrooms in California were closed last week. Hawaiian Gardens declared a fiscal emergency in August because of the Casino. Inglewood, Commerce and Bell Gardens are in a similar situation. Their casinos provide over 20 percent, 25 percent and 50 percent of their budget funds. Cardrooms have stricter health and occupancy rules than the tribes.
Covid ・ 19 January 2021