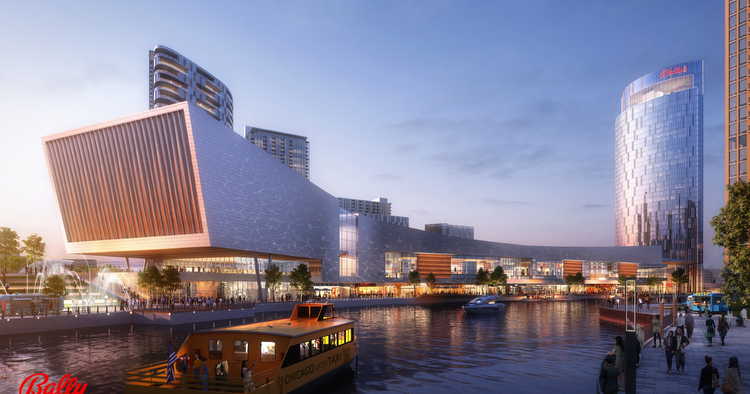 Money from Chicago's new casino already is rolling in years before the $1.74 billion gaming and entertainment destination even is constructed northwest of the Loop.

Rhode Island-based Bally's Corp. this week paid $40 million to Chicago in accordance with the casino development agreement recently inked between Bally's and the city.

The money is earmarked for Chicago's underfunded police and fire pension programs. The majority of the city's future casino revenues also will go toward its pension obligations.

"This is the first down payment from the casino on the future of Chicago's pensions and a clear indication of the city's commitment to its hardworking public safety professionals," said Mayor Lori Lightfoot.

Lightfoot said she selected Bally's, in part, because it offered the highest minimum capital commitment; the $40 million up-front payment and $4 million each year thereafter, in addition to wagering taxes; up to 6,000 temporary and permanent jobs; a labor peace agreement; and efforts to ensure the benefits of the casino are equitably available to all Chicago residents.

The mayor also noted Bally's has no other casinos in the Chicagoland market, unlike Hard Rock in Gary and Rivers in Des Plaines, Illinois — ensuring Bally's will be focused entirely on its Chicago property.

Bally's next must win approval from the Illinois Gaming Board to officially acquire the Chicago casino license created by the 2019 Illinois General Assembly.

The Bally's plan calls for its casino at Chicago Avenue and Halsted Street to open in early 2026 with space for 3,400 slot machines and 170 table games. That's slightly fewer gaming positions than the Horseshoe Casino in Hammond had at its peak about a decade ago.

For comparison, Horseshoe currently offers guests 1,790 slots and 119 tables, Hard Rock features 1,612 slots and 79 tables, Ameristar Casino East Chicago has 1,266 slots and 46 tables, and the Blue Chip Casino in Michigan City is at 1,432 slots and 30 tables.

Bally's also plans to build at its site adjacent to the Chicago River a 500-room hotel tower, a 3,000-seat theater, an outdoor park and music venue, a Riverwalk extension, six restaurants, a cafe and food hall, and other amenities.

In addition, Bally's expects to open a temporary casino with up to 800 slot machines and table game seats by mid-2023 at the Medinah Temple, 600 N. Wabash Ave.

Bally's River West proposal is a finalist for Chicago's first casino. The proposal would be located at the Chicago Tribune printing site. It is one of three bids for the project. A special committee has not yet finished its work. Bally’s has offered to pay $25 million upfront to the city. The other bidders have not offered up any money. All three proposals met opposition from local residents. They are concerned about the cost and the location. There are concerns about all the proposals.
Jobs ・ 10 May 2022