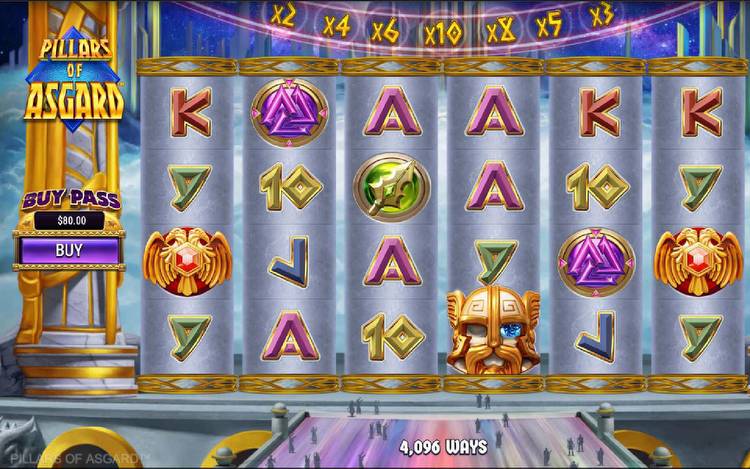 Atlantic City was closed since mid-March due to the outbreak of COVID-19. New Jersey online casinos have picked up the slack. On May 22, a Golden Nugget online casino member Scotty W, from Bridgeton, won $1 million on a single spin playing the video slot game Pillars of Asgard.

Scotty W won a million dollars at Pillars of Asgard at the Golden Nugget online casino. He plans to buy a home in Florida with his winnings. Tillman Fertitta, the owner of Golden Nugget Atlantic City, offered 10 free spins on Pillar of Odin for Memorial Day weekend.

One of the billion dollar buyer's loyal online casino patrons has become an instant million dollar winner in one spin.

A single spin of an online slot game made a man in New Jersey a millionaire. The game he won on is Pillars of Asgard. It has one of the highest return-to-player (RTP) percentages with 96.8%.

Scotty W won a million-dollar jackpot at Golden Nugget online casino in one spin. Biggest online jackpots won in New Jersey and beyond are on the lower end. The biggest online slot jack pot won by a Finnish man was 17.861 million euros in 2013. In 2016, Rawiri Pou won $10,144,395.82 on Mega Moolah progressive slot game.

Get that #Vegas feeling right from your computer or cell with the new Golden Nugget online casino! Play all your favorite games and slots with a $1000 welcome bonus + free spins. Use this Golden Nugget Promo Code

Golden Nugget Online Casino offers a variety of games for gamblers in New Jersey, Michigan and West Virginia. This month, the casino added two new Live Dealer games, a new variation of blackjack and several online slots. The bonus code: BONUSSPINS gets you $10 free on signup, plus a 100% deposit-match bonus up to $1,000 and 200 Free Spins on the 88 Fortunes slot.
Bonuses ・ 7 days

New Jersey online casinos had a decent showing in June with $133.1 million in revenue. It is just behind the previous record of $140.7 million set in March. Since going live in November 2013, the NJ online casino's popularity has grown.
Finance ・ 16 July 2022

Are Online Slots Worth It?

Online casino slots are some of the simplest and most enjoyable games to play. Some players enjoy them just for the entertainment value. Online slots could give a better return than a traditional casino.
Winnings ・ 12 March 2022

A player from New Jersey won $56,360 playing Divine Fortune at TwinSpires Casino. It's the latest big win from the NetEnt slot.
Winnings ・ 24 December 2021

Betfair and Golden Nugget Atlantic City have created a joint venture Betfair Casino NJ. It offers a variety of games to desktop and mobile players. Its sportsbook is available through the FanDuel brand. Fanduel Sportsbook offers up to $500 in site credit on a player’s first bet.
Bonuses ・ 15 July 2021

Play online with free spins at Hard Rock Casino Online. New Live Slots feature is available. First deposit bonus is worth up to $1,000 with a 100% match. Hard Rock is one of the newer online casinos in New Jersey.
Bonuses ・ 27 June 2021

PlaySugarHouse.com broke a record for the highest jackpot paid out in the continental United States to the tune of $535,000.
Winnings ・ 19 January 2021

RotoGrinders contributor Yisman won $219K New Jersey slot jackpot on Betfair Casino. The game has a 96.6 return-to-player percentage. There were 42 online slot Jackpots worth $50,000 or more in New York and NewJersey during April.
Winnings ・ 19 January 2021

Why Does The Divine Fortune Progressive Slot Keep Hitting In PA?