A Night With Cleo Slot Machine

Put together a games developer and the only famous female leader of the Ancient World… and whaddyaknow? Games developers are solely interested in releasing slots where the aim is to get her to take her clothes off. A Night With Cleo is many things, but it certainly ain’t subtle. It’d be fair to say that Proprietary Games aren’t going to win any awards for historical accuracy with this unashamed effort.

One Night in Egypt

A Night With Cleo is a 20-payline slot whose protagonist is a silicon enhanced seductress who’s positively bursting out of her top. A predictable backdrop of pyramids sets the scene and lets you know, lest there were any doubt, that you’re in Egypt. The sound effects and audio are subtle – the only subtle thing about this game in fact – and strangely soothing. In the base game, three or more matching symbols on a payline will trigger a win before a card gamble feature gives you a chance to double your money.

It’s debatable whether you’re playing this feature for the money or for the more alluring prospect of Cleo denuding, with a piece of clothing hitting the deck for every time you call the next card colour correctly. Get five right and you’ll get to see a whole lot more of the Egyptian queen than you could ever have imagined.

While Proprietary Games have put plenty of effort into their protagonist, they’ve applied less care to the game symbols which are a pretty uninspiring bunch. Most of them are playing card values, which have been styled to look Egyptian in some way or other. The remaining symbols are various precious treasures including a golden Eye of Horus which is worth 500 for five. There are 15 free spins to be won in this game, achieved by landing three or more scatters in view, and there’s a jackpot to be won which will be triggered randomly.

It’s hard to shake the sensation that Proprietary Games have come up with a concept – what would the Egyptian queen look like naked? – and then hastily cobbled a game together around that notion. As a consequence, the remaining elements of the game feel unrefined, or even rushed. Alluring as it might be for some players to catch a swatch of Cleo in the buff, it’s worth remembering that this is the internet, and there are cheaper and more gratifying ways of seeing some skin if that’s what you’re into.

More often than not, Microgaming are the developer who offer up similar games, and they’ve got a few efforts that can rival this Proprietary Games slot. Gold and Witch Dr are two such examples, each with 20 paylines and 15 free spins to be won just like A Night With Cleo. Vegas Dreams and Nutty Squirrel are two other candidates from Micrograming’s eclectic stable of slots.

For something a little different, you could try IGT’s Vegas, Baby, which has 20 paylines and 15 free spins to be won. A more suitable IGT option might be Mega Jackpots Cleopatra. It’s also got 20 paylines and 15 free spins with an RTP of 90% to 92.5%. Another Egyptian slot that plays in a similar fashion to A Night With Cleo is Ramses II by Novomatic.

By all means play A Night With Cleo, but don’t do so in the hope of gaining instant gratification from seeing Cleopatra in her birthday suit, for more often than not you’ll lose your money on the gamble feature before you get there. Despite its seediness, there is a strange thrill to be derived from playing A Night With Cleo, even if it’s not the sort that will leave you feeling good about yourself. Poor old Cleopatra. If only she could see herself how the world sees her today. 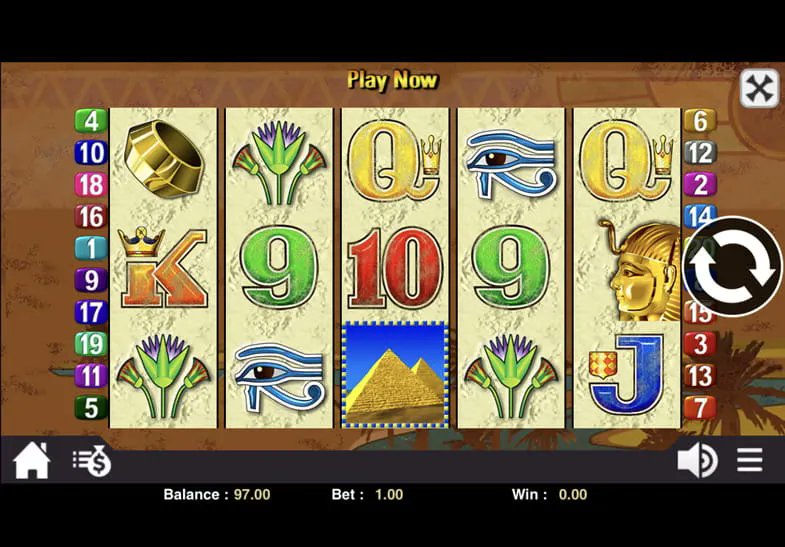 Cleopatras Gold #Slot Review – (RTG) #OnlineSlots for ⬇️⬇️⬇️⬇️ 🔴75 #FreeSpins limited time‼️🔴 Cleopatra’s Gold slot an amazing game that has an Ancient Egyptian-theme that will get your rewarded frequently. ⬇️⬇️⬇️⬇️

🎉Playson has taken one of its most popular ancient Egyptian-themed slots and given it the Megaways treatment in the Legend of Cleopatra Megaways slot! Did this trip to ancient times seduce us? 🤩

Endorphina’s newest Egyptian-themed slot is called Glory of Egypt. It features the Egyptian Queen Cleopatra and Julius Caesar. There are mechanics where scatters triggers free spins and retrigger them again during the free spin. The Scatter acts as a wild symbol and can substitute other symbols. There is also a possibility to risk it all in an Egyptian Risk Game.
Bonuses ・ 19 July 2022

The best slots to play at Bovada are listed here. The list includes seven games that I'm a fan of. They are in no particular order. The best BOVADA slots are available on the casino's website. For more information on BVada's top slots, visit their website here:
Bonuses ・ 01 June 2022

Cafe Casino: A Night w/ Cleo, Forbidden Slot Stars This or That Tuesdays

Cafe Casino LV announced on Twitter that they would be hosting This or That Tuesdays. This Tuesday's slot game will be A Night with Cleo or Forbidden Slot.
Mobile ・ 29 April 2022

Cleopatra is the Ancient Egypt's queen who had an affair with Caesar and Mark Antony. She committed suicide by snake bite. The Cleopatriot slot machine from IGT is one of the most successful slot machines of all time.
Strategy Guide ・ 16 December 2021

Humans have played games since the dawn of time. The oldest game pieces were found in southeast Turkey and dating back over 5,000 years. Senet is probably the world's oldest board game.
Religion ・ 30 May 2021

Cleopatra is a cult status pokie by International Game Technology. It was released in 2012. Several sequels to the poko have been released.
Bonuses ・ 07 May 2021

Battle Maidens: Cleopatra is a five-reel PC and mobile-optimized slot machine from 1X2 Gaming. Five women appear on the reels of the slot. They combine forces to trigger a free spins round.
Mobile ・ 14 days

The Asp of Cleopatra Slots

The Asp of Cleopatra video slot is a classic Egyptian-style slot machine. The game is based on the Egyptian asp, a snake that was a royalty symbol in Ancient Egypt. It is the highest-paying base symbol and other Egyptian symbols are found in the paytable. There are crystal clear graphics of Egyptian temples, golden frames and a matching ambient soundtrack.
Religion ・ 14 days

Try Out This Casino Game Now

Cleopatra III video slot machine is available to play at land-based casinos. It has 200 paylines of ancient Egyptian-themed slots action. The game features stacked wild symbols, free games and win multipliers.  Try Out This Casino Game Now. . ... For the time being, you will need to trek to a casino to spin these impressive reels.
Games ・ 6 days

The Cleopatra Gold slot machine from IGT is a popular game at online and mobile casinos. It has five reels and 20 paylines and is filled with iconic images from Ancient Egypt.
Mobile ・ 14 days

Magical beetles scurry across the Egyptian-themed reels of the Scarab Link slot machine. Pyramids, gods, and Cleopatra are among the other images seen across five reel and 50 paylines. Beetles have the power to transform into wild symbols at the end of each series of ten spins.
Winnings ・ 13 days

The Egyptian Gold online slot has five reels and 243 paylines. The wilds can expand the reel and scatters can trigger a variety of special features.
Gambling Sites ・ 8 hr